Thank-you for that.
I tried it out and it works beautifully.
And I feel incredibly stupid not having realized this worked that way. It would have saved me SO much time!!!

I will amend what I had originally written then!

An extra option would be nice:
Being able to define, project-wide, or program-wide, where exactly end-points of lines (and glissandi) end up.

For example, I wouldn’t want a line to end touching a staff line. It creates a certain visual confusion, so a bit of white space would be nice.

This would also apply to the starting notehead, where the diagonal line would begin higher if going up, and lower if going down.

I would love it if, when inputting onto both staves of a choir reduction instrument simultaneously, four voice textures would ignore the default split point and always assign 2+2 top down.

I could see that being very useful. As a more general request, maybe there could be a way to designate exactly how many notes to put on each staff when entering into multiple staves. Generally speaking, when I use that (amazing) feature, I just want one note per player. But every once in a while, I wish I could put 2 notes into one of the staves. It is a rare thing for me, but if they are handling the 2+2 case, why not also handle the 1+2+1+1 case and others? This could come up on string parts with double stops.

1-A réal mix console working.
2-correction of all bugs to have a stable version
3-a library of music content (as in sibelius, it is the only think i regret from sibelius)
4-a tempo function to make a tap tempo in live as a conductor
5-a 5th and octave correction for contrepoint’s studient
6-remote control assignable for CC1,11, …
7-help with the structure: sonata plan, symphony, ternary form, binary, simple, complex: it would be practical and pedagogical

As a suggestion, there is already something implemented in Dorico, in the current version, which can be improved, in my opinion.

It’s “Play all chord notes when one is selected”.

With some implement (improvement) for this function, it would be possible to hear 4-way Block chords written for a BigBand…
To improve this feature, I would like to suggest a possibility to create a shortcut to enable/disable it. Also, it would be great to use the left and right keys (arrows) to be able to play a specific selection of instruments (more than one instrument, in the current version this one only plays the selected instrument). 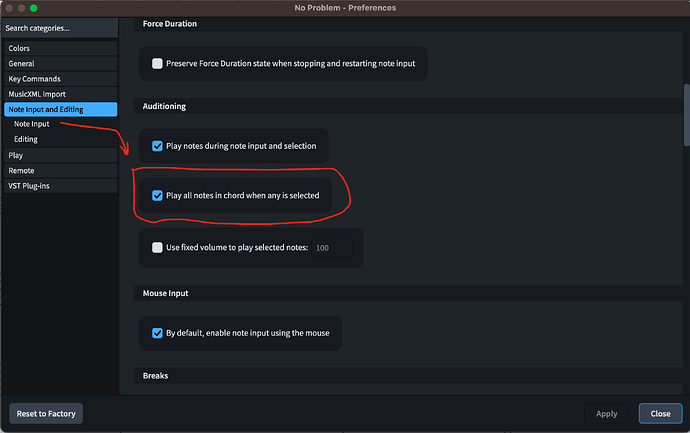 Ricardo, I think you’re basically asking for scrub playback, which has been requested many times and which is on our list of things we plan to add in future versions.

Yes Daniel, scrub playback is the idea.
Thank you so much

Don’t know if this has been asked or not, but being able to pick a custom background color for frames (text frames especially) would be great (unless I missed something for now it’s possible for the text to have BG color but not the whole text frame, which would allow more “appealing” layouts when doing methods/instructional stuff)

Size and position of frames should be editable by numeric settings in the Properties section of the lower panel.

yeah I know that, it’s just that it’s very tedious to do that for each frame versus a magnetic layout or being able to duplicate frames (like having a “duplicate” shortcut/right click for instance or just with cmd-C/cmd-v)

When you enter a note by pressing its letter name on the computer keyboard, I understand that by default Dorico puts it in the octave where it is closest to the previous note. I would suggest that this rule should be overridden if it would put the note outside the range of the instrument in question.
EDIT: maybe also if it would put the note higher than a note in a higher voice, or lower than a note in a lower voice? But I suppose it might not be clear whether one voice is “higher” than another, at any rate if there are more than two voices.