I have a big issue with Dorico for Ipad, which makes the app nearly useless for me. After a while of using Dorico, the app doesn’t start anymore. When I try to start it , the gray Dorico -sign appears and then a black screen. Dorico doesn’t work anymore. I have to reinstall it. But after a few days the same happens. In the meantime I have reinstalled the app four or five times. Dear Dorico team, this app, for which I paid a lot of money , is for me a pain and I can’t use it with this behaviour.

Just to clarify, have you:

Reinstalling the app is not normal, so something seems to be quite amiss here; this is not a common complaint at all.

Also, what generation and size is your device?

I know you are running into this problem, and that you’re still using iPadOS 14 on at least some of your devices. Although Dorico for iPad should run OK on iPadOS 13.4 or later, I would recommend running it on the latest version of iPadOS. Are you willing to try updating to iPadOS 16 on one of your iPads in order to see whether you find Dorico runs more reliably on that device?

I’m not willing to update to IOS 16, because I don’t like the graphic design of the homescreen. IMO it’s just ugly. And if I update to a newer IOS version, just to try, whether this issue is solved, it’s nearly impossible to get back to the older IOS version.

Romanos: Yes, I have tried,

what you recommend ( dismiss and restart) , but that didn’t help. 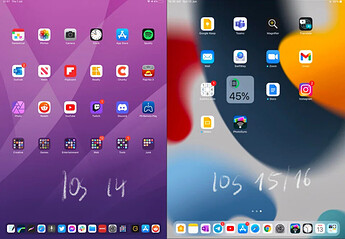 You know you can change the background to be whatever you like, right? That’s the goofiest reason I have ever heard to not update to a current OS.

It’s not the background wallpaper – it’s the density of icons in Launchpad. In iPadOS 14 Launchpad shows rows of six icons, but in iPadOS 15 and later it’s only four icons in the row. It’s not an uncommon complaint.

Yes, Daniel, you’re right. The four icons in a row destroys the design. There are a lot of people, who don’t like it. And you can’t change it.

Daniel, I know you’ve gotta be a patient guy to deal with all the stuff that arises here, but this is the most gracious response I’ve ever seen. If I were in your shoes, having to keep all the balls in the air with a worldwide audience watching and having to deal with the (to me) incomprehensible task of making something as complicated as Dorico work for every user on every platform with every conceivable combo of hardware/software, and I heard someone say ‘I’m not willing to update the OS because I don’t like 4 icons across the screen’? I think it would be one step over the line, and I’d have to be honest in my response.

mset: Im really upset about your comment. Dorico for Ipad is released for OS versions inclusive OS 14. And so it should work with this OS. And it’s absolutly my right to stick with the OS version, which I prefer. No one told me about these issues , before I bought Dorico for IPad for a lot of money. And it’s absolutely no guarantee , that with OS 15 or 16 these issues are gone.

I do believe that you would not experience the iCloud problems you have been experiencing with iOS 16, but I also appreciate that you don’t want to upgrade your iPad to run the more recent operating system. When the next major version of Dorico is released next year, it is quite likely that the minimum iOS version will increase, because we are moving to the next major version of the Qt framework upon which Dorico is built, and the operating systems supported by that version differ from the versions supported today. So sooner or later I’m afraid you will need to update your iPad to a newer version of the operating system if you want to continue using newer versions of Dorico.

Daniel, thanks for your hint. I think that I will update the OS, when Apple will open it’s graphic design of the homescreen for a free configuration like it is possible on Android tablets. Perhaps it will happen in the next future.
Another point is that I have observed a crash of Dorico on my IPad, which seems to be the same issue as described before.
I changed the name of a score, then I got a message of Dorico, whether the file should be renamed. I clicked “yes” and Dorico died immediately. That means I got the black screen and I had to reinstall Dorico. I think this crash can be reproduced. IMO Dorico doesn’t work correctly together with the IOS file system.

when Apple will open it’s graphic design of the homescreen for a free configuration like it is possible on Android tablets.

You shall be waiting a long time, I’m afraid.

@dspreadbury: Daniel, I just ran into a similar problem this morning. Dorico iPad was running just fine. I was changing a pitch here and there for a final edit, and playing it back. After about 15 minutes, it pressed P and it played back but I couldn’t stop it. I wait while it played and tried again. It would stop. I was forced to close the app, but it wouldn’t close for the longest time. Finally it did.

What I did:
I checked to see if I needed to update iPad, but it was 16 and up-to-date.
I went to TestFlight and opened it from there. It opened but then the screen went black.
I closed D and reopened it. Same problem. Screen went back.
I did a Reset on my iPad.
I opened Dorico and black screen. It is inaccessible now.

If you get into the situation where Dorico won’t reopen, then you have no option but to remove the app from your iPad and reinstall it. Before you do that, go to the Files app and look inside On my iPad and then the Dorico folder inside there. Make sure you move any files you want to keep to a different location. Once you’ve done that, you can delete Dorico in the usual way: long-press its icon in Launchpad, and choose Remove App. Then you can simply reinstall Dorico from the App Store.

I do think. You have fundemental file or corruption issues. I have ipad 16.2 and after two days of composing i get message cant open file. Composition is now lost. The file has a name but its nowhere to be found other than the. Recent files list. Im always saving under new names to avoid this but forgot thhis time.

Wecome to the forum, @jpanagia. I’m sorry to hear that you’ve had this problem. If you run the Files app on your iPad, do you see a Dorico folder inside iCloud Drive, and see your projects located within?

Same with files app. I have searched globally for file by name annd cant find it. Its hardto tell where Dorico is i storing files. There is a Dorico folder in icloud drive but does not contain any of the error filles.

Do you have a Mac or another computer with access to your iCloud account? If so, can you see the Dorico folder inside the iCloud Drive folder on your Mac? Are your projects shown in there?

Yes i checked icloud from browser and icloud app on windows PC and filles are not there. I am willing to uninstall reinstall and give it another try if you think that makes sense.