During playback, the playhead sometimes advances only once per quarter note

I have complained before that in Dorico 4, the playhead usually advances only once per eighth note, whereas in Dorico 3.5, it advances twice per eighth note. If a pickup measure is inserted after the beginning of a flow in Dorico 4, the playhead may start advancing only once per quarter note, which looks strange in a compound meter like 6/8. Here is a Dorico project which illustrates the problem:

I had a quick look and the problem doesn’t seem to be caused by the pickup measure itself, but by the bar just before it. It looks like you’ve used a hidden 5:6 tuplet to try to get a different duration in the measure to make room for the following pickup. When I delete the tuplet signpost and then select the eighth rest that appears and shift-B -1e to shorten that bar by an eighth duration, then the bar appears the same as you had it originally, but now the playhead advances normally after that point. Also, this way the bar numbers are correct too (previously, the hidden tuplet bar before the pickup and the pickup bar were incorrectly counted separately).

If you watch any of my videos of my virtual choir singing a hymn, you will notice that I insert a brief pause between verses. That is why the demo project in the first post has a hidden tuplet and an extra beat in the measure before the pickup bar.

Regardless of why you do it, this does appear to be the reason it is happening. The 5:6 hidden tuplet seems to cause the playhead to only start advancing by a quarter beat each time instead of subdivisions after that point.

If you delete the hidden tuplet in my demo project and then play it, the problem with the playhead advancing only once per quarter note remains. The problem is caused by having an extra beat in the measure before the pickup bar.

If you want a brief pause between verses, what about adding a brief hidden tempo change in the silence at the end of that bar, rather than making it too long? 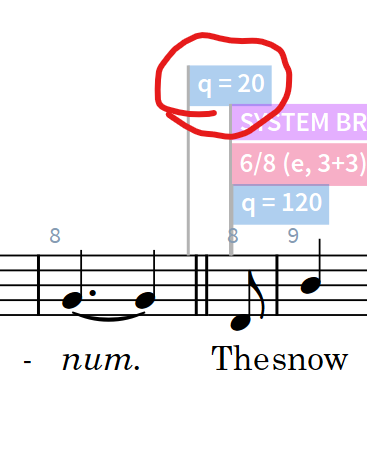 It has the same aural effect, but without having to lengthen the measure and use hidden tuplets.

The reason I prefer not to add pauses with tempo changes can be found in this post.

I have just discovered that the problem with the demo project can be solved by adding a time signature of 7/8 to the measure before the pickup bar.