Observe the bass voice in red. Setting ‘ends voice immediately’ on the crotchet D still leaves all the full bar rests, which I then have to remove manually. Why is this? I confess I do not fully understand how this works.

Is it just in this voice that it occurs? What happens if you swap voice contents?

Without examining your project it’s hard to determine what’s going on. For me, just copying your example and choosing ‘end voice’ for the red voice in your example gives the expected results without the extraneous measure rest (in your bar 60).

Ah - it’s something to do with the option somewhere about hiding/showing full bar rests I now recall.

or me, just copying your example

That’s Fuga VIII in D sharp minor from JSB WTC I, by the way (my example does not show the key sig., not that it’s relevant to the question!)

Except that this is not working in my score. I wonder why?

Do you want to attach?

Will continue to puzzle it out.

Is Starts voice enabled on the first bar rest?

Long story short: the red voice is the primary voice and the notation option hides rests in additional voices.

Here’s a primer on how these work: Unasked for flipping of notes - #23 by pianoleo

Thanks Leo for this very clear article. I had the feeling that changing the upstem voice as downstem voice by default would settle things but it wasn’t clear as to why. Your 3rd point makes it very clear.

@pianoleo I’ll have a good read of that.

Amusingly, this is Bach and I do not regard any of the voices as being ‘primary’ and neither did he, I’d say. In fact, in WTC and other works he goes to a lot of trouble to make the voices equal participants in the dialogue. But I suppose the engraving program needs such a notion, even if it is musically not quite right, as such. Not that there has to be any direct mapping. And also amusingly, if there was going to be a primary voice in the LH it would be the down pointing lower voice, the bass from which everything is built up from, and even then, in WTC, that’s not really the case.

But with the help of your article I will be on the way to working with this. Thanks.

Remove Rest takes care of this so easily. Alternatively, there’s nothing wrong with writing LH in the red voice starting in bar 59 where the middle voice of the fugue moves to RH. “Voices” in Dorico are not the same function as musical voices. It’s just a method for fitting notes on a staff.

"Voices” in Dorico are not the same function as musical voices. It’s just a method for fitting notes on a staff.

Yes, I have figured that much out now!

@pianoleo Can I refine that more? It seems that the first up stem voice used on a staff is the primary voice. 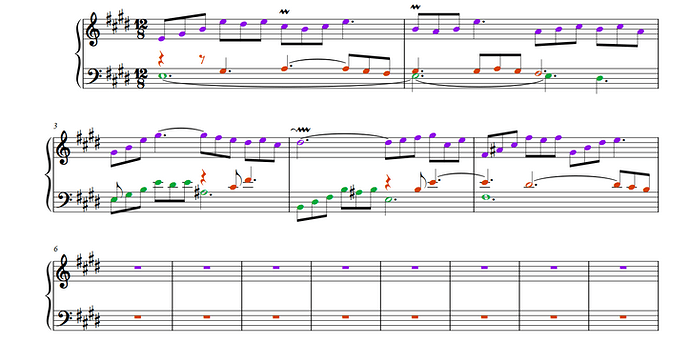 Here the first voice I entered is the green bass down stem lower voice. Later added the bass upper voice. Yet the bars re filled with the red rests. So the actual order of entry can’t be important, but the up or down stemness is.

i have no objection to whatever colour or voice the bar rests get set to because as you engrave they all disappear as you fill bars. But it was the stopping and starting of voices that had me puzzled.

And re point2, it pads to the end, not to the last bar of the final entry. Doesn’t it?

As a possible FR, an option to specify what the primary voice is? Would that make any sense?

I’m still not getting the point here. Today, I have this. The quaver G’s take over the full bar rests, and when I add more ‘primary voice’ (blue) the red full bar rests still appear and have to be removed bar by bar by hand. I simply don’t get it. The second quaver G is marked ‘ends voice immediately’.

Worse, when I delete those G quavers, the only instance of that voice, and close and restart Dorico to purge unused voices. the red full bar rests from that voice persist. This cannot be right… What would I have messed up?

What happens if you continue adding Up-stem Voice 1 in ms. 12? Do the red rests disappear? Or get replaced with blue rests?

They stay red. You can see why I am perplexed and disturbed.