Here’s a strange one. I have a project set up for lead sheets with parts for all the normal instrument keys & clefs (concert, Bb, Eb, F etc). I noticed that my French horn and Viola parts were sometimes printing different from the others. The music was fine, but all the header fields (title, layout name, and composer) were printing italic, whereas the master page is not italic for those fields.

All the layouts appear correct when viewed in PRINT mode, and some of the layouts export correctly.

The attached ZIP has a project pared down to 7 measures and 4 instruments. These are all exporting incorrectly (i.e. with italics). The score prints without italics, but that’s a different master page, of course.

Very weird. The Master Pages for the Parts seem to show all the tokens in an Italic “slant”, though obviously Petaluma has no Italic, and Italic doesn’t seem to be set on any of the relevant Paragraph Styles. However, you do get a lot of font warnings on loading about Petaluma Italic being missing, but changing them all to Regular doesn’t fix anything.

The Master Pages for the Parts seem to show all the tokens in an Italic “slant”,

I missed that. It looks to me like the token names are normal, not italic, but the braces are slanted.

That may be the root cause. But that doesn’t explain why the behavior would be inconsistent. In my original project, I had 7 parts layouts, all using the same master pages. 4 always printed normal and 3 always printed italic.

I opened up my original project. The master pages have the styles for all the tokens as “Regular” (not italic), and they do not appear slanted as in your screen shot.

Where do you see the font warnings? I don’t see any of those.

From what I can tell, the current version of Petaluma doesn’t actually contain characters for { and } at all, so it must be subsituting them in from somewhere else. I wondered if perhaps deleting the last bar was the key, because with the final bar there’s a system break, meaning you get a bar number (which is italic), wherease without the final bar everything fits on one system, meaning there isn’t anything on the page that’s supposed to be italic. Sadly I can’t actually replicate the problem on this machine at all - all four part layouts and the score layout export to PDF just fine (with regular font styles for everything apart from the italicised bar number on the second system). If I have a moment later I’ll load up the Windows machine and try there…

Aren’t bar numbers italic by definition in Paragraph Styles. They appear to be in non-Petaluma scores, since I continually find myself going into Engrave Mode to change them.

(You’d think I’d change them by default after all this time, wouldn’t you?)

Yes, and this is the whole point - Petaluma doesn’t have an Italic style, so Dorico has to skew the glyphs from the Regular style in order to make them look italic. This doesn’t play nicely with PDF export, which is why Dorico now has a “Missing Fonts” dialog. I’m not sure that anyone’s been able to pin down why sometimes Dorico seems to be able to generate problem-free PDFs that contain non-existent font glyphs, and why it sometimes gets it wrong.

Well, I used Petaluma because it seemed to be a default with Dorico. Can anybody recommend a similar font that would work better? This is for lead sheets, so I’d like to use a font that looks more of less hand written but is easy to read.

Petaluma should be fine, of course, but I would recommend you go through the Font Styles and Paragraph Styles dialogs to make sure that none of the font and paragraph styles are set to use bold, italic or bold italic weights for the font, since none of them exist for real. I recently made some changes such that using Petaluma as the default font (as set in Preferences) will prevent font and paragraph styles from using unavailable styles, but I haven’t yet had a chance to extend this to the Engrave > Music Fonts dialog, though I plan to do so.

A font warning message or dialog or command or something is mentioned above. What is that? I am not seeing any warnings (or font information of any kind.) Where would I look for this? I can’t find any reference to it.

This dialog appears when I open your file: 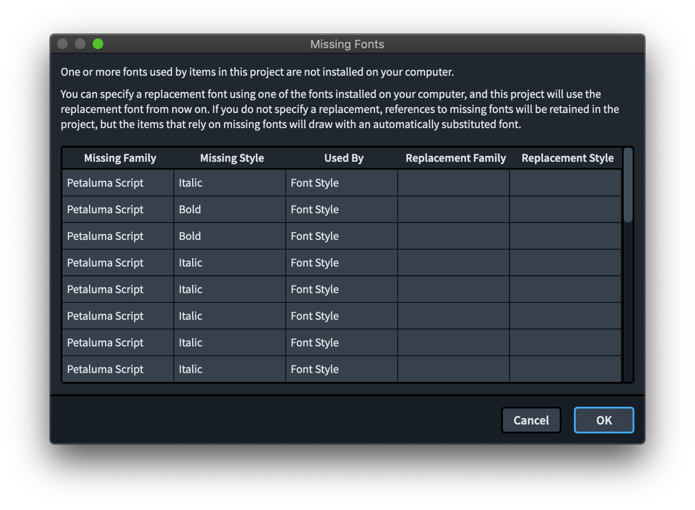 Have you unticked this option? 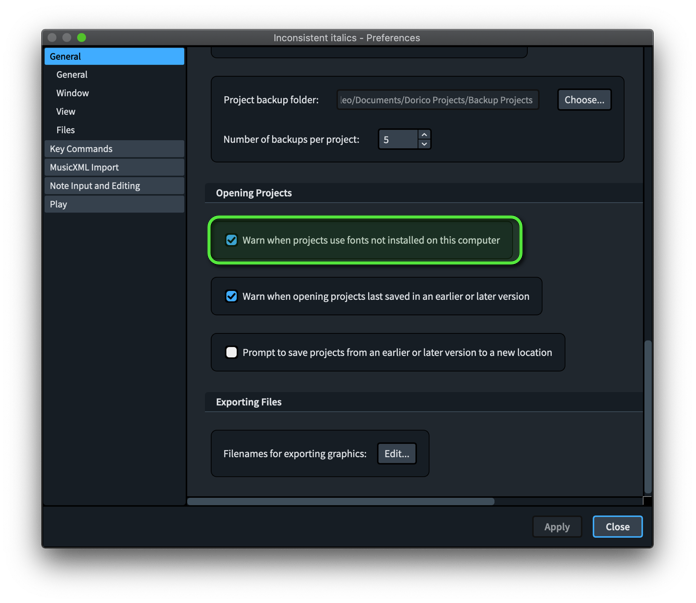 Petaluma should be fine, of course, but I would recommend you go through the Font Styles and Paragraph Styles dialogs to make sure that none of the font and paragraph styles are set to use bold, italic or bold italic weights for the font, since none of them exist for real. I recently made some changes such that using Petaluma as the default font (as set in Preferences) will prevent font and paragraph styles from using unavailable styles, but I haven’t yet had a chance to extend this to the Engrave > Music Fonts dialog, though I plan to do so.

Under the Edit Font Styles, the only item that included the work “text” in the name having italic was “Dynamic Text Font”. I set tat to regular but it didn’t change the results.

I set the music font to Bravura and this did display all the title fields as regular.

The only paragraph styles set to italic were Bar Numbers (parts) and Bar Numbers (Score). I set these to regular and the problem went away. This is consistent with Leo’s hunch above about the problem being triggered by the italics in the second line.

I would point out, however, that I started down this path when I observed for one projects, some of my parts layouts had regular headers and some had headers in italics. They ALL had at least 4 systems of music. Nonetheless, there does seem to be some issue where the style of the header fields is corrupted by the style of other text elements.

Have you unticked this option?

The plot thickens. I have never seen the missing font dialog. But my “Warn when projects use fonts …” option is checked, exactly as in your screen shot.


And just to be clear, when I use the Dorico PRINT mode to send directly to my printer, it comes out as expected (no italics). But when I use that same page to send to PDF, the PDF shows the headers in italics. So it seems to be specific to writing PDFs. In my workflow, I never send to the printer directly. I make PDFs of everything.

On Windows, Dorico can’t warn you about missing italic, bold or bold italic styles for Petaluma because Windows itself synthesises them for you, so when we’re enumerating the fonts, those styles actually appear. As it happens with Petaluma specifically we know those styles don’t really exist, but in general of course we don’t know which styles are real and which are synthesised silently by Windows. macOS works differently: it only shows you the actual styles that are on the system. So that explains why Mac users will see the missing fonts warning and Windows users won’t.

I have never seen the missing font dialog.

It certainly appears when a font is completely missing. For example Avenir is bundled with MacOS (and Dorico users seem to like using it) but not with Windows.