This is my first attempt at an expression map for the VSL Synchron Solo Strings Full Library (Violin 1, Viola, Cello 1 only). I’ve always wanted to access all of the articulations in this extensive instrument but found it difficult in Cubase with dozens of articulations and variants. I prefer working with notation rather than a sequencer and I’ve long felt that a scoring program would work well for quick mockups by placing glyphs rather than scrolling through expression lanes and drawing controllers. With Dorico’s 3.5 update I’ve been able to get much closer.

Let me say first that one of my goals is to make Dorico conform to the instruments and not the other way around. I’ve added extensive custom playback techniques so I can access everything from the dynamics swells to the scale runs. A problem I have right now is that saving an instrument as as endpoint doesn’t bring back in all the custom playback techniques. So for now if you want to use this then the easiest way is to open it from a Dorico session. It also requires custom presests for the Synchron player which need to be added to you user folder.

To easily give more variety to the performance I have used the new condition rules. The natural is setup with staccato, short and long detaches, and for long notes the sustain with 6 vibrato variations. The legato uses the leg. bow change fast for short notes, leg. bow change slow for med notes, and for long notes the unlooped legato with 3 vibrato variations.

Since there is little control over the placement of the playback techniques I have organized them in other groups. So most of them are in the common folder. Then harmonics/ponticello/tasto in Wind. Glissando/Sul/grace notes in Brass. Scale runs in Unpitched percussion, and attack times-dynamics in Pitched percussion. I’ve know its confusing but I’m open to suggestions on how to organize something like this within the current version.

There is a PDF which hopefully explains how I’ve approached this expression maps. Dynamics are biggest struggle. The controller values don’t seem to be consistent between markings, i.e. mp and mf have a big jump were as mf and f have almost no change. So usually I put in dynamics that work for what I hear and not how a live player would play it.

Hoping the next version of Dorico will continue on this path and add more conditions and a way to organize custom playback techniques.

There is a link to a mockup I made of the first movement of Ravel’s string quartet in F. It is done with all playback techniques and no drawn controller information, however there is extensive use of the tempo track.

This is a work in progress and I hope it can be made much easier to use in the future. 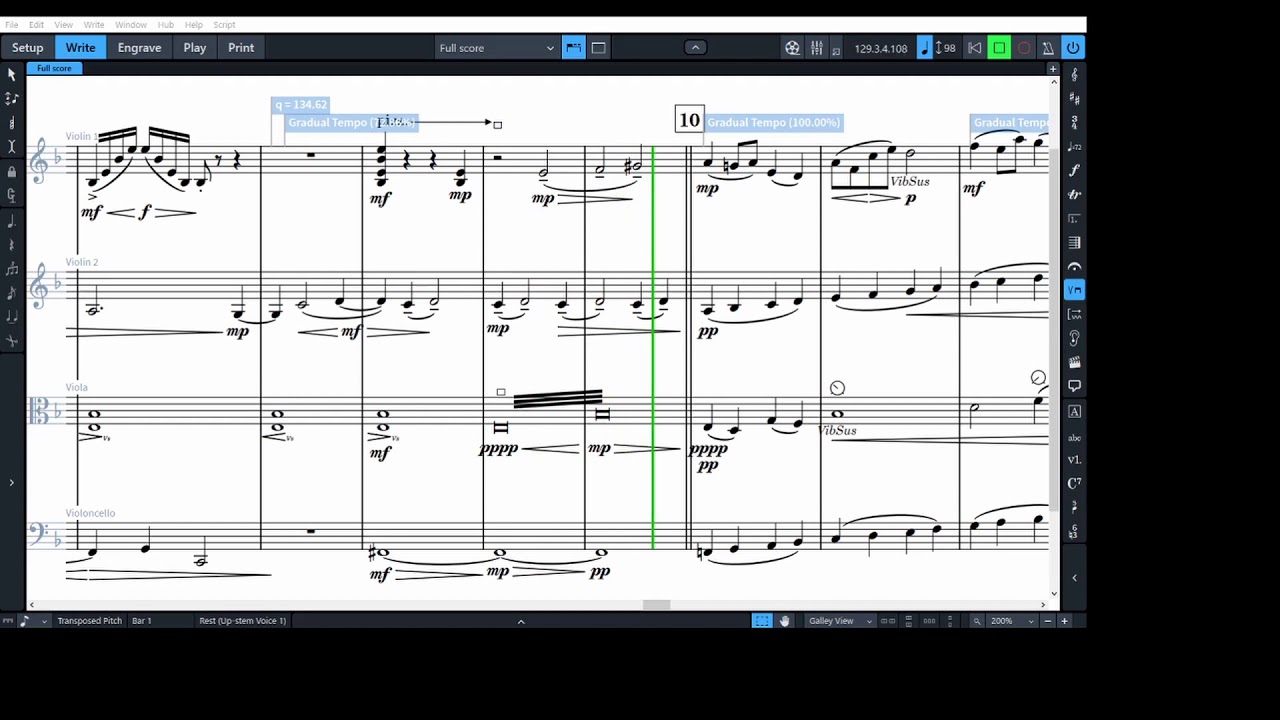 The way every long note has a built-in crescendo at the start soon gets irritating to listen to.

I assume you mean the Synchronized solo strings with the two new instruments here? I’m interested in what you’ve come up with as I’ve done expression maps for all the instruments and am currently writing a string quintet including violin and cello 2. Looks like we’re along the same lines with the standard note lengths except I prefer to include spiccato and specify staccato with the dots. Incorporating various vibrato into the scheme is not something I’d considered yet.

I’ll have a look in couple of days when I’m back at my PC and let you know my thoughts then.

I had a listen to the Ravel mockup and the blank score with EM’s. Is it not possible to actually see the Ravel project itself? I’d then be in a much better position to judge just how different my results would be. I agree entirely with your first point that Dorico should conform to the instruments but wonder if the map needs to be quite this detailed using the full rather than the basic templates as I have done (though modified to pick out a few extras from the full set where I thought it might be worthwhile). On that decision we’ve taken rather different paths. Also you seem to duplicating Vel XF to Expression. I thought this would be a good idea but found it gave difficult to handle dynamics so stuck to VelXF only. It’s easy to adjust the dynamic levels in the dynamic automation lane but no approach is foolproof. The synchron player, despite better general dynamic accuracy than VI, has restricted dynamic range at times – something which has been brought up on the VSL forums. The piece isn’t perhaps an ideal demo for NoteLength control as so much of legato mixed with sost transitions or on the other hand spiccato but not much I could hear in between. Of course seeing what’s been done in the score could mean that this initial impression is not fully correct.

One thing I would certainly do is to use the 2nd violin as it hugely increases the expressive range. I know it’s missing rows of articulations but you can just copy them from vln 1 if you really need them.

I don’t understand your references to other non-string instruments.

Thank you for the expression map.
Portamento has not the sound of a portamento, only two notes played without any link.
An idea to play a real portamento ?

Portamenti work fine but you must do a “playback start offset” for the note where the port starts. I use around -5 which works reliably. Very occasionally, you may also need to slightly reduce the length of the previous note as well but I can only think of one example in a 40 minute work with dozens of the things.

It goes without saying that you must disable playback for the notated portamento as well, otherwise the VSL library one cannot kick in.

Thank you very much. It works fine now.

glad to hear it!

When I download this file I get a .rar file, but my rar extractor tells me “DORICO EM V1.rar is not RAR archive
No files to extract”
Is there a working copy of this map available? Thank you!!

Apologies - I think it was my UnRar prog. Got it now!