Well though Daniel Spreadbury (Dorico lead developer) did not promise anything, he DID say that they were very well aware of the need for offsets per articulation.
As the thread states, though Epxression maps are great in concept and are absolutely necessary for modern composers, the implementation is overcomplex messy and counterintuitive. Its now been 11 YEARS without a single update STEINBERG! How about a midi update JUST for expression maps - we have been patient enough!

Please upgrade Expression Maps. I don’t say update, because Expression Maps need a facelift across the board. Better Expression Map management, better GUI, individual offsets per articulation, maybe 3rd party support for developers to be able to be added automatically like VSL does with Studio One, just general making the whole process easier and intuitive across the board. Steinberg were creative in inventing expression maps first and now it is time to take the lead again with the concept.

Remember everyone to hit the Vote button at the top of this thread. That’s what will help the most to bring Steinberg’s attention to this.

Voted! Personally, it would be a workflow game-changer (and I don’t say that lightly) to be able to set a delay offset per articulation, similar to what Digital Performer introduced in DP11: 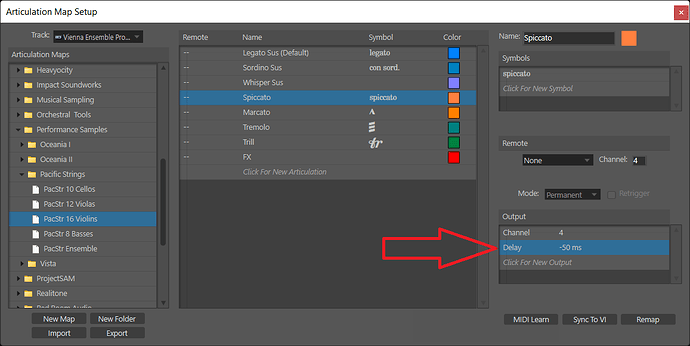 Please allow to access multiple maps at once. I have art conductor by Babylonwaves but don’t use it as it is a pain importing them one at a time.

So agreed. It wouldn’t say game changer lightly as well but it suits here perfectly.

Can’t wait to see that implemented.

Absolutely. It’s the least they could do. Wondering what the problem is!

Is that delay in DP11 for the Spiccato only? And you can choose another delay for the other articulations? I am seriously thinking about switching to another DAW after 15 years. Whoever is able to make composing orchestral music more fun!

Steinberg please give us these features. At least delay per articulation and basic gui improvement.

It’s really important you hear us on expressions maps. Anything else and its obvious there are internal management issues. It’s sorely needed and you cant prioritise this, you dont think it should be next? You are underestimating how many composers need it.

Funny. I was just testing the “track preset” function and realized, that a track preset (unlike archival tracks) saves and LOADS the assigned expression map.
So I opened my template, saved all Midi Tracks to a track preset, created a new project, loaded the preset and deleted all tracks again. Voilà, all Expression Maps are there (“bulk imported” into an empty project so to speak) .
Didn’t know that…

Yes, you can set a custom delay value for each individual articulation in DP11.

I believe this will come to Cubase eventually (it has to, otherwise the composer community will riot haha). I truly hope Steinberg is listening and this gets implemented sooner than later, it’s been many years already. Fingers crossed.