Is it possible to add a fade that extends beyond the original end boundary of an audio clip?

For example, in the screenshot below. The audio clip ends at the point shown, but I want to create a fade out that extends to where the black line is. Is that possible? I’m using Cubase Pro 11. 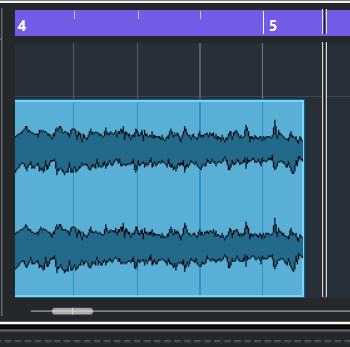 This is how I would do it:

How would I go about doing #1? I’m still prety new to this. I found this video showing fading with automation but am not sure how they got there and it was on an older version.

Automation is a pretty basic feature and I highly doubt it has changed much between versions.

Okay, that helps some more. But I still cannot get the fade to extend beyond the end of the audio clip. Any further tips?

I didnt get it. How can you fade beyond an audio clip when there is no audio there?

I was wondering if you could create a fade using the audio that exists at the end of the clip, to go a bit beyond the end of the clip. Basically, if the clip ends with one note still playing, is it possible to have that note continue to fade out beyond where the clip originally ended?

If I understand you correctly, you want to take a note that exists at the end of an audio event and make that note sustain.

Some workarounds:
You could either copy that last note as a separate audio clip, time stretch it and see if it okay.

Otherwise you could set up a nice delay / reverb and automate it such that you get close to what you want.

But to do what you want to do, you need to have recorded the tail of the last note. An audio event shows you whatever’s recorded. So if something’s not recorded, you computer can’t play it.