I’m working on some expression maps for infinite brass and wanted to compare my efforts to something I played in live. It’s a short excerpt from “Quiet City” where the trumpet and english horn play together. Measures 1-9 employ the expression maps while 11-19 are recorded. The english horn was fine in the sense it captured the notes and a couple CC controllers I was riding. The trumpet however only captured the notes I played and drew in something for CC1 even though I was riding some faders for CC1 and CC21 the entire time.

I’m really not sure what’s going on here. Can someone help me?

I’m not sure why this wouldn’t be working for you. I just tried it in your project, waggling the volume controller on my MIDI keyboard during MIDI recording (my keyboard is tiny and only has the one rotary control), and the data was recorded exactly as I would expect.

What if you try only recording your MIDI CC data during MIDI recording?

I probably should have mentioned that I already tried ‘overdubbing’ CC data only and nothing. I can also verify that the slot in the Kontakt is responding, it’s just not getting recorded to Dorico for some reason.

I have a mod wheel on my midi keyboard as well as a nanokontrol. Both elicit response from the plugin and all sounds right, but the only the grey line shows up in the CC1 lane as if the expression map overrides the recording.

Do you by any chance have Filter out MIDI controllers activated on the Play page of Preferences? 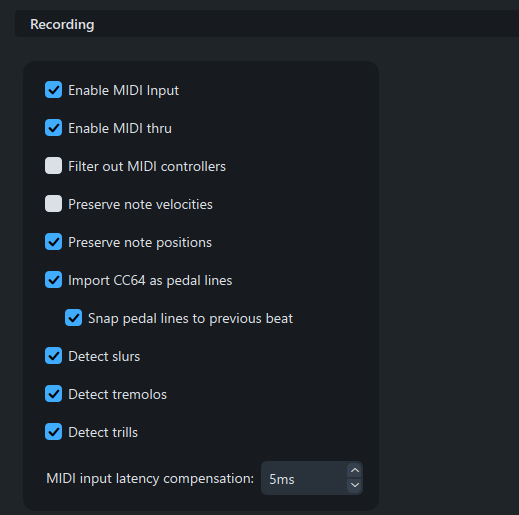 When you wiggle your rotary control, do you see the little green MIDI activity indicator in the bottom right-hand corner of the project window flashing?

I’ll have to check that later and tbh have never noticed that. I’m away from my computer for a while but will test when I get home.

Ok I just tried recording again and I do see a blinking green light whenever I move the slider/mod wheel. And just to satisfy my only theory, I changed the expression map to default just in case I’d run into a bug where the expression map was overriding the recorded data, unlikely as that would be.

I’m really at a loss here. My next step is to start a new file and try again in case this one got corrupted for some reason.

You’re certain that your keyboard is correctly configured to send the CC data you expect? Many keyboards allow you to adjust which CC is sent by each controller, so is it possible that it’s actually sending data on a different controller? If you open the MIDI CC editor in the Key Editor and open the menu to choose which controller is shown, any controller that already has data will be listed automatically in the top level of that menu.

Yes it is set up correctly because it’s working for the english horn line: 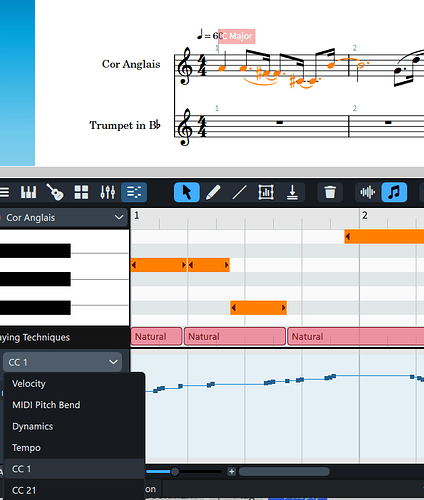 And I can see the trumpet slot responding to fader movements as well, however here’s a similar screenshot for the trumpet: 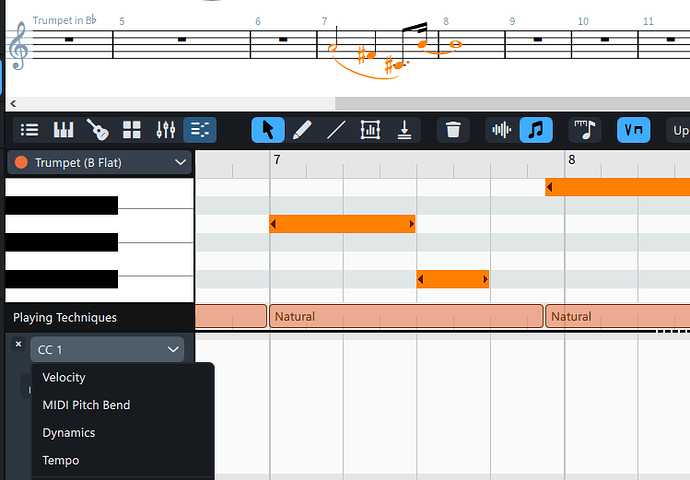 I’m actually wondering if this is a VST3/Kontakt7 problem rather than specifically a Dorico problem though I don’t know how the data flow works in this case.

The MIDI CC data will be received by Dorico and recorded there before it gets passed to the plug-in, so there’s really no reason why it shouldn’t work. Perhaps the issue is that the CC data can only be transmitted on a single channel, so it’s being recorded only on the instrument that is assigned to channel 1?

I thought of that and just now tried putting the trumpet on it’s own Kontakt instance and still no bueno. This is also with a brand new file. I even tried a spitfire plugin for the trumpet to take Kontakt and the specific library out of the equation.

I started a new file from the brass trio template, loaded up Kontakt 7 and just like this file it will only record CC data on the top staff (channel 1). It records midi notes but no CC data regardless of whether I’m using the mod wheel on the keyboard the notes are recorded from or the nanokontrol.

I’ve tried it here myself with my little M-Audio Keystation mini 32, and I’m able to record CC7 (the only CC value I can record with it) as expected for each instrument.

I don’t know why it would make a difference, but can you try creating a new project from e.g. the brass quintet template, and use the HSSE+HSO (Pro) default playback template, and see whether that behaves any differently?

In that scenario it only records notes and no CC data on any staff.

Perhaps we should get a look at the MIDI data that Dorico’s actually recording, then. Please follow the steps here:

The way MIDI recording works in Dorico is that Dorico buffers everything you play, then it saves the MIDI data to a file in a temporary location, and then it imports that MIDI file at the appropriate position in the project. So I think the next step would be to get a look at the MIDI file that Dorico is capturing. Please run the Terminal app on your Mac, and at the command prompt type: open $TMPDIR This should open a new Finder window onto a folder called T. In here you should find a folder c…

Here’s a zipped file of the contents of that directory.
midi_captures.zip (33.5 KB)

Well, the MIDI files contain the expected CC data. For example, I imported capture 0051.mid into Dorico, and the CC 1 editor shows your played values in the Key Editor.

I’m really at a loss for the time being. Without being able to reproduce this myself, I’m not sure how else to assist at the moment.

That’s fair and I appreciate you digging in to help narrow down the problem. So seems to have something to do with the temp file getting written to Dorico then?

No, I don’t believe so, because recording CC data works for me, and it works for you for the first instrument, and the MIDI files you’re recording include the CC data as well. This is why I’m at a loss.

Got it. Also just for thoroughness I did reboot along the way and I even reinstalled Dorico from the download helper but the result is the same.