Currently Dorico sets the limit for fanned beams up to 32nds (this follows the examples shown in Gould, p.158) however the literature contains several examples where fanned beams go beyond this limit. (For instance in pieces that go up to 64ths and 128ths if one needs a fanned beam to display accel. or rit. It wouldn’t be coherent for the latter to be limited to 32nds).

The example below is from Crumb’s black angels which displays a fanned beam of 64ths in the 1st violin, the 64ths in the 2nd violin below explains this choice. 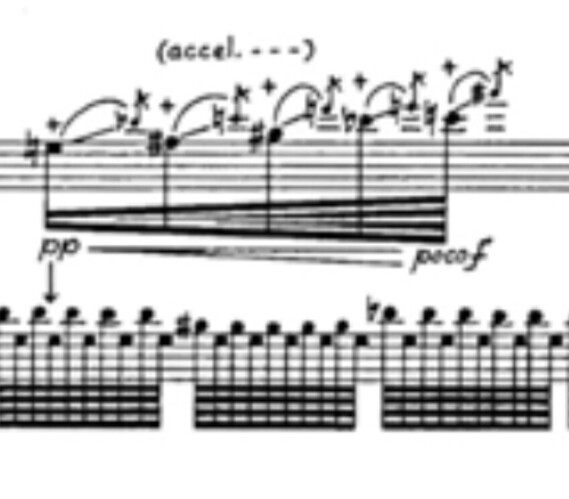 Dear Santa,
if you are bringing some additions to the fanned beams, I would love to have some kind of a system that positions the notes automatically accelerating/rallentando. Tweaking them every time is irritating (adding imaginary smaller values, moving them in the Note Spacing). Also, a playback would be amazing!

Just a spontaneous idea/dream/fantasy: The first note is 64nth, it is followed by eight notes (let’s say 32th) and one 16th note. You click “Create Fanned Beam”. Out comes a fan that begins as 64th (four beams) and ends as a 16th (two beams), it has altogether ten notes, the first and last one have their original durations, notes between have durations that go linearly from one to another (these values would probably get rather groovy, so they will need to be simplified, of course). The duration of the whole fan would be the duration of the original notes. These note values are then used for positing the notes and more importantly for playback.

I wouldn’t use them in any naughty ways, promise!
Also, a pony.

Hey I like it.
Why not make it easier: insert a half note. Properties > activate fanned beams, set amount of notes (10?) and start and end beam amount and Dorico fills it automatically?
With two quarter notes, Dorico could fill the Interval between the pitches.
Ok, I realize, this is getting quite hard the more pitches one wants, but if the number of notes selected and the number of specified notes match, (for example 10 specifically chosen 16th notes selected before incoming the mechanism) no additional notes would be added…
Playback would then be maybe easier to accomplish, as Dorico is replacing the notes with its own „fanned beams“ object, which can have an internal algorithm for placing notes getting faster or slower?
Don’t take anything here too serious, though just thinking out loud here…

I’m also working on a score and I would need a rallentando fanned beam that finishes in 16ths instead of 8ths.
I think is still not possible in an automatic way, am I right?
If is is not I’m going to do this with some lines and engraving manual adjustment.

You’re right: at the moment, the fanned beam always ends with a single beam.