"Fatal Error" cropped up. First time for no apparent reason

Can anyone help me decipher this message please. I saved a reaper notation view as an .xml as usual, having gone through it with a fine-tooth-comb to tidy it up.

The last bit refers to where the file is kept.
First time this has happened.
How can I save the xml file to retrieve it?
Thanks for any help you can give. A lockdown weekend’s work
might be saved.

Edit: It seems to open other .xml files in roughly the same location.
Plus, this particular reaper file plays ok.

When does the error occur? Is it when you try to import this file into Dorico? Then, apparently, Reaper creates ‘malformed’ XML, or at least produces something Dorico doesn’t swallow. There are tools to examine and verify XML files, but you can open XML files (and edit them if you dare) in any text editor.
As always, hard to tell without seeing the file… can you post it here?

Happens immediately I click on the file name after “open other” in Dorico.
This was the second, tidied up file. The original one opens up but Dorico can’t parse it beyond bar 12, following up with the remaining bars of the piece empty (not even rests) - hence tidying it up.
I’ve had problems with misinterpretation before and had to load partial bits of the project as new flows - but this one doesn’t even try!

Thank you for responding and for anything you can suggest. 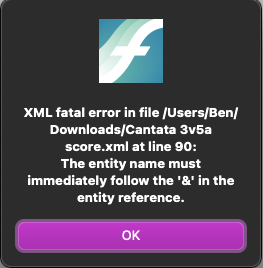 Many thanks indeed. I’ll stick with that convention then. No & signs anywhere near an .xml.
Saved the day.

Ampersands are used in XML to encode (or escape) special characters that have special meaning in the XML syntax. Reaper should have encoded the ampersands as &amp; or &#x26; (‘entities’ in XML lingo) when creating the XML.
Some text editors like BBEdit etc. have commands to check XML syntax, but I found you can (on Mac/Unix at least, I guess it exists on Windows as well) also use a terminal command: xmllint followed by the path of the file (which you can simply drag into the terminal window). When I used this on your faulty Cantata file, it pointed me perfectly to the offending lines with Horns 1&3 and Horns 2&4. When I replaced the & with &amp; in the XML (note the semicolon), no error was reported anymore.

(And because the forum interface is built in HTML, which is a form of XML, I could not simply type &amp; , which was automatically displayed as a simple &, but I had to type &amp;amp; here