As the picture below (german language) shows there are currently several different folders containing user related presets. I.m.o. it would be very handy if upcoming Cubase versions store user presets just in the already used two “Documents” folders for everything “User\Documents\Steinberg” and “User\Documents\VST3Presets”.

This would make backups of all user presets much easier.

Currently I can easily backup the complete folders “Documents/Steinberg” and “Documents/VST3 Presets”. But if I want to backup my track presets I have to consider “AppData.….…\Track Presets” and Project Templates are stored in a version related folder under "AppData\Roaming\Steinberg\Cubase 12_64" which not only contains user Templates but much other factory presets things. So I have to specifically select the “Project Templates” folder for backup. Also the documents/Steinberg/ folder should contain by sound ratings (the 1 to 5 stars), so they are backed-up as well.

Of course this is not something that is high priority thing for me, but I’d really like to have some consolidation of user data (if possible) in the future 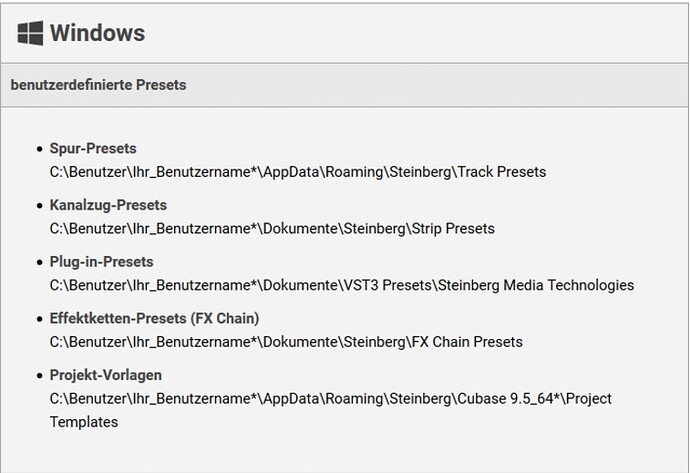