id Like to see the split screen feature to allow me to have Cubasis on one side and my lyric sheet or notes on the other side of my iPad Pro screen, I use lyric cheat sheets, but it’s tough if I need to see and manipulate my cubasis app while still having the lyrics up. Many of apples apps allow this split, and some third part apps, such as iReal Pro, also support it, please consider this feature that n yiur next upgrade.

I don’t see much need for additional instruments and effects, that’s what AU is for (although maybe Steinberg should start releasing some of their own AU plugins). I think the focus should be on the core DAW and it’s MIDI and audio features.

Cubasis has been my main DAW for ~12 months now. Loving it, but…

The file management is painful!
Can we please get proper Files app support?

I just thought of another one that is increasing in priority as my app collection gets bigger, sorting instruments and effects into folders. Scrolling through a list organized by developer is not useful when I am looking for my 2 or 3 delay apps. Scrolling through all my synths to find my drum apps is equally painful.

Cut Audio (Wishlist) - in addition to the current feature where you can set in and out points to an audio clip and hit “trim”, I’d love to be able to “slice” at a single cut point so the result is nothing gone, just two new audio clips i can then move around etc.

Without this, the current workflow is a lot of work duplicating a track and using trim.

Hi all!
For sure Cubasis is the greatest daw on IOS.
But it would be great to improve internal instruments :
-Minisampler really need a filter with enveloppes and an LFO
-Classicsmachines need individual instruments pitch .

Not sure if this thread is still looked at, but if so:

I often accidentally move a track when trying to trim it or when trying to use the fade-in/fade-out handles at the start or end of the track. Please adjust the hit points/hit region for ‘track move’ such that they start a little further from the edge. Hope that’s clear!

There’s no free Apple file aystem support for Linux. Using the Apple file system is no option for me, since I need to share files between a DAW running on a Linux machine and Cubasis.

Btw. I still need to test, if connecting an USB drive directly to the iPad Pro or to my WLAN Router works. I suspect the first won’t, but there’s a little chance that Wi-Fi via the router might do the job.

At the moment I’m testing a Cubasis competitor on my iPad Pro that provides a lot of features Cubasis is missing. Maybe I’ll report back at gearslutz.

Cubasis is great, and I spend many hours recording audio music tracks. I record audio tracks and frequently accidentally move audio events when in the project view. In other words, I accidentally touch recorded audio events and accidentally move the event laterally, thereby moving it in time, or I accidentally move it vertically to another track. Sometimes I do not notice the accidental movement of events until a later time when it is very difficult to restore the event to where it should be. Therefore, it would be very helpful if you could add a button in the project view to lock the location of all of the events. In other words, one button that would lock the movement all of the events in the entire project, to prevent accidental movement of events. This would give me a lot more confidence to use Cubasis for professional projects. Thank you.

It would be very useful to be able to easily export mono stems of all tracks with no effects. Presently in Cubasis I can only produce a stereo file of each track by using the mixdown feature and choosing create separate files for tracks. Thank you.

Now that We have Atom Piano for piano roll scale and Ghost notes, Steinberg can focus on Internal audio and midi routing and Side chain pleaseeeeee

Hi there guys,hope you are all doing well.dont know if this has been requested yet.
Would be nice if there was a magnifying glass

icon next to the track name, in the inspector menu to zoom out single tracks in addition to the current zooming option.this would make it easy when the project has many tracks and you want to edit the start and end points of an event, the volume, stretching audio and what ever new features might be added on in the future .
Something similar to the attached photo. 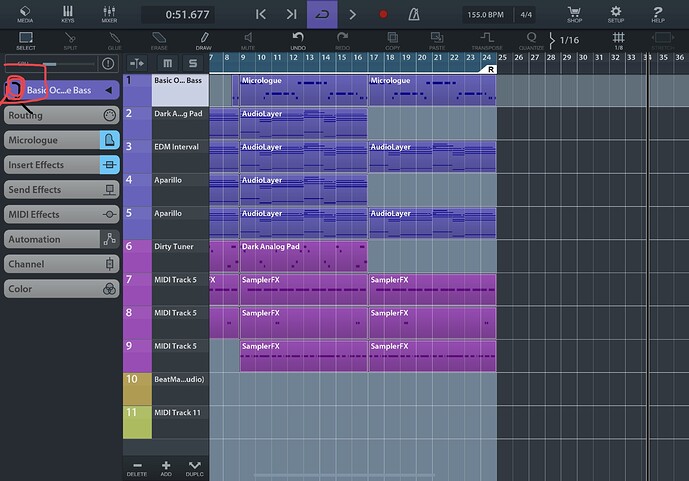 A big feature-Request:
Ableton Link!
Would make it a lot easier to sync all the recording via Audiobus apps via Link! All the apps have instantly the same BPM and start running at the beginning of a bar.
Please implement.
Learn from Microsoft: They use the strategy: “Embrace and extent”. Means: Implement the features of your competitor. Use them, make them better. And: gone ist the advantage of the competitor (anyone remembering Netscape?).

eg Patterning and Blocs Wave export their Arrangements as Ableton Live Sets.
So there must be a description how to implement that.
These Sets should be importable vor Groove Agent into Cubase. And as mini Groover within Cubasis: Predefined Drumstation like the drumstations within Cubasis with an additional Tab to trigger them via Midi-Patterns (into which the Live-Sets should be transformed). Complex, but easy, and: Would make Cubasis the greatest IOS-DAW ever!!!