I’ve encountered this problem numerous times when working with groups, however this is the first time I’m addressing it and hopefully it would be considered as a new feature in the future. Working with groups is very one dimensional and limited in functionality and it would be great if the feature of groups could be expanded more (in terms of functionality). I would like to be able to import groups from other projects. It would be great if a new feature was implemented that would allow me to drag and drop groups onto other projects. Maybe groups could be encapsulated into its own container format so I can load it into other projects.

The reason why a feature like would be considered necessary and useful is because sometimes when you’re working on a really big project (for example a song with multiple layers, for example 10 different vocals merged/encapsulated into one group) you need to be able to organize and keep your projecrs neat and tidy so that you’re not confused as to what layers belongs to where.

@Unmixing actually you can already do that :
Open 2 projects, and in one of the projects select a group layer in the Layers panel, then click Layer > Duplicate to… and select the second project. That’s it 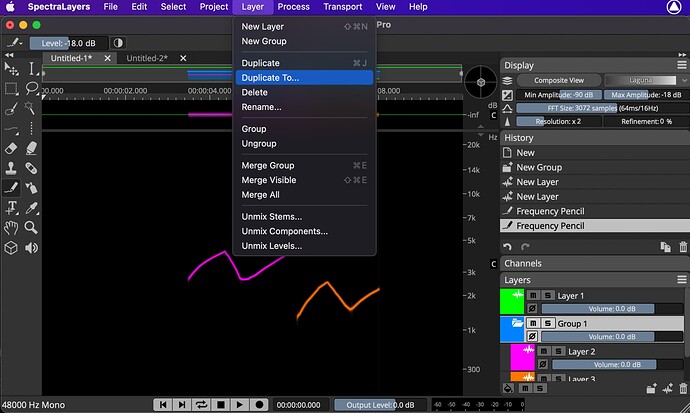 Ahhhh okay, didn’t realize that. Thank you very much.

I believe the terminology could be improved. I didn’t realize that “duplicate to” pertained to “groups” because when I read “duplicate to” I always perceived/assumed it as “duplicate layers” and not “groups”.

Maybe perhaps in the menu in the “Layers” tab under the “groups” section, an option could be added as “duplicate groups to” so it is clear that it is pertaining to “groups” and not “layers”.