With the default setting as shown: 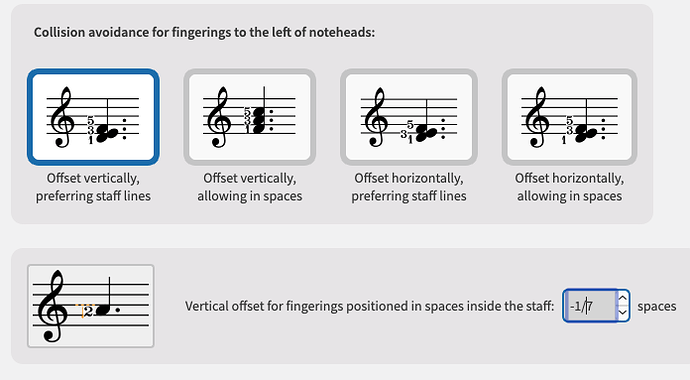 When “allowing in spaces” is selected, it looks like this:

I want it to look like this, with each number centered in a line or space, which is actually the way it appears in the Engraving Options examples above:

But when I adjust the Vertical offset shown in the first example, nothing happens. What am I doing wrong?

You should set Collision avoidance for notes to the left of noteheads to Offset vertically, allowing in spaces if you want the fingerings to be centred on the line or space on which the notehead appears (wherever possible). That produces this result:

Thank you, Daniel, but my second example above shows what happens (with my setup) when I set it to “Offset vertically, allowing in spaces”, that is, it is still a bit off-center.

Could this be because I am using Maestro finger numbers? And would I then need to adjust the numbers in the Music Symbols editor?

Also, I don’t care for the whiting-out of the staff lines. Can this be canceled?

Yes, it is most likely due to your use of a different font. I’m not sure you’ll be able to make an adjustment in the Music Symbols dialog that will correct for that offset, but it’s worth a try of course.

I will try that, Daniel. I added another query to the previous post as an edit, but your answer was so rapid that we crossed. It concerned the ability to cancel the whiting out of the staff lines.

Adjusting the Maestro numbers to a vertical value of 1.00 in Music Symbols… centered the note heads, and I found the option to turn of Erase Background etc. Sorry., I keep missing the advanced options. Thank you for your help, Daniel.