First steps - what a disappointment!

The video was useful up to a point, although several times the person presenting it decided to enter notes using his keyboard, and no help was provided as to how the notes were to be added manually. I can understand that this could have saved time, but it was not helpful.
I printed out the PDF file of the Walzer Capricien, and soon discovered that it was not the same as the note entries. Some of these should be corrected at the end of the booklet, but why has this been left to pages 62 - 69 ? There were no references to these corrections (splitting beams, sterm directions etc ) I felt that there were mistakes on my part in following the instructions, only now to discover that these corrections are much later in the booklet.

I have not reached the sections on engraving and printing, and playback is still not yet on the horizon. The video gave information on other options, which was not helpful to me.

Might I suggest an First Steps Intro booklet, using something simple, like a piece from Anna Magdalena, to introduce note entry, bears, and the basic elements of putting music down on paper. The Waltz, although it covers a substantial numbe of musical items, could be seen as much too complex for a “newbie” like me - it could be most useful later when the basic elements of putting notes on paper are already known.

Now, to complete pages 49 and 50, and make all the other alterations I need to before I continue.

Thanks for the feedback, Bill. We conceived of the First Steps guide as something to work through on its own, so I would recommend sticking with the guide itself rather than additionally using the video. In order to keep the guide as concise and manageable as possible, it limits discussion to only the things that you really need to know to make progress.

I’m sorry that you have found the guide to be less helpful than you had hoped, but I am pleased to say that on the whole users are finding it to be very helpful. It is unrealistic to expect that a single document can suit every user’s way of learning and teach them everything that they could possibly want to know, but other resources exist to help you learn the software, and I suggest you make use of them as well.

Bill,
I feel your pain… I, too, am a Newbie and have had the product for only a few weeks. I have the .pdf manual which I found to be more useful once I went to the index (at the bottom of the manual). There you can look for something your interested in alphabetically and it has links to the pages that might answer your questions.

I found the first steps video not very helpful and somewhat confusing. I think they should make a series of first step videos starting with something simple like “Mary had a Little Lamb” and go thru the entering process with both MIDI and computer keyboards and adding and subtracting a few items. Then part 2 thru part 10 would delve into more and more features.

I’d like to echo Daniel’s comments thanking you for sharing your experience, it really is useful to hear this sort of thing and I’ll certainly reflect on it.

The hope with the First Steps guide was that a beginner really could go from start to finish, and every necessary procedure that needed doing would be covered at least once in complete detail (exactly which keys to press and in what order etc); but there would still be room for users to have a go on their own once they’d been introduced to how to achieve something, to digest the method for themselves.

The reason there isn’t a “run up” of a much shorter piece at the start of the First Steps guide is it basically already exists on its own: if you’ve not already seen the Resources page John Barron put together, do take a look. On it, you’ll find this short guide to basic note entry: 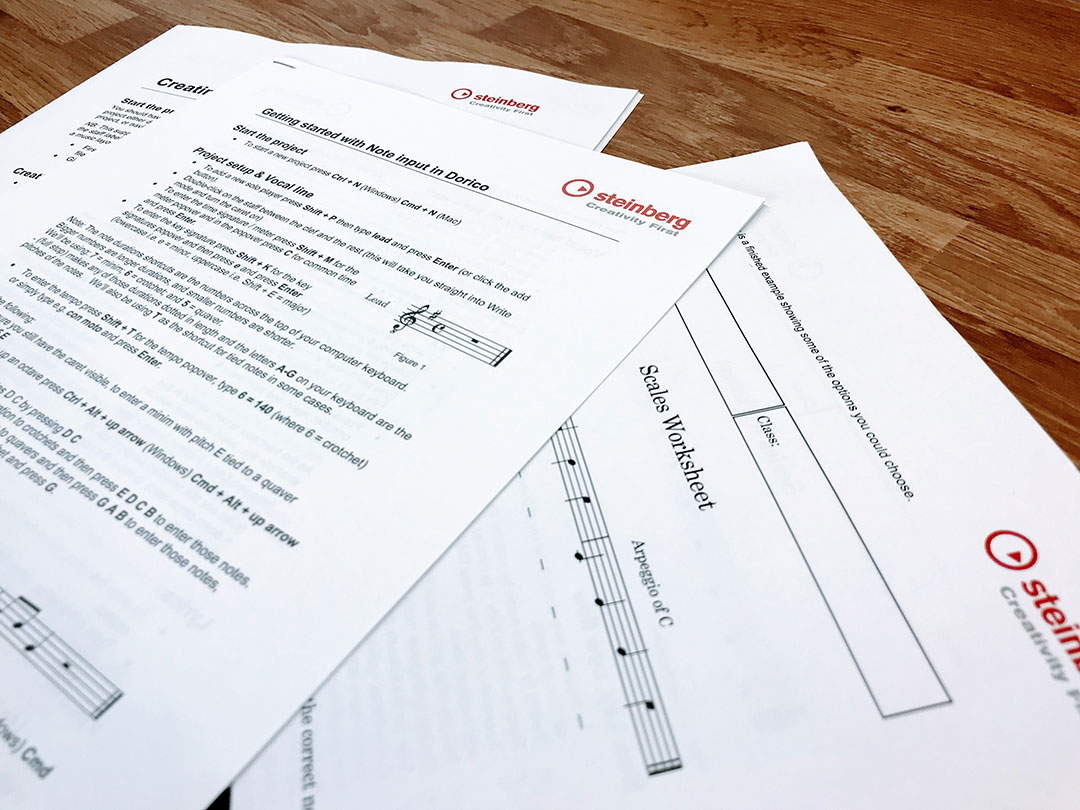 Getting Started with Note Input – Dorico

Creating a worksheet handout For a handy reminder of Dorico key commands (shortcuts) please see the Quick Reference Card article where you can download the card to print and fold to put on your desk.

When we asked users to road-/beta-test a first draft of the First Steps guide, we got some really helpful feedback, including that some clarifying sentences about changes that will be handled later would be appreciated. Hence the last sentence on this page, mentioning that “Changing the beam grouping will be covered in a later task.”; here that changing stem directions will come later; and likewise here that respelling notes will be covered later as well.

In his Discover Dorico live version of going through the guide, John won’t have necessarily explained all this detail, I imagine as he wanted to share thoughts and information around what was already written in the guide (to avoid becoming simply an audiobook version of it!) but it is hopefully in the right sort of places in the written guide when followed start-to-finish.

@Doug2430 have you come across the Getting Started with Dorico SE playlist on our YouTube channel? It’s aimed at SE, but is relevant for all product versions and is a great set of introductory videos for beginners (and you get to see Anthony Hughes for real!)

For instance, this particular video in the playlist is basically exactly what you describe in your comment: 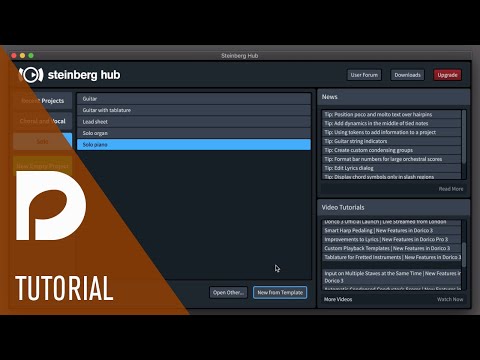 Personally, I find the on-line reference easier to use than the PDF manual (although I do keep the PDF on my computer as well). In addition to everything else, updates are likely to appear first in the on-line version, and I find the search capabilities useful, especially once I learned that how to do something usually has a verb in the appropriate link (e.g. changing whatever).

While watching John Barron’s latest stream, the thought occurred to me that I could do with something like the Associated Boards grades for Dorico. Grade II Setup, grade V Write, grade I Play etc. I’m going to watch the stream again in the morning, and maybe note something down.

Hello Lillee, I hate to come back to you, but the beam grouping is not in evidence in either the guide or in the video, so I am none the wiser as to how to do it. I have just looked again at the video, and there is no help on these problems, nor, incidentally, in the Dorico 4 guide, as far as I can see.

Please can somebody simply put all the instructions as to how to complete the Waltz somewhere, so that I can at least complete this introduction to Dorico ?

How about on this page from the First Steps guide, called “Changing beam grouping” ?

Dorico automatically beams notes according to the prevailing meter (time signature). The original edition of this piece has some beam groups that don’t follow the meter, so you must change the beam grouping manually.

It’s in the next section beyond the “getting notes and notations in” chapter that I believe was what John covered in the Part 1 video.

The First Steps guide, as I wrote it and in its written, published form, is the full set of instructions to complete the waltz. It’s not like the manual: you won’t really find cross-links between topics because it’s intended to be followed through in order. I spent not inconsiderable time putting it together and making sure that every step was accurate, not just taken in isolation but relative to what had come previously; so provided you read it through from start-to-finish, you’ll complete the project.

A beam is a line that connects notes with tails to show rhythmic grouping, which varies according to the metrical structure of the prevailing time signature.

Thank you for your help - apologies for miss spelling your name.

No worries at all Bill – as you might imagine, I’m accustomed to creativity in that area

@AlanYe, I believe Bill is already aware of the live video version.

Having looked up the references you sent - thank you - I found the section the First Steps as you said. The only thing which seemed a bit odd is where they were - on page 49 is a heading ‘finish writing the music’, and on the video, when this page was reached, the distinct impression givne was ‘well, now you are on your own’.

The sections and instructions for beam splitting etc were on pages 63 to 69. Why ? It would have been useful for them to be earlier, so that my (and possibly others) confusion would not have taken place.

Anyway, I have found them now, thanks to you, and my apologies for asking. Now to complete the task, and progress from there.

Careful what you ask for…

The section titled “Finish writing the music” is there because at that stage, the basics of how to input all the different types of notes and notations have already been covered. I had two choices: 1) to write out every step needed to input every single note and notation in the piece, from start to finish, repeating the same procedures multiple times in the process; or 2) give users the opportunity to apply the techniques already covered to complete the piece on their own, thereby solidifying what they’ve learned and giving them a sense of independent confidence using Dorico, with a page of tips, pointers, and reminders to assist them. I opted for the latter.

Changing beam grouping is covered later because it’s not “inputting music”, and would interrupt the flow of “learning how to input music”. Additionally, the philosophical divide between “writing” and “engraving” is a core feature in Dorico, but that might feel unusual for users coming from other notation software. You may notice that the topics included in these two “chapters” more-or-less match what is possible to do in Write mode and Engrave mode respectively. This is because I wanted the guide to introduce users to an idiomatic “Dorico workflow” (first get the music in, then make it look nice) as well as the basics of functionality. In Dorico, it’s not necessary to control every aspect of notes and notations the moment you input them: there are umpteen default settings available that you can review at any time, and things like stem direction, beam grouping etc can update automatically when you input the next note.

And finally, as I mentioned earlier, there are explicit mentions during the “inputting music” section that these sorts of details will be handled later, which I would hope manage most users’ expectations.

“Dorico workflow” (first get the music in, then make it look nice)

Essential. — And I might add that with common notation most of it does look quite nice with the defaults. And most of the things {an experienced music copyist new to Dorico} might want to tweak are handled in the various settings. I think of manual adjustments in Engrave mode as a third layer of refinement.