I am using the Drum Editor to control keyswitches, in my case LoopMash FX,
routing a MIDI track to the plugin´s MIDI input.
The main benefit for me is that I am able to label each key individually,
so it shows its function directly in the Drum Editor.
This technique is also viable for plugins like Sugar Bytes Artillery for example,
where I can have one effect per note or zone.

drum map for control.jpg1139×517 122 KB
The only “problem” is, that when I make a swipe, it creates - naturally -
multiple events of the same length (by default 1/16). but for controlling LoopMash FX
I need a function to visibly control note length.

I´ve got a couple of approaches here, which hopefully might be considered:
a) a function to join multiple selected drum notes to create one larger, summing its duraction (there is no Glue Tool in the Drum Editor), or
b) a drum editor, which shows the real length of notes and permits to draw them in different lengths with the pencil tool, or
c) a mixture of KeyEditor with keys on the piano roll, that can be labeled by the user.

I understand, that the Drum Editor creates many individual notes due to the percussive nature of drums,
but for controlling LoopMash FX it is kind of impractical.
I discarded the option of creating automations, as they cannot be recorded via MIDI notes.

Or does anyone have another idea?

All the best and HAPPY NEW YEAR/GEAR!

You can download the LoopMash FX Controller drum map here:

Use INFO line to adjust length if you need to. 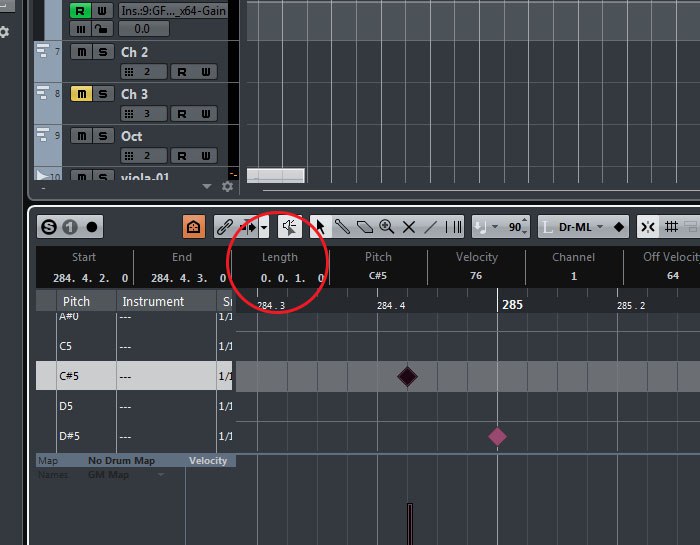 Use INFO line to adjust length if you need to.

Nice tip! I’m liking Cubase more and more. I would have given a leg and arm to have an info line like that back in Sonar. Some percussion libraries will have a drum roll which is length based, Garritan comes to mind. These almost always sound better than what you can do by hand, plus it’s way easier to to use a CC for expression during the roll.

I already saw the Note length option. I just find it easier to select notes with a glue tool and join them,
instead of switch continously between note length. Nice tip though. Thanks for pointing that out.

All the best and HAPPY NEW YEAR/GEAR!

b) a drum editor, which shows the real length of notes and permits to draw them in different lengths with the pencil tool, or

It’s closest to what you ask and you don’t have to switch between note lengths after you’ve set it up.

c) a mixture of KeyEditor with keys on the piano roll, that can be labeled by the user.

I use Expression maps for these kind of things. Once you’ve set them up for each MIDI control device it’s very convenient.

Thanks a lot for the animation. This does mainly resolve my issue. I didn´t notice,
that we now can switch between Drumstick and regular Note length inside the note length option.
I´ll still have to glue the notes manually though.

Thanks to everybody for helping me out and pointing me to that solution.