1. Summary/Title
Freeze track audio does not capture changes to insert audiofx when controlled by another midi track.

2. Description
We now have the ability to route midi to some insert effects to change their parameters. This works fine when listening to the playback, but after freezing the track the insert effect parameter changes controlled by the midi routed from another track are ignored and the audio you get is as if the FX was stuck on it’s initial state.

3. Expected Results
That track freeze audio should sound the same as the playback before freezing down the track.

Here is a video of the issue: 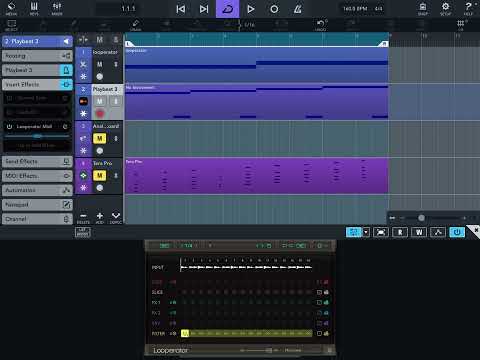 Only the first 2 tracks matter for this issue. The first track is a no-instrument midi track used only to write midi to control Looperator midi auv3 which is an insert audio effect for the second track. The second track is Playbeat 3 , an auv3 drum machine, which is using midi on it’s own track to switch patterns, but that is not relevant for this issue.

Then I freeze the playbeat track (track 2) and you can hear that the audio it produces is only using Looperator preset 1. It is only swiping down the filter then resetting. It has ignored the midi information from track one, that should have caused it to switch to preset 2, so it remained stuck on preset 1.

Thank you for your message.
The issue is planned to be resolved with the next update.

Thanks for the reply, looking forward to the update.

So as a workaround for now I have figured you can just solo the track and mixdown to get an accurate audio track and then paste that from the media bay into the timeline.

Thanks for sharing your workaround in the forum @Nimgwen!