Getting Novation transport controls to work

OK, as we all painfully know, Novation says they’ll get Automap to work some day for C9. But don’t hold your breath:

A place to discuss and assist with Steinberg products and services.

The SL Mkii does talk to C9 when it comes to keyboard notes and the pitch/mod joystick. But transport is a problem. I have a partial solution. The answer is mostly covered in Reuben Chng’s remarkable video: 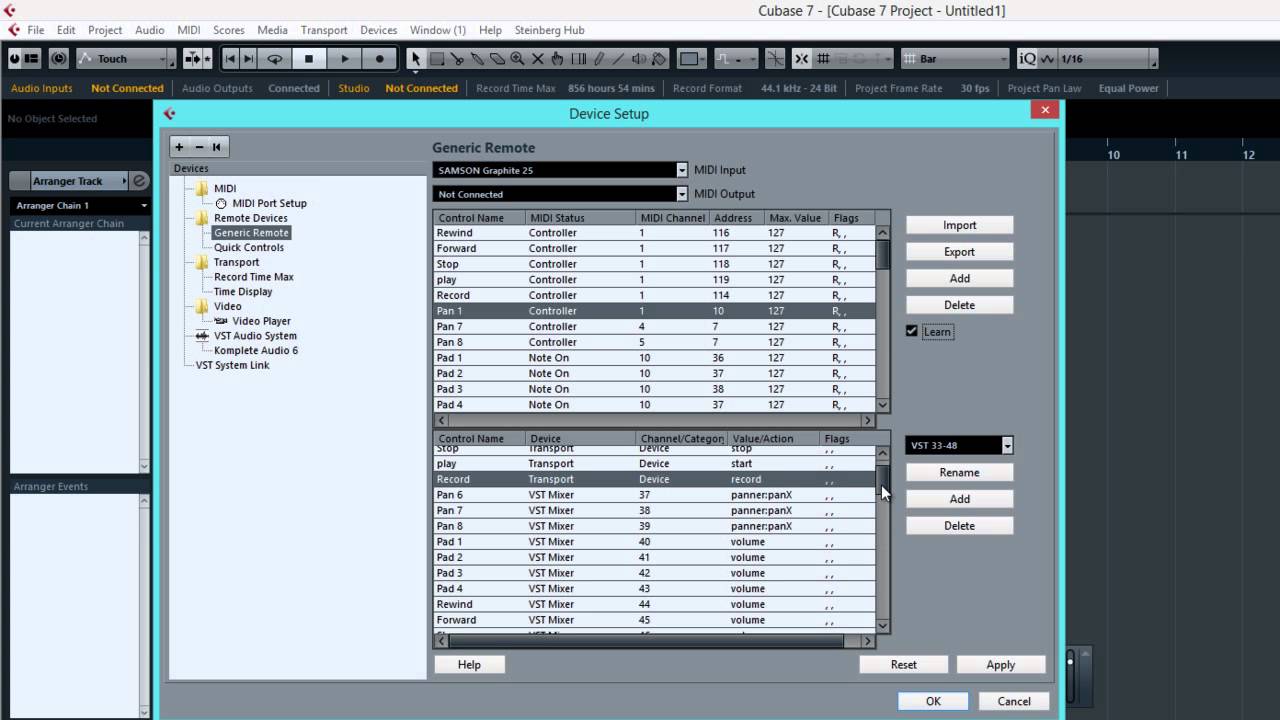 But his method doesn’t work on the SL Mkii unless you do 2 things first:

If the transport button is engaged, then the SL Mkii sends out messages of the form F0 7F 7F 06 01 F7, which means stop. It’s the same message for play, except that 01 becomes 02. No message is sent out for “loop”. The F0 status byte indicates a system exclusive message, probably of the MMC variety. We can see these messages in MIDI-OX, but not in the C9 MIDI monitor. (A midi insert). C9 is discarding these messages, so nothing happens when you hit stop. Reuben Chng never had this problem. If instead you move a fader or play a note, then you do see changes in the device setup window.

By disengaging the transport button on the SL MKii, we change the messages generated when the button is pressed. Stop now produces the messages B0 5D 7F when it lights up, and B0 5D 00 when it becomes unlit. These messages are not screened out by C9, so they can be assigned; just like in the video. (FWIW, these are continuous controller messages carrying max/min data values. Each button is a different CC.)

Where this leaves you

Can we do better

The flags in device setup for toggle/push button/not automated don’t help at all, in my experiments. See https://steinberg.help/cubase_pro_artist/v9/en/cubase_nuendo/topics/remote_control/remote_control_generic_remote_device_t.html

The SL MKii also has an option for reprogramming the button behavior, as outlined on page 32 of their manual. However, nobody knows how to do that. Their manual is bewildering, as is everything else out there on the subject. Perhaps one could use the Cubase logic editor to fix improve a few things, but I seriously doubt it would be less confusing. How would the SL MKii know what state to apply to its button LEDs? The result above is a bit awkward, but at least it can be used in a consistent manner.

I’m using an 49SL MKII and I have no problem with transport control, mixer settings or even the User buttons. I’ve spent hours on the phone with their support and, although the product doesn’t fulfill all promises, it still functions as a basic desktop controller. That said, my workarounds are to use QWERTY commands for the USER functions and to keep the software at the 4.92 version. I avoid their beta releases and I keep a backup copy of my setup file because that is vulnerable to change. Make sure that your Automap is loaded in the device window but that MIDI I/O is showing as Not Connected. That’s the only way it works on my system.

By Jove, you’re right! I went thru the Automap software setup – pretending it was Cubase 8, but all the time using C9 – and the transport works fine. Well, back to the work of making music then.

When I first installed Cubase 9, there was no entry for Novation Automap in Cubase’s Device Setup list.

Then, I set it up per Novations knowledgebase article at

You can change button behavior (CC, note, SYSEX or disable) if you long press EDIT and then button that you would like to modify. If set PRESS 1 - 127, PRESS 2 - 127, display 0-127: transport buttons will work fine as CC.