Grandstaff with Midi in Dorico se

Hi, I am just getting started with Dorico Se.
I would like to be able to play a piano part onto a grand staff.
I got it to record and notate two-handed part using midi/ Record,
But it put all the notes in the treble clef, and nothing in the bass clef. (lots of ledger lines)
Does anyone know what I’m doing wrong?

On the other hand, when I imported a piano part from cubase, it was distributed nicely across the two Staves. This leads me to believe that it can be done.

Thanks for any help provided
David 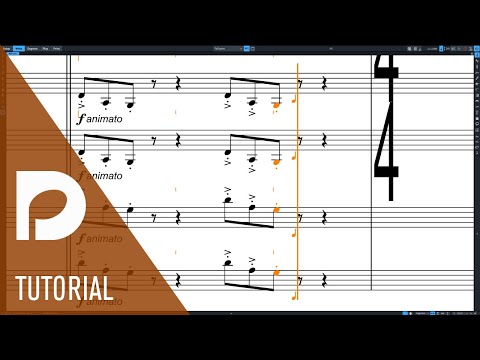 Thank you for the link.
I may be too new to this to get it all, but I don’t think the SE version has the midi note split thing.
I did get it to print on both staves, but I have no idea how. It just sort of happened.
The learning curve is steep right now, which is to be expected. I just wonder if I would have a easier time if I upgraded to elements, or does it make more sense to stick with SE for a while to see if I like it.

Do you have the option to get the 30-day trial version?

When you recorded MIDI, was the caret active (the vertical orange line)? If it was, then Dorico will record into the voice indicated beside the caret. If it’s not active, Dorico should use both staves and multiple voices as required (in version 4, because v4 introduced polyphonic MIDI transcription improvements).

I did look on the Steinberg website. Didn’t find anything except for the free download for the SE version. Maybe I missed it?

Thanks. I’ll experiment some more.
So if I just click on the First rest in the first measure, that should set me up to record?
Is that the standard way of doing it?

Now that I think about it, I think I changed something in preferences so that the carret is always visible. So then, I was able to use the transport controls to move it around, Which I found much easier, like a daw. And I think thats when it started to print on both Staves.

The caret is the orange line that lets you input notes. The playhead (link from the 3.5 manual) is the green line that shows where playback is at currently/where it last stopped.

Simply selecting a rest on the piano staff and then starting MIDI recording should be enough, exactly right.