When I first open a project or create a new one, the page is nice and clear. When I hit Play for first time the GREEN SCROLL BAR appears. When I’m done with play and want to continue in Write or Engrave mode the GREEN BAR stays on the screen and sometimes it partially obstructs a note. Also when I zoom in, the GREEN BAR zooms along and gets fatter.

I also noticed that when I went into engrave mode and created frames, I lost the GREEN BAR. Now when playing I no longer see it.

At the moment it isn’t possible to hide it, but I believe it may be in the next update as Paul has been looking into it.

I also edited my post and mentioned that when I go in engrave mode and create a frame, the GREEN BAR disappears and I don’t know how to get it back. I guess this a bug that will be fixed.

I don’t have that problem - the green line doesn’t disappear.
What type of frame are you creating?

Ah yes I see what you mean. I’ve found that switching to a different layout / part will make the line appear again.

Yes, that’s true but when you go back to score view, the line is still missing.

Not for me - the line comes back when I switch and switch back, but interesting to know, thank you.

This is likely to be a manifestation of a bug I fixed just after 1.0.10 (which is why John isn’t seeing it).

Great to know you guys are on it. Thank you.

There’s also a new option to hide it if you’re not in playback.

Does this option exist now or is it up comming?

I do have Dorico 2.2.0.1108 and in Preferences, assuming I did the right thing, I unticked the two elements in Tête de lecture (see attached screen capture). But the green bar is still showing. Any clue?

Thanx for your help 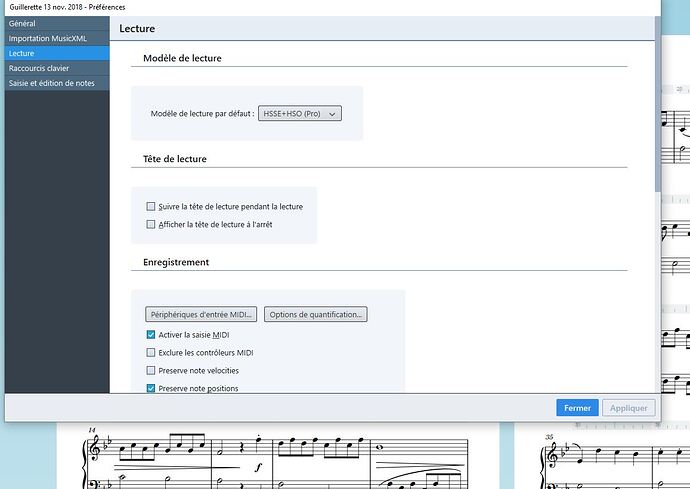 Yes, switching off ‘Afficher la tete de lecture a l’arret’ will hide the playhead when playback is stopped.

That’s weird. Have you tried to quit and restart Dorico? It might be a redraw glitch…

You can play back the score while in Print mode, without the playback line.

However you will have to figure out how to make the staff spacing match the screen window size neatly, and scroll the score yourself (e.g. by pressing the page-down key).

It might be easier just to export the score as a set of graphics images, record the audio, and make the video outside of Dorico.

I dream of a unique software that makes video scrolling score without playhead like we see and listen to on YouTube. Any geek out there to program such a software? Or maybe, adding that kind of feature in Dorico? I have the right to dream! … and to sing the blues.