Hello, I have a problem with the application I just bought, I have an iPad Pro m1

And I can’t modify the metronome, the one above yes but not below and I need because I work in 6.8 beats and the second number I can only in 4 and the bmp only has one limitation too! Please fix it because it’s an instruction from my job and that’s why I bought the 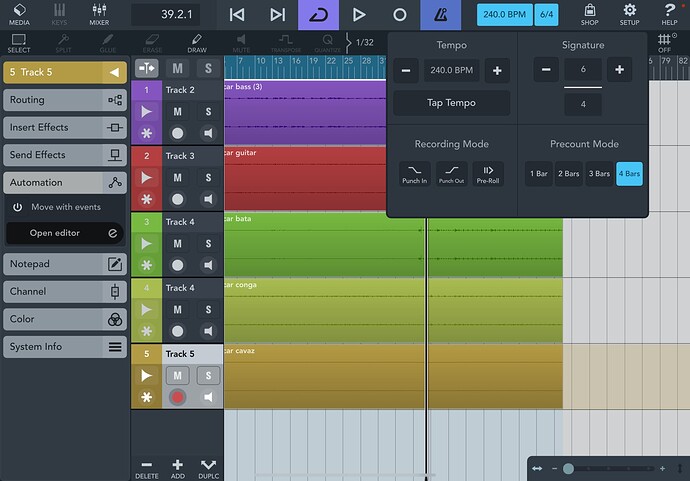 I speak spanish. A common problem is that people who write in spanish here explain themselves with a so extremely bad redaction, that it turns almost impossible for english speakers to translate it with software and try to help. I have issues to understand it, and spanish is my mother language. @alemguzman por favor para una próxima vez intenta explicar y redactar bien tu idea, de forma comprensible, para que te puedan ayudar, especialmente si deben traducir.

I will try my best:

"Hello, I have a problem with the app I just purshased. I own an iPad Pro m1 and am not able to modify the metronome. I can modify the one above, but not the one at the bottom (I guess he means here the numbers in time signature). I need to do so, becasue I use 6/8 time signatures and I can set the second number just at 4 (¿maybe that?). The bpm have a limitation too! Please fix it because I work with that and that was the reason I purshased the app.

I guess this is Cubasis and not Cubase? Maybe this thread should be moved over there?

If Cubasis doesn’t support 6/8 time, you could either use 2/4 with the same BPM and use triplets, or use 6/4 with double BPM (but I don’t know if there’s an upper limit to the metronome, the BPM numbers might go quite a bit up for 6/4).

Maybe someone in #cubasis will know the best practice.

Edit: Changed the tag to Cubasis, apologies if I shouldn’t have.

Indeed, that was discussed here

Hi @markus.horisberger, Thanks for your message and welcome to the forum. Unfortunately, the situation in regards to time signature support has not changed. The feature remains on our list, but we do not have further information available, when it will be included in Cubasis. Thanks & stay well, Lars

from 2013 to May 2021 last post. It is apparently still not possible to change the 4 to 8. I didn’t read the whole thread, but at least in my Cubasis I am not able to change it.

Hello friend, from the outset I say that I know perfectly well how to write in my mother tongue, but I’ll clarify it for you right away. That I’m a sociolinguist and not proREA, so if you really speak Spanish, you could have helped me, right? Instead of criticizing, I clarify, sociolinguists are Spanish teachers who have as precise the idea that what really matters is to make themselves understood and not follow the grammatical rules that are sometimes absurd in a cultural context … and I did not know that I should speak in English here. I can’t find any rules for making a post on this site. Hugs

I was not able to help you in the first turn, because I wasn’t able to understand well your not proRAE sociolinguist writing. In the second turn, after some thoughts, I was able to maybe understand, so I waited to be near my tablet with Cubasis and did some tests. After that I searched in the forum for similar problems, for you, and pasted a thread I found, in case this would be helpful for you.
Your reaction is the typical reaction from people who aren’t able to clearly express themselves. I wasn’t asking you to follow that RAE rules, just to write clearly. I am only sorry for your students and don’t believe you are sociolinguist, sorry. I don’t want to hear from you never in my whole life, I will block you in this forum, so please don’t write to me anymore. Good luck with your glorious start in this otherwise helpful forum.