Help for Adding of a Custom Instrument Needed! :-)

Having multiple separate .doricolib files for the supported languages doesn’t helped too…

What worked for me is making sure that the doricolib file has the full set of entries for instruments, instrument names, families definitions and score orders. And what I was suggesting earlier to is experiment with adding another node for instrument names in a different language to that file, that already works in English. I don’t know if this makes a difference, but the way your screenshot looks is that all those other components are missing and only the instrument names are shown here. If you want to, post the file and I’ll test it tomorrow?

Thank you for the assistance!

Great discussion! Y’all made me finally dive into the doricolib file, which is clearly now the correct way to be making these edits as to leave the factory files intact. I might just leave any custom instrument in a “Custom” family, as to leave the default definitions unchanged. Everything seems to be working so far anyway! 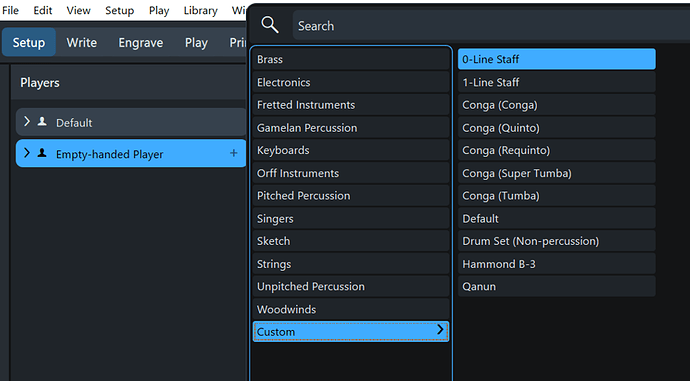 I might just leave any custom instrument in a “Custom” family

Good idea! I made mine nest under the default instruments but “Custom” family sounds sensible.

By the way, what is the correct score order for Quanun?

Hi @FredGUnn,
This approach is far more correct than messing with the factory .xml files.

Unfortunately there is a problem with it… it’s a singular language method. We need a way to use them
also in all other supported languages.

@ebrooks,
The Qanun is part of a zither family.
In orchestral score order it could take the place of the harp, for example, or solo instrument.
Depending on how you are using it.

Unfortunately there is a problem with it… it’s a singular language method.

Let’s not so quick to blame Dorico, especially for something that’s really a hack that’s not supported!

I’ve not been able to figure out how to force language switching from Engrave Options, BUT - I did notice that Dorico takes the top-most Name Definition from the list if I add two languages. If I have the German naming as the first naming node in the tree, that’s what Dorico will use (the below config will display the German name):

I’m not sure if there is some additional mechanism at work to switch display language when Dorico is already running and that’s beyond the doricolib capability, but I don’t think I tried all variations I could think of yet, so who knows. I assume that all active libraries must be loading at startup time, so perhaps it’s connected to that somehow.

Hello dear team and colleagues,
I need an additional help which is related to the case where we are having a custom instrument which looks like a transposing, but actually it does not transpose.
I’m talking about the Bulgarian Kavals in C and in D, both of them non-transposing instruments, which looks somehow against the classical practice, they differ only in their tonal range.
We are having a B flat Kaval, too… but still I’m waiting for information if it’s a transposing instrument, or not.
I’m wondering how I could make them appear in my instrument list by their names Kaval > C, D
but at the same time to appear in the score as non-transposing?!
Of course if the Kaval in Bb isn’t a transposing instrument, I would like to add it by it’s pitch name, too, but without scoring transposition.

Here is the xml code for the Kaval in D: 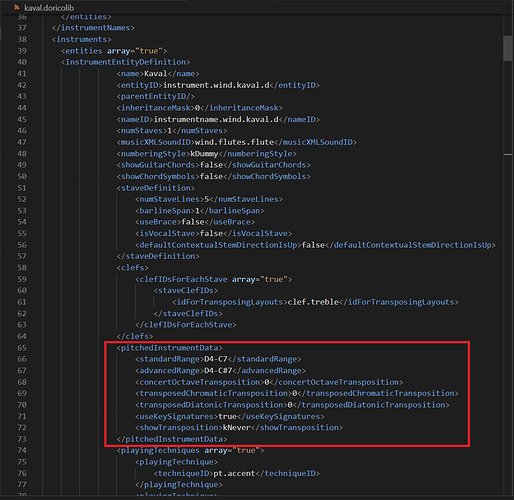 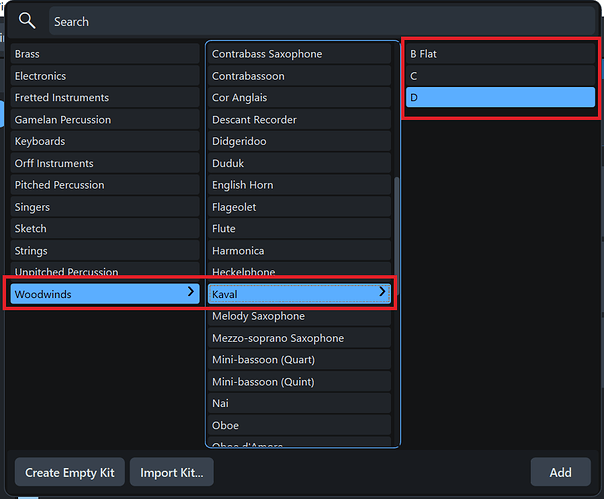 I would be very thankful if someone is able to assist me, of course if this wish of mine is possible to be achieved in the current version of Dorico!

Surely whether an instrument is transposing, or not, is simply determined by a difference between a written note and a sounding pitch?

Surely whether an instrument is transposing, or not, is simply determined by a difference between a written note and a sounding pitch?

You are just half-way right but not exactly. This is how the things look on the score sheet. Actually the way of playing on the instrument determines if it’s a transposing, or not.
For example the Clarinets in Bb and C (this one is non-transposing). Why the one in Bb is a transposing?! Just to make the players life easier by preserving as much as possible the same finger positioning when he/she switches the instruments. The very same whole which produces the pitch of D on Clarinet in C will produce the pitch of C on Clarinet in Bb.

Hi @FredGUnn,
Still I’m not sure about the one in Bb, also we are having rare variants in A and E. Unfortunately
there is information only about the most commonly used variant in D. I’m waiting for feedback from a professional kaval player to make this point more clear to me.
In case the Bb is a transposing, then I should specify those in D and C, too, no matter that they don’t transpose.
Until then I’m just wondering if the thing I’m trying to achieve is possible?!

Consider two players with ‘different’ instruments. If, when seeing the same written note, they play the same pitch, neither is transposing.

Until then I’m just wondering if the thing I’m trying to achieve is possible?!

I’m not really sure. It’s certainly easy enough to change the name, but then it wouldn’t follow Dorico’s “Show transposition” rules. In the case of the Tuba, the player obviously knows which one they are holding and what fingerings to use, would that not be the same case with a non-transposing Kaval?

In the case of the Tuba, the player obviously knows which one they are holding and what fingerings to use, would that not be the same case with a non-transposing Kaval?

Fred, most probably the logic is the same.

The Kaval is a very beautiful and magical instrument, but I don’t play it, nor even I’m having a book about the traditional instruments of my homeland. I’m not sure if such book exists at all?! hahaha

I wrote for a Kaval player once, in that video I posted on your Qanon thread. As I didn’t know the instrument well, I asked the player for range info and anything idiomatic I should know. Here’s what he told me:

"The kaval is almost fully chromatic, with a few exceptions. These exceptions are somewhat gotten around by having multiple kavals tuned a half step apart. My primary kaval reads starting from C4 (but sounded C5), then there is a whole step interval to D4, then chromatically up D#, E, F, G, A… comfortably until around read G5 (sounded G6). The lower sounded C4 octave can be played as well but there is a break from sounded A4 to C5.

This lower octave can also be played at the same time as the higher octave in a technique called “kaba” that produces a fatter/denser tone effect.

Additionally, I have kavals starting from C# and D, transposing everything by a half step up. I can figure out which one works for the melody best depending on the range and fingerings.

Ornamentation and different pitch bending/contour is common. Most frequent examples are mordents, inverted mordents, trills, vibrato with mouth/vibrato with fingers."

He sent me a few videos demonstrating various techniques too.

Hi @FredGUnn,
If the kaval was almost fully chromatic, then it was a Bulgarian one. The Bulgarian kavals are the only from the whole family that are capable for not only traditional melodies, but for jazz and classical melodies, too. If you have enough skilled kavaldzhiya (kaval player), the whole kaval could sound chromatic.
It’s the same with the gaidas (bagpipes)… only the Bulgarian dzhura and kaba gaidas are chromatic all western bagpipes are limited to pentatonic scales. This topic could be interesting for you, too.

Since you are interested in the Jazz music, then I recommend you to explore more deeply the Bulgarian traditional music… I’ve never heard something rhythmically more complex than our traditional music… hahaha rarely we are having pieces in even meters.

Here is a small example how we, traditionally recognize 9/8, and how the Western World: 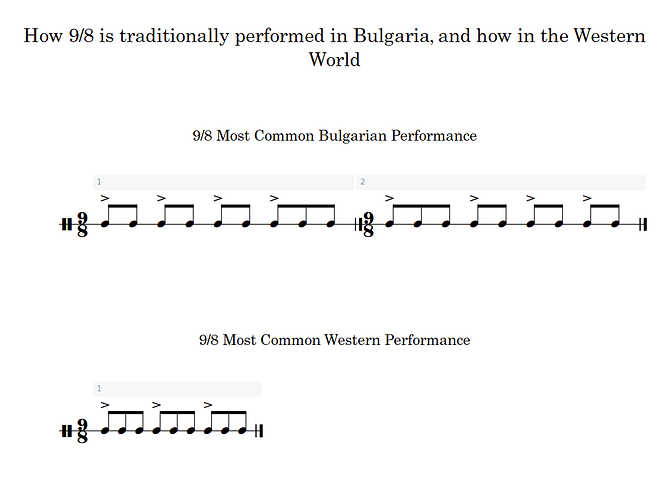 Hi @FredGUnn,
I’ve got a reply from the friend of mine who is a professional kaval player. He told me the following:
About the C and D kavals the most common practice is to be used as non transposing, for the rest of the family in E, Bb and A there is no enough official information.
He, personally, prefers to write for the various kavals as transposing instruments when he writes for himself.
He also shares the same opinion as mine that this instrument should become a transposing.
In conclusion, it won’t be a problem if the instrument is written as transposed.

I’m trying to create some custom instruments on my Mac but without success. Could someone please attach an xml file with a single custom instrument that I could use as a template, and that would go in the DefaultLibraryAdditions folder, as described by eBrooks on Nov 14th in this thread.
All the above examples seem to be for Windows, but I am looking for something that will work on a Mac. It would be greatly appreciated.

There’s no difference in this XML code between platforms. (That’s one of the reasons they develop in Qt to produce all versions.) The qanun.zip file in post #2 should work fine, and it includes modified instrumentnames_en.xml and instrumentFamiliesDefinitions.xml files to show how those work.

Depending on what instrument you want to create, you might want to copy a more similar one from the default files as a starting point.