Help! Quick Controls taking over EVERYTHING!

I’ve been a solid user of Quick Controls since forever, but just now something has gone horribly wrong. I’ve recently migrated to a new computer and forgot to copy across my Quick Controls presets. No problem - found the file in Roaming / Steinberg / Cubase 9_64 / Presets from the old PC and copied it to the new.

I hath spawned a monster.

Not only does it not copy them across, it has made a duplicate copy of the current ones, most of which are junk. Worse, every time I open Cubase, it creates another set of duplicates. This is where I’ve got to (demod in an instrument tracks): 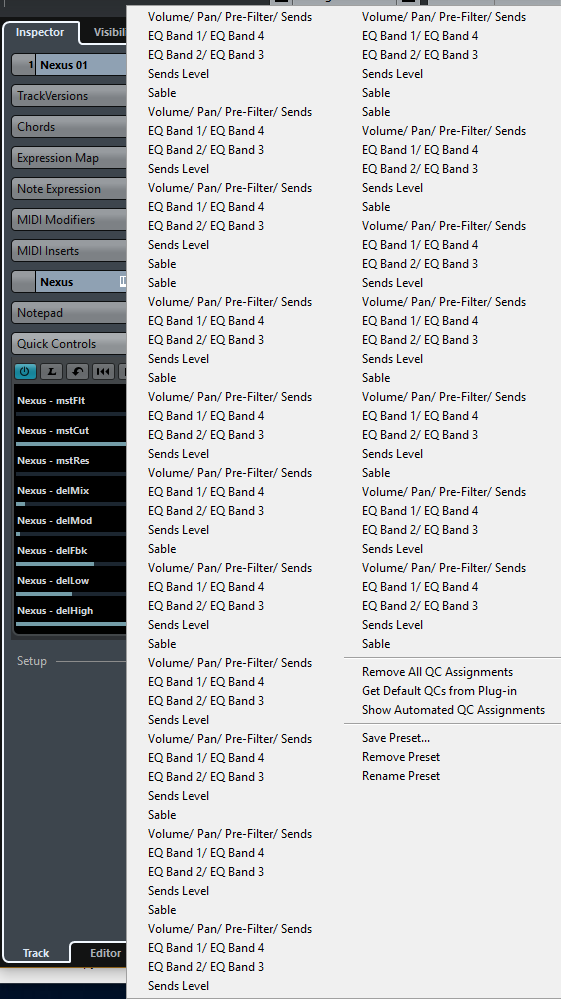 The only one I ever created originally was Sable. Everything else is phantom. If I trash Quick Controls.pxml it just makes a new version with yet more duplicates. I also tried trashing Quick Controls MIDI.xml and even Defaults.xml - this thing is out of control. I’m expecting at this point that it’s going to have to be a full re-install, but anything else to try before such desperate measures? Thanks.

EDIT - actually it’s DOUBLING them all, its now twice as big as the screenshot. Same in Midi Tracks.

Decided I couldn’t wait, but figured out a marginally less painful solution than a full install. I’m back to normal, but those 5 factory defaults I still can’t get rid of - Remove Preset seems to do nothing. Anyone any insight into how to properly preset manage Quick Controls without Cubase going nuts?

Still, it’s - I think - back under control at least. Method of getting back to square one - in Roaming / Steinberg / (not sure of Mac equivalent), rename Cubase 9_64 to xCubase 9_64, then launch Cubase. This effectively brings it back to factory defaults, but keeping the broken install to one side. I then copied my Key Commands and Plugin Manager files from xCubase 9_64 , and did a full plugin scan pointing it at my own folders. Manually tweaked my few preferences, and my I/Os. Probably only took half an hour all in, so not too disastrous.

No idea what caused it to go rogue, but I shan’t be doing any more copying of Quick Controls files in the OS, clearly that is a BAD IDEA.