I’m working on a piece with two solo instruments plus a piano accompaniment, but I want only the piano staves to be blank (so I can jot down ideas during a rehearsal). I’ve tried to follow the instructions but I can’t seem to prevent Dorico from hiding the rests in empty bars in all voices even though I’ve selected only the piano in Players in Setup mode. I’m not interested in removing the rests in a particular layout, just in the piano staves.

If there are any notes in those staves, you should be able to remove the bar rests with Edit > Remove Rests.
If the staves are completely empty, there’s nothing for Dorico to set the starts/ends voice property on. In that case you’ll need to resort to making the rests invisible with the color property.

Florian’s not quite right. If you make the first bar rest explicit (by selecting it and then hitting O) you can then use Remove rests as normal.

Good heavens, how is one supposed to know that? Strangely, Dorico’s behaviour is very erratic when trying to do this. Any changes to the formatting remove the explicit rests in the entire piece and I have to start over. I can’t do this in one go, either. Each movement (flow or not) has to be done separately. I’ve also discovered that working from back to front is the only way to get the hidden rests to ‘stick’. In addition, trying to hide the rests in the last bar of a movement causes all rests to reappear. This shouldn’t be so difficult! It isn’t all that uncommon to want staves without rests in empty bars.

It’s a single setting in Layout Option to do this to all staves: 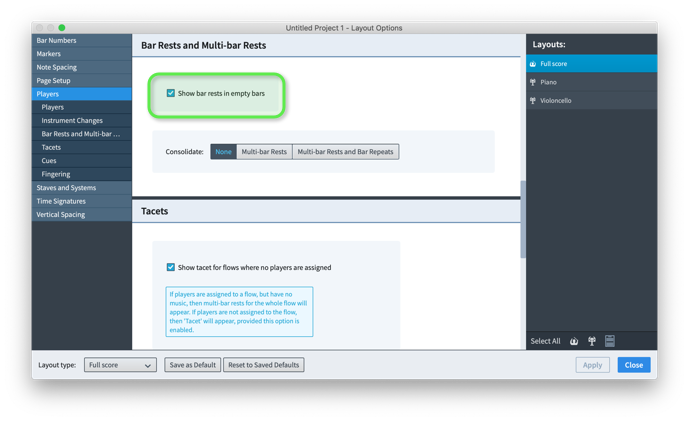 I suggest you use (untick) this setting for just the score. That way you can distribute parts to the other players that will have rests in all the right places.

Thanks Leo, you’re right of course.

Because of all those shenanigans that Vaughan describes I’d probably end up using the color property though, at least in this case.

I know about this setting but, as you know, it removes the rests in the empty bars in all the voices, and it’s the score in which I want to see the rests in the two solo instruments but have blank piano staves. I’ll have to use the colour property for the last bars in each movement. Unless there’s way without all these shenanigans, I think this might be worth a feature request.