How do I create chord symbols from a selection?

I have been trying to get Dorico 4 Elements to generate chord symbols from selection, but have been unsuccessful. I followed Anthony Hughs directions but it did not work. Also, when the menu pops up when holding down the control key, it does not say “Generate Chord Symbols” instead, it says “Cycle chord diagram.” In write mode I have chosen only the piano part and would like to only have the chord symbols generated for that part. I also could not find the same pop up window that says “Generate Chord Symbols From Notes.” Any help would be appreciated.

The first two chord symbols that you see in the music were placed by me manually by typing those in.

I didn’t know about this feature, and missed Anthony’s video - cool! I was wanting this recently too 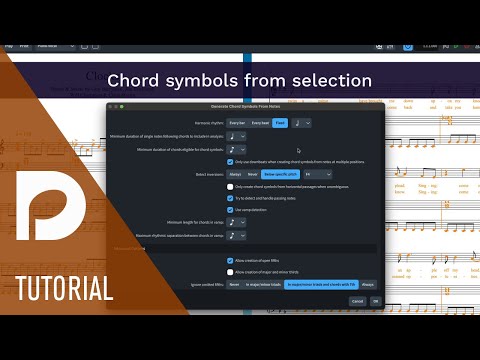 Maybe delete those manual entries and try again? I just selected a bunch of stuff and did it, worked fine.

Yeah works fine even if a chord symbol is already there, it just recalculated. This is fantastic! Do the same with Roman Numerals and that would be fantastic, we’d have the triptych of figured bass, chord symbols and roman.

But the thing is, why won’t it work for me? I followed Anthony‘s instructions to the letter and nothing happened?

Not sure, but I noticed that if you have a bunch of analysis there it will give you a menu much like you already have. If you have one with no chord symbols then it will give you the single choice per Anthony’s video. I don’ t know what triggers one vs the other exactly, but make sure all the chord symbols are cleared out. Also enable viewing hidden signposts and symbols and such, maybe you have something tripping it up that is hidden.

I will try that and also, this project was imported from an XLM file if that makes any difference?

yeah, I really don’t know here but given it was imported seems like there might be some funny business going on in there.

Is it possible that this is only a feature that is in pro and not Elements?

In Dorico 4 there is a new feature that will add chord symbols based on the selected music, which might be worth exploring. It is included in Dorico Pro 4 and is also meant to be included in Dorico Elements 4, though due to a misconfiguration it doesn’t actually work in Elements 4 at the moment: this will be fixed as soon as possible.

Yes, it’s not available in Elements at the moment.

Oh ok, that explains why it does not work now. Thank you so much! And by the way, do you have any idea when this feature will be added?

It will be added in the first maintenance update, coming soon. Sorry for the inconvenience caused.

Ok that’s great! Will that update be seen in the hub?

If you take a look at the Learn tab, you’ll see it in the right-hand column when it gets posted to the blog. It’s worth looking at that at least once a week anyway, as there’s always some interesting new content appearing on the blog (e.g. every Tuesday, my colleague Anthony posts a short tutorial video, normally under a minute in length).

Ok, thank you for letting me know!

Hi,
I updated yesterday my Dorico Elements from 4.0 to 4.0.10. I noticed that the function “Generate Chord Symbols From Notes” is still not there. Is it still on the way or did I miss something when updating to latest version?

yes, now it is there and works nicely. Many thanks.