How to monitor a Dolby Atmos mix using the binaural playback settings for objects and beds,

Hi Everyone,
I’ve tried many things to to get a fair binaural monitoring in Nuendo, I was using DearVR Monitor which is just ok, would be a lot better if wasn’t for the roomy sounding even on Analytic profile. Well… I found a channel on YT and Mr Michael G Wagner gave me a very good alternative, witch is closest I got of the Dolby Mastering Renderer binaural monitoring and for free, just by using DearVR AMBI MICRO.

This is the best I get so far.
Check Mr Michael G Wagner’s video out.
Starts at time 11:30 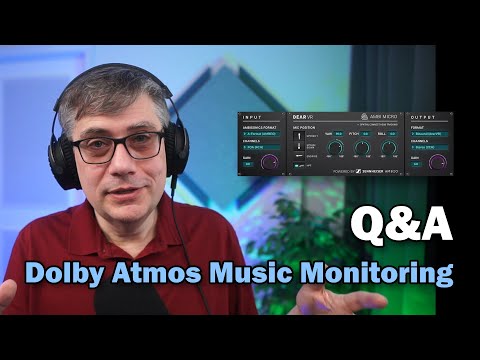 Good stuff. I will give that a try. Thanks Shelly.

first of all thanks for the discussion, it’s a great help for figuring out the best way to work with atmos in nuendo. My conclusion for now seems to be, that if you want to work with atmos, you can not really get around the production suite, which is a shame. I have heard the Dolby is working on making the integration of the binaural Decoder possible in the future, but who knows… So for now I think i will get the production suite and this setup you proposed, Rexler, sounds really good! Could you elaborate a bit on that? Are you working In Nuendo in the integrated atmos workflow and using the production suite only for monitoring? do you use the dolby atmos bridge to go from the production suite back into nuendo? if you make the binaural downmix in the production suite, does it still go back on the same 7.1.4. channel (same as not downmixed) and if yes: do you only change between other downmixers and atmos binaural downmix in the control room then?
Sorry for this load of questions, but I am super curious, as it sounds as you found a really good solution to work with atmos in a binaural way and if you want to share, i would be really thankful!
Thanks and best regards,
Jona

All in all, if you want to hear it exactly as your audience will on their AirPod Pro’s, you will need to leverage DAPS or Mastering Suite with Dolby’s binaural encoding.

In addition, you can switch to monitoring the binaural mix on headphones by simply clicking on a button.

You are on the money with my work flow for binaural monitoring! I leverage the control room for a number of plugs. Such as DearVR Monitor and Immerse to name a couple. I bring everything back into Nuendo from DAPS leveraging the both the multiple fold down options & their Binaural Headphone stereo live encoding.

As Shellymoreira pointed out earlier, Max has a great wealth of knowledge and solid tips to also keep an eye on! I stated this earlier but really just love having as many options on the plate to flip between as possible when listening to a mix. Each tool can reveal something different about your mix. They truly really are all unique and as we all know… being tweaked by their makers as time passes.

One thing I want to point to that has began to raise a bit of concern in the community is that it is now questionable the accuracy of apple’s binaural decoder. The question has been raised how they are managing the binaural distance metadata, “if at all”. The current running belief is that they have tweaked this portion of the decode process to either subvert an extra license fee and or to lessen the cpu hit. I am just throwing this out there since it was something I read recently and felt it worth sharing with the community. Over the last few days, Apple has rolled out their “Spatial Audio supported by Dolby Atmos” feature in a new version of iOS and on their Apple Music platform. In this article, Reid Caulfield, takes a look at what we think we know so far, how this...

Have fun everyone and enjoy the weekend ahead!

thanks for your feedback! I will get a copy of the production suite soon and play around a bit. Regarding the thing with apple music:
I did some testing with collegues of mine and the apple music binaural atmos sounded very different to the tidal one. I checked the article you posted, but I can not imagine that they phase-cancel.
I did some research last year, because apple had already introduced their binaural Dolby Atmos for apple TV and Disney Plus (only with the AirPods Pro though). It is my believe that now we listen to the exact same binaural decoding than with the atmos movies. The downside is, that apple is using something that is technically working like DearVR Monitor (I think); a virtual room, that is probably just in ambisonics format, in which virtually the 5.1.4 Atmos file is played back. I think they did it this way because of licenses, but also because of the head tracking that is not possible with atmos itself yet. As apple equipped all their newer headphones with headtrackers, I think it was a crucial feature to them, so they created this virtual room, in which headtracking is possible, listening to the virtualised 5.1.4 mix of atmos, in which the binaural metadata from dolby is lost completely.
I guess, that with apple music, they just kept on with this format, probably also for licensing reasons. But as they said, they will introduce head tracking for apple music later this year, so I think all of this is still playing a role too.
The crazy thing is really, that for us as producers of the content there is really no way to easily monitor how the mixes will sound on apple music…

Thanks so much for sharing the binaural monitoring workflow.
If it isn’t too much to ask, and if it doesn’t go against the forum rules, would you kindly share a template for a 7.1.4 binaural monitoring and workflow?
I would definitely appreciate that and so do others.

Hi there Miguel,
Unfortunately me sending over any kinda template that I am currently using probably wouldn’t be all too helpful. Reason be it is that we all probably have some pretty unique setups given our hardware, software/plugin’s & OS’s. My best recommendation would be to try some of the step by steps both in the forums and also presented by Michael G Wagner on YouTube. He has a real smooth approach with how he presents. Plus most of what he tends to show does not require much extra from what can be done directly in the Nuendo alone. As always though, we are all here to try our best to answer each other’s questions. So definitely no offense taken & ALL questions are worth asking when learning something new.