I know there will be some reactions like ‘why the heck would you try this’. So humor me, I just want to help a good client out.

I’ve finished a 5.1 mix for a film in Nuendo 11 and have watched it back in my properly calibrated room. All good on that end.

The client would love to be able to also watch it through his home theater setup, which is a 65" TV with Sonos surround speakers, connected to Windows computer via HDMI. I’ve tried to piece together as many of the specs as possible, but haven’t seen the system myself.

As far as I’ve pieced it together, if he has a recent version of Win10 (including Windows Creator features) he can download the Atmos app and enable spatial sound on the computer. With that enabled VLC would be able to playback the film in VLC and send Dolby Atmos to the AVR which then decodes it properly.

That leaves me with creating a playable file out of Nuendo. I can’t use my traditional 5.1 mix for that, but could create new Dolby Atmos project and likely just import the stems from my mix as three beds and then render that. But that only gives me an ADM file, he may actually need it in a rendered format. In another thread just earlier here in this forum there was discussion about possibly using the Dolby Production Suite to make that transcode/render.

I see that it can be purchased for $299 of the Avid site (and possibly other places), But only runs on a Mac. My Nuendo system in Win10, but I have Macs as well where I could run the Dolby tools (need an extra iLok for that).

This is becoming quite the endeavor. If feasibly I’d like to make the client happy, but that’s a lot of moving pieces. Learning some about Dolby Atmos in the process, which will be valuable down the road. Ultimately the film will go to festivals and distribution which can just use my original 5.1 mix as always. So this is just a detour for some additional viewing experiences.

Thanks for any tips or face palms.

Sadly it seems like Dolby just refuses to make a Windows version for whatever reason. I think that you can do it with their Dolby Atmos Mastering Suite which runs on Windows. That is the standalone encoder that you can connect your DAW to with OSC. But it is $1000.

The only other option I’m aware of is AWS. I guess you can pay big daddy Amazon to encode it for you here: Using Dolby Atmos encoding with AWS Elemental MediaConvert - MediaConvert (amazon.com) Not sure how much it costs but it does appear to output E-AC3 which is what you need.

I really wish Dolby wouldn’t be such jerks about this, but right now it seems like you have to have a Mac, and have to spend $300, just to get the encoder.

@Sycraft-w AWS Media Convert is an interesting option I didn’t consider. I do use other AWS services frequently, so it wouldn’t a big lift.

A quick check says encoding an 80min feature, 4K & Dolby Audio would cost about $8. There may be some other egress charges, etc. But definitely less than $20-$30, which is a lot cheaper than the tools for a one-off.

@Sycraft-w Thanks again for this tip. I just ran a quick test on a 10min file found it rather straight forward. That seems to be definitely a viable solution especially for the occasional use.

I rendered the .mp4 file and then the ADM master out of Nuendo. Uploaded both to AWS storage and configured a Media Convert job, then ran the job and downloaded the file. The first time around there is some extra permissions to setup, but after that it’s less than 10 clicks to run the job.

Here’s the media info of the resulting file:

And this YT video actually explains the otherwise rather daunting options of MediaConvert quite well. 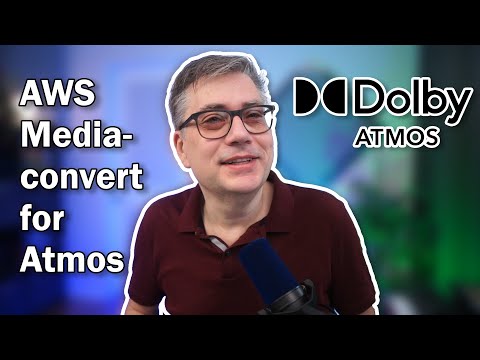 And the last piece of the puzzle. You don’t have to worry about all the complications of playing this via a computer and HDMI. Simply copy the MP4 file with the Dolby Atmos audio onto USB drive, plug that into the smart TV and play the film. Sometimes it’s so simple, you can see the tree in the forest.

@allklier Glad it worked for you. Hopefully Dolby will back off some day and let Steinberg add export for E-AC3 straight in to Nuendo but I’m glad that worked for you for the time being.