Idea for the playback of solo/gli altri -divisi

I have an idea or suggestion for the add divisi -dialog:

It would be useful, if in the divisi pop-up one could select the voice of the staff and if the staff belongs to a section or a solo player. At the moment it’s a bit complicated to assign playback for these kind of situations, for two reasons:

Here is an idea of how this could be realized: 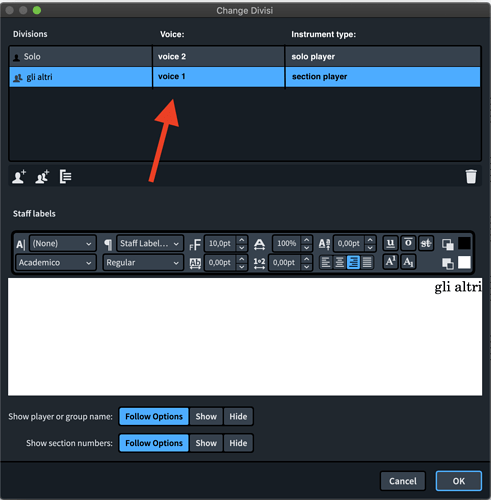 Of course I understand that it might not be technically as straightforward as it looks… I just wanted to share my idea in the hope that it could be somehow useful. I think it would be very nice if the string divisions could be set to automatically play back correctly.

I agree with your point and imagine that when someone uses divisi for dividing a section into smaller sections one would have the flexibility to avoid being forced to use a solo sound for one of the voices.

I wonder if when creating a divisi, both staves could be assigned new voices for the user to configure as desired. I am guessing one can already do that, if desired, by adding a new downstem or upstem voice to either staff to assign sounds as wished.

Certainly in the future we intend to handle playback of divisi sections in a more semantic fashion, but I don’t think we will complicate the divisi change dialog with playback details.

Perhaps the best appraoch would be for divisi to add an implied playing technique as appropriate (half section, third, quarter, etc) that expression maps could then implement.