Include a revision wildcard in file name

Hi
I use Dorico in my work as a copyist, mainly working with musicals and other collections of songs/numbers. A big part of my work is making revisions of a score, often only on single flows. This is always a very precarious process, meaning that the sligthest error can be very critical!
I wish that it would be possible to have a tag named “Revision” in each flow, and that the tag could be automatically transferred to the Flow name tag, when this eventually will be implemented!
Regards Stig

Well Dorico does not internally support the notion of revisions in the way that, say, Wordpress does for pages. You’d be best off to use a specialised tool to manage revisions of the Dorico project, which is just a zip file, and so you can use git which is good for binary objects, not just text. Git is available for Windows and Mac although it came from Linux. Universally used in software development.

The workflow is, save your project at a checkpoint, close it, git commit it with a comment, and reopen and carry on. It’s not very onerous and sure makes things a lot simpler and more consistent than having multiple backup copies in the file system. Git of course allows you to revert to any commit, saving you from any worry about messing up. If you mess up big time as much as I do a workflow something like this is essential.

But anyway, you can set Dorico to save up to 99 backup copies in the preferences and a backup is made every time you save. So you can always revert back up to 99 saves ago. A very good safety net.

@Musicmind
I’m trying to understand where this tag would appear: in Flow Exports? In printing a single flow? In the name of an overall project file that one saves? In a flow footer?

The Revision tag should be used where ever it is suited. The developpers have been kind of saying, that they are working on a solution that will allow to save separate flows as files and print single flows to PDF WITH the flow titel in the name, well that was my impression anyway. This will allow to substitute a single flow - a song in a musical - with a revised file and PDF, and in this situation it would be very nice to have a Revision tag included in the titel. The revision tag could also be a part of the subtitle and so on. I already use the Work number tag in this scenario, but I have to do it manually.

Hi
This could be useful, but I would love to a smart solution build into Dorico, wouldn’t you?

Are you thinking the revision tag would activate automatically when you changed a flow or be something you entered (with a datestamp?) yourself?

Would such a revision datestamp be gleaned form the Project Info fields for the flow in question?

I usually commandeer an unused field in the Project Info to enter a datestamp into the running footer of my custom layout set Page Templates.

I was able to get this far as to finessing the PDF import name by rejiggering the print-name formula, but no luck on the flow exprt.

No not automatically. I’m all for doing it my self, but if Dorico could export, say all 10 flows from a musical as separate PDF’s then it would be much easier to import them to ex. Forscore. And in this context it would be useful to have a revision tag, that could go along with the name!
So in the case where you select Flows in the export PDF, you could the flow title and a revison tag as a token, I think they are called!

I go through the Print Mode to produce my PDF files, and I can configure the name formula in Edit Preferences to produce the PDF name I had above. I hope that might get you at least partway there until a simpler method comes at some point. 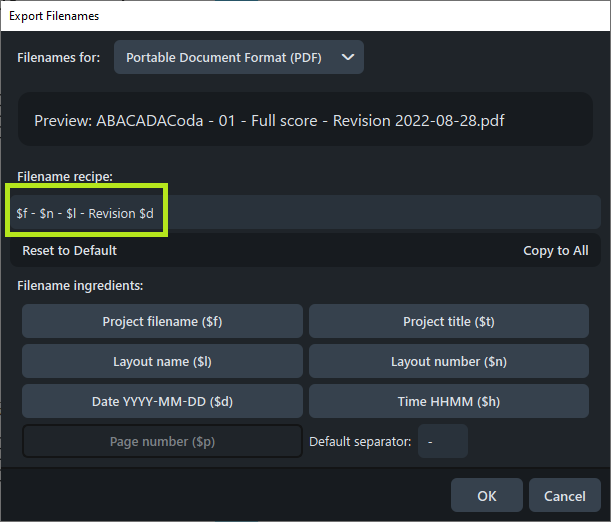 Hi
Thank you for your answer. I don’t think it’s a solution, because the revision tag is locked to the date, meaning that if I print the PDF for some instruments at a later time, the revision is changed - not so good. But thank you anyway!

Would you be exporting the same layouts at different times though? ie wouldn’t you export a layout on “this date” and if you need it again just use the PDF you’ve already exported? Or do you specifically need export the exact same layout on different days?

I usually add a modified date to the page footer in the format yymmdd so I (and anyone else) can keep track of the version on every page (unless they get separated).

Yes, because I often need to export specific flows and not ALL flows. I know this kind of collides with the whole Dorico concept of having all flows in the same file.
If you take a musical with 20 songs. Then some of the songs doesn’t need any revisions, so they stay on revision 1/version1. Other songs/flows are revised several times and they need new revision numbers/version numbers every time, so musicians know which to keep and which to throw out.
So in the same file I have flows with different revison/version numbers AND a change log, with all the changes.
That’s why I need to be able to print single flows - it’s possible already, although not with automatic flow titles - AND a revision tag, extracted from the Project page, specific for each flow.

in the format yymmdd

As another temporary solution, have you considered just duplicating a flow when you need a new revision?

Not sure if it’s helpful sharing my workflow, but since the late 90s any work I do for a client, I append a “V number” in the file name. All the work I do in the file before sending it off to proofreaders or the client will be done in “filename V1.” As soon as I get any comments/corrections/revisions I immediately save it as “filename V2” and do the work in that file. If that’s not the final version, then after sending it off, any modifications will be in “filename V3,” and so on. As the “V number” will automatically be contained in the name of the file or exported PDF, there’s no confusion about which version is being referenced. Dorico files are small, so I don’t really care what the V count gets up to. The point is any Dorico file and exported pdf will have matching V numbers, and any work done in a file that has passed a proofing stage gets a new V number. If a composer changes their mind, there’s no issue referencing a previous version as I save them all.

The ability to create and save revisions (i.e., you can internally store the history of the development of a piece) is one of the few features I miss from Sibelius.

When I want to save a version I just move and rename one of the automatic backup files. (Note: different from autosave.) Dorico files tend to be much bigger, with more playback config info and a preview PDF saved inside the document. I like having versions as separate files better.

I assigned the key command control S to save as new version. They are conveniently automatically numbered.

I’m doing something similar - and your point about space is taken. That said, there are two things that Sibelius does that I miss: