Trying to wrap my head around the difference between editing with INSERT vs editing without it.
Is the following an oversimplification (or actually incorrect)?

Honestly, I don’t understand your statements. Insert mode works like in any document app (including this forum). Enter something somewhere with insert mode on, and subsequent material of the same voice will move accordingly. That’s the tricky part : anything that is not belonging to that voice will not move (nor will be deleted). I’m thinking tempo markings, dynamics, etc…
Could you be less general in your question if you want an accurate answer?

I added a description of Insert mode on its own in the most recent version of the manual, that might be helpful.

Thanks, Marc and Lillie.

Marc, I’m trying to formulate a general summary of the differences between the two modes, so that I’ll better remember them – but I appreciate your input.

Lillie, I like your new description – it corresponds to the Insert / non-Insert behaviour that I’ve been observing. However, I hadn’t considered the differences re. changing a time signature – I’ll have to experiment with that, to see it in action. 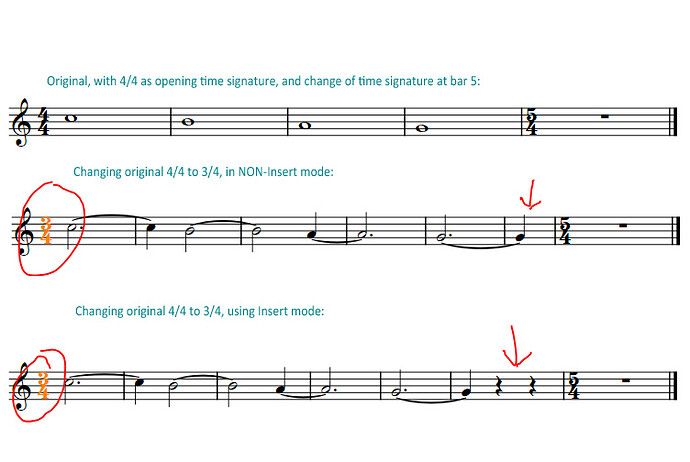 Is this behaviour particular to this kind of time signature change, or are there many other scenarios to which this Insert/non-Insert behaviour applies (apart, that is, from its routine function of editing notes)?

Perhaps it might be useful to read this entry about rhythmic position, as a way of understanding how Dorico approaches where/when items exist.

A time signature in the middle of the flow exists at a fixed rhythmic position, so changing a prior time signature without Insert mode won’t add any extra rhythmic time (beats) before that later time signature. Off the top of my head I can’t think of other things that affect how much rhythmic time exists that would therefore be affected by Insert mode, beyond the stuff described in the manual entry about Insert mode. (Sometimes, despite having written parts of the manual, it’s hard to keep all the information I had in mind at the time of writing to hand infinitely afterwards.)

Thanks, Lillie – that’s a good article. Also quite profound in its implications. For example, if “items” as well as notes are attached to beat-determined rhythmic positions (rather than bars), it might mean that “items” like dynamics – which one would think of as being attached to notes first of all – may not ‘move’ along with the notes that are being displaced by an Insert edit. . . I’ll have to check that out.

Thanks for your tips re. what happens to voices that are not being edited via Insert. Just to clarify: do you mean “voice” as in ‘multiple voices per staff’, or in the more general sense of ‘instruments performing within a given passage’?

“Voice” in the context of Dorico quite specifically means the voice that notes are in - e.g. up-stem voice 1, down-stem voice 1 etc.

. . . and it seems that subsequent material in even the same voice doesn’t move with the Insert changes: a dynamic attached to a note does not move with that note. As Lillie explained, that’s because the dynamic is attached to a rhythmic position, not a note. Makes sense, but – at this moment – it seems counter-intuitive to me. In Finale, “expressions” are always attached to notes.

Dorico is not obligated to ape Finale.

(And I say that as a Finale user.)

I wasn’t implying that. I was explaining why non-note-attached dynamics seem counter-intuitive to me.

It’s possible to add voice-specific dynamics, either by holding Alt while clicking the dynamic in the right panel, or by confirming the Shift-D popover with Alt-Enter rather than Enter, and these dynamics will move with their voice, within Insert mode.

Thanks, pianoleo! Good to know

Just been experimenting with this, and - as you’ve shown - adding the Alt does attach the dynamics to the note rather than the rhythmic grid, and I see that this also affects dynamic changes (cresc/decresc) as well.

However, using Alt this way doesn’t have any effect on my tempo changes, which remain attached to the rhythmic grid. Is this correct?

Thanks for the reminder re. “voice-specific” – which, as you guessed, I was interpreting as “note-attached”. (which voice-specific still is, but in relation to only the one voice.)