I haven’t seen mention of this, and have had no luck trying solutions on my own, but…

Is there a way to insert a cue while in a part?

For example, adding an oboe cue to a flute part, while in the flute part layout?

This would be a nice option, if it’s not already available.
Often I find that I don’t really see where I need to insert cues unless I’m actually looking at the part itself. In the score it’s harder to gauge where the cues go.

Have you tried shift-U then start writing the cued instrument’s name?

There’s also a “suggest cues” feature, which can help highlight useful places for cues in the score.

Cue suggestions are places in the current flow that Dorico Pro has identified as useful locations to input cues, based on a set span of time during which players have not played.

yes., that’s normally how I enter cues. except when I type an instrument to insert as a cue, nothing is available in the drop down list.

normally, for example, if I type “cla…” it will automatically suggest “Clarinette en Sib” and Clarinette basse en SiB".
bu when I do this from within a single instrument layout (like the 1st flute part, for example), no choices pop up when I start to type an instrument name.

It works fine from the score. But apparently if the instrument I want to use as a cue generator is not also present in the part layout it won’t suggest that instrument.

I generally prefer to really select my cues myself, because I will often create a cue that involves multiple instruments carrying a melodic line forward (for example, starting in clarinet 1, then oboe 2, then violins, then back to kazoo or whatever).

Primarily I suggested this feature because it highlights entries in any part in the score, before which the player is resting for more than the number of seconds you’ve specified. Helpful in picking up in the full score, where you can quickly look around for “who’s playing something prominent”, gaps that might be nice to put cues into.

honestly this is a really great feature!!!

Did you try to restart Dorico? It should as well work from parts, but I also find that sometimes this bug creeps in…

I’ve restarted Dorico MANY times… I’ve been working on parts for an orchestral work for the last few months, so lots of opportunities to restart the program (as in, every day).

I’ve never been able to insert a cue from within a part. So it’s not like it works sporadically. It has simply never worked, so I assumed it was something to do with how Dorico views parts.

It works, but you have to do it from the input caret. If you just select a multibar rest and hit Shift+U no choices appear as you have discovered. If you actually start the input caret in the multibar rest, then cue options appear, and you can move or extend the cue with the standard shortcuts.

Of course, it would certainly be nice to be able to select a bar or bars with rests in a part and have this work the same way it does in the score.

There’s also a “suggest cues” feature, which can help highlight useful places for cues in the score.

I’m sure this is already known, but this feature is pretty buggy when slashes or bar repeats are involved. As of now, I get suggestions like this: 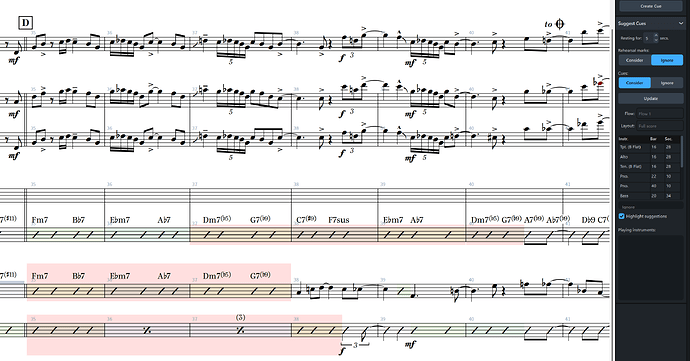 I think it is assuming that the player doesn’t play in slash notation or bar repeats, and suggests cues before an entry with a slash voice or regular notes, but obviously that is in error, as the players in this example have been playing throughout.

AHA! And that solves the mystery!
I was simply selecting the measure. even a measure that isn’t part of a multi-measure rest won’t give instrument choices.
but doing it as you said, by starting the insert caret, works perfectly.
thank-you.