Have I just shot myself in the leg? I registered from the Windows Insider program and so no my system is running 22H2 insider preview. Today I find the harpsc=ichord and piano from Steinerg are no longer licensed. I reinstall the harpsichord to no abvail. The e-licencer shows this: 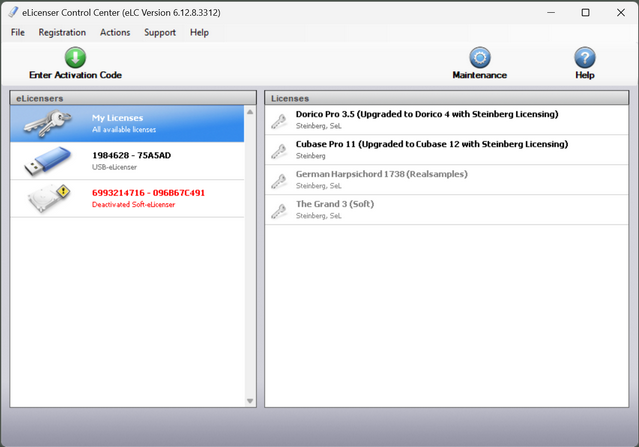 When I attempt to perform the maintenance tasks I just repeatedly get this:

Then when attempting to run as adminstrator whch it asks you to do then you choose Repair the e-licencer is basically cactus - all blank screens, no data shown.

I think its going to be hard to revert to the non-insider program, although I dont know, but neither do i want to.

Hard to see how 22H2 could break the e-licencer so badly, and it so, everybody is in for it when 22H2 comes out a little later on. I suspect something else bad has happened, although I do not recall doing anything that would stimulate any change.

On no! Is it possible to go back via a Restore point?

Well, unscientific though it may be, I downloaded and reinstalled the same latest version of the e-licenser and now it see all the devices and licences. And seems to work. But only after rebooting, a couple of times (weird). [Very weird.]

So, although apparently solved, if this issue is Windows 22H2 related, others will find this topic.

Phew. Also, unscientific though it may be, when I encounter seemingly unresolvable snags, I throw the computer out of the window, wait a couple of hours, then try again.

“Insider previews” are Betas. You should expect problems.

Should you encounter this problem again, I would advise simply running eLicenser Control Center as administrator, then allow eLCC to perform its default maintenance tasks, and that should put things right.

@dspreadbury As I mentioned but perhaps did not emphasise running it as Administrator was even worse - just a blank screen and no ability to do anything, consistent behaviour.

@benwiggy You are perfectly correct. It’s my dumb fault. I stupidly thought I’d see Windows problems, not application specific. Very stupid. Anyway, for now I’d advise people with Dorico not to go on the Insider Program. This is the punishment for impatience.

I don’t think this is anything to do with the Windows Insider programme. It’s a known issue that occasionally on major system updates, the permissions for the soft-elicenser get reset, and so ELCC has to be run as administrator to reset it. In the longer term, our new licensing system doesn’t have this problem, though we need to keep the eLicenser for compatibility for some time.

@PaulWalmsley thanks. But under Administrator on my current build of Windows 11 22H2 Insider it won’t even run. Complete reinstall was the only fix. Perhaps a new install was happier on 22H2 Insider. Can’t imagine why.

Purely out of interest, roughly speaking, what is the big holdup with moving Steinberg VST instruments to the same dongle free system as Dorico and Cubase? Cubase forum users also ask the same question. I’m curious.

It might be that the ELCC installer performs some fixup steps – I don’t know exactly how it’s configured.
The difficulty with migrating existing VST instruments over from the dongle to the new system is that there are hundreds of different instruments and content sets, and each one needs custom configuration to migrate user licenses.

each one needs custom configuration to migrate user licenses.