I’m using Noteperformer and monitoring the output level with Youlean Loudness Meter 2 and VSL Loudness Meter Pro. Both are saying around that the audio is around -14 LUFS when I’m playing back the score in realtime. When I export the file from Dorico (mp3 and wav) and drag it back into Youlean to check the audio level, it says -17 LUFS. When I check the audio level in Studio One, it also says -17 LUFS. The Dorico audio level is getting reduced somewhere. I didn’t have this problem in earlier versions. Anyone experienced this?

Suspicious that that is exactly 3dB. I have the Youlean Pro loudness meter, and NotePerformer. Let me see if I can reproduce your observation. These 3dB differences always have some subtle explanation but usually soluble.

Amusingly @gyprock , Gyprock is a famous brand of plasterboard for building here in Australia, named after the mineral gypsum !

I’m from Australia and Gyprock was the name of our cat of 17 years. We got him as a kitten while we were in the midst of renovating an old terrace house. We had an old aussie carpenter that was regularly heard calling out “Gyprock” each afternoon as he was trying to get the cat into the house. Naturally all the neighbours thought he was a bit mad.

G’day mate! I thought your moniker may have been Gypsy Rock!

Some progress. I used the Steinberg Test Generator in Cubase to make a signal at -14dB, I know dB is not the same as LUFS, but nonetheless. Then recorded this to a track and ran Youlean over it, which reports a level of -17dB. That’s exactly 3dB lower - as I suspected, this some sort of AES standards difference or similar.

More - this is almost sure to be due to the Stereo Pan Law. I started a topic here asking about this on the Cubase forum just a short time ago. The default pan law lowers the centre position on a stereo track by 3dB. To do these tests etc you have to set the centre reduction to 0dB. There’s a whole heap of theory behind this. I’ll get my thoughts properly ordered and report back.

But I don’t recall seeing any settings for stereo pan laws in Dorico. Hmm.

Have done some tests with Dorico, inconclusive. Making a Dorico track with a given LUFS average, exporting it, and analyzing it in standalone Youlean gives quite different LUFS figures, generally lower in the standalone application. Not a neat 3dB difference either. Youlean has a lot of different standards you can use. But there is something going on with Dorico export audio parameters that does not seem to be accessible. May be time for Steinberg to chime in.

I’m not aware that we did anything in term of audio export, but maybe they did something on Cubase side which we silently inherited from there. I need to asks the people of the other team.

So there is some code from Cubase in Dorico? I had the impression for some reason there was no intermingling.

I agree that something is going on with Dorico export parameters. I don’t think it is a standalone Youlean issue because its levels are consistent with output from Studio One. I didn’t try Cubase 12 yet. Basically I added some gain in Studio One to the Dorico file to bring it to -14 LUFS. I then tested this in Youlean which correctly reported -14 LUFS as well.

The core of the audio engine was taken straight from the cubase team.

@Romanos I wonder then if the engine is implicitly applying the default Cubase Stereo Pan law of -3dB down at centre pan. Hmm. None of this is visible in Dorico of course.

I asked the Cubase team colleagues and they also don’t know of anything.
And I made an own test, created a very simple project in D3.5, exported it, then took that project to D4 and also exported. Both exported WAV files I drew into Cubase and applied the Statistics tool. The result see yourself:

Where in your signal chain are you measuring the loudness in real-time, @gyprock ? If it’s in the master section of the Dorico Mixer, what Level is your Master fader on?

More work from me on this. I made a test project consisting of a long drone of tied semibreves, and then added Padshop from Steinberg to produce a constant but slightly fluctuating sound. I adjusted mixer levels until I achieved about -21 LUFS according to YouLean Pro on the track (I don’t think you can put it anywhere else? Then I exported the audio as WAV and loaded it into Youlean Pro standalone app for analysis. The app reported an integrated LUFS of =20.7 LUFS - close enough to the same. So now I do not think there is a problem.

I may run some more tests on more realistic music.

@gyprock are you by any chance working on mastering at -14 LUFS as a lot of people do? There’s a well written article here about this, out of interest. This came to my mind as -14 LUFS is a common thing. 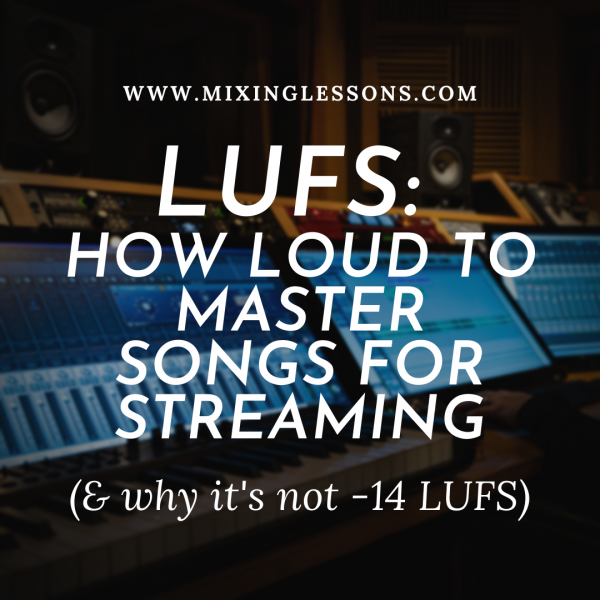 LUFS: How loud to master songs for streaming (& why it's not -14 LUFS)

I think the easiest test is to have a file with a known Loudness, wrap it into a video, import it and put a loudness Meter on the output.
I am on the road, so I cannot do it, but that would definitely show weather Dorico is changing the levels in any way here.

@klafkid Yes, my master fader was not on 0db. So the issue has gone away. The confusion arose because the inserts on the master fader appear to be all pre-fader and the Dorico audio is recorded post-fader. Oh well, lesson learnt. Thanks everyone for your contributions. I won’t be making this mistake again! @Andro Thanks for the link on mastering. It was very interesting

The confusion arose because the inserts on the master fader appear to be all pre-fader and the Dorico audio is recorded post-fader.

That’s common for any DAW. How else would you be able to compensate for level effects master inserts might have?