Is it even worth installing the C12 Update?

I bought the c12 Pro update shortly after was released but held back from installing it because I was waiting for the Maschine 2 update that was set to be released to move it to VST3.

I haven’t installed the update yet as the Maschine update has been delayed. Given all the negativity from users about the C12 installation problems I’m wondering if I should I wait for a C12 maintenance release?

But rather than concentrate on the negatives, are there any good positives that we can glean from c12 to make it worthwhile negotiating the installation minefield?

For example will the MIDI Remote facility improve the operation of my Q-Con Pro X console?

I like the look of the audio to MIDI function … any good?

What about Raiser? How does that compare to the IK Stealth Limiter?

Verve - Any significant improvement compared to other Halion keyboard instruments?

What else should I be getting excited about?

If you bought the license already, there is no reason to don’t install it. You can test it out on your specific system and find out, what do you like by yourself.

Here you can find the description of all news in the version.

Hi @Martin.Jirsak Thanks for that - As a Cubase fanboy for 15 years or more this is probably the worst feedback on a new release I have come across. I’d love to give the new features a run out, but my biggest concern is the possibility of corruption of C11 which is currently working fine for me.

It seem that there are many users that haven’t come across installation issues, and my setup is a pretty standard Win10 / i7 32Gb rig so I’m hoping for no problems … just looking for a bit of reassurance

I would have dived straight in, but I’m pretty much wedded to NI and Maschine in particular, so that would be one major VST (fior me) that I couldn’t use from the get go.

but my biggest concern is the possibility of corruption of C11 which is currently working fine for me.

After reading of at least a few people who had their access to C11 compromised after going for C12, i have decided to hold off on installing C12.

I would guess the vast majority of users don’t have that issue, but I guess I’m happy enough with C11 that i can wait till the first C12 released revision has been tested by the user base.

@vinark - My bad on that one - I understood that C12 was vst3 only? So Maschine 2 should be still okay?

What you don’t read is the silent majority who are using it just fine.

I’ve not had any major issues, and if I did I would just run Cubase 11 - which will sit just fine after C12 is installed.

In regards to positives, the MIDI Remote is great and i’ve already made plenty of use of the audio to chord track feature - it’s brilliant if playing guitar on a capo (which I do a lot) - as it transcribes what’s been played which really helps playing bass or working out other melodies afterwards.

The only negatives I’ve experienced is a slight pause in the application - not sure what it is, but i get the egg timer for a few seconds when closing a window library,. Seen that 4-5 times now, which is still quite rare - but I’m aware it’s there.

I haven’t really used much of the other features, as just been enjoying the hands on control with the MIDI Remote and making music!

This is good news - some positive vibes coming forward … I like it!

Nearing the end of a mixing project, so looks like once this is done I need to dive in after all

Can anyone confirm Maschine 2 vst2 is working in C12 ?

My bad on that one - I understood that C12 was vst3 only? So Maschine 2 should be still okay?

VST 2 is not supported on M1 Macs only.

What you don’t read is the silent majority who are using it just fine.

In a forum, the silent majority should be remembered. Unless you desire DAW ideas, work-arounds, or basic Cubase learning, the majority of Cubase users I know of “just do it” and rarely participate in forums Nor do they collect tools based on diminishing prices, or even keep up with the very latest version. It’s a race to the bottom, and Plug-In-Alliance has in essence joined Waves.

I too would like to know about any MIDI remote improvements that improve MCU protocol. There is a hack mentioned in a separate thread here about MCU auto-bank issue.

Unfortunately, forum complaints, just like all social media, need to be seriously filtered by the reader.

I don’t know what the percentages are, but numerous complaints are

And of course, there are real bugs, too - and not yet implemented features in a given release. Steinberg is not different than other software developers in publishing first releases that don’t yet include all of the features planned for a major version. Some, but not all of those are mentioned in the release notes. That habit makes things more complicated for customers, but seems to be part and parcel of buying software these days. Early adopter purchasers are effectively pre-paying to a degree in the hope/trust that the software developer will come through.

So I find, that it takes quite a bit of effort to correlate forum complaints with what might overlap with my own situation. And even then, it’s easy to get a wrong impression.

However so far, I’ve generally found that Cubase seems relatively well behaved in running older and newer versions side by side. I’ve opened some projects back and forth between Cubase 11 and Cubase 12 without any obvious problems.

But to reiterate, as mentioned above:

I have a video on how to do this and link them together which can be useful: 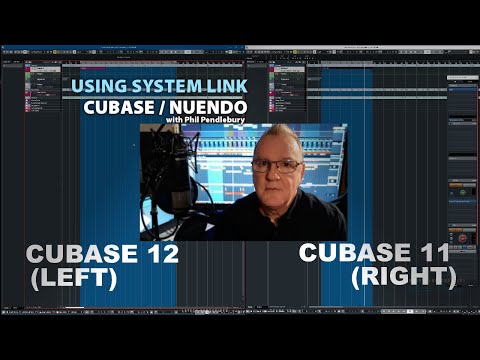 I have a video on how to do this and link them together which can be useful:

brilliant - thanks for that!

Thanks to everyone for the v.useful feedback. Especially confirmation about vst2. Watch this space for my own take on how the upgrade went for me …

I once even accidentally opened 11 and 12 at the same time (possible with multi-client ASIO like RME). But in Win10 things got a bit weird in window management between the 2 instances of Cubase, so I very quickly stopped that inadvertent experiment.

I do this fairly frequently as it allows you to have 2 different Projects Active at the same time. Once I even made a copy of the Cubase.exe file named it Cubase2.exe and they both ran fine in parallel.

To the OP - to minimize any risk make sure to backup your system disk the night before upgrading and also just before you do the install have Windows create a Restore Point. That way even if things go horribly wrong you can always get back to where you started.

Here’s how I look at this: With Cubase being the centerpiece of my studio, sooner or later I’m going to want to upgrade to C12 to take advantage of its new features, and to stay within the window of supported software releases. So, the sooner I can try it out, the sooner I will find out what particular bugs/issues I may encounter in my usage context, and the sooner I can let Steinberg know about it so it gets into their backlog to get fixed.

Like with any mission-critical software, you’re going to want to install it on a dedicated machine that’s not used for any production purposes, and keep your current setup until that new C12 machine has been proven to work well, and then, and only then, switch over.

There’s nothing stopping you using C11 if you install C12.

Wrong. After installing C12, my Nuendo 11 and Cubase 11 went south. Projects I was just working on prior to installing C12 suddenly wouldn’t open. I had to uninstall C12, and then (lucky for me) paste back in my saved default and other settings for N11 and C11. And a few other things like reinstalling the elicenser, etc. before I could once again do my work in C11/N11. C12 was like a virus that almost destroyed my computer. Everything is working fine now.

Wrong. After installing C12, my Nuendo 11 and Cubase 11 went south.

Wrong. After installing C12 my Cubase 11 continued to work exactly the same…

Wrong. After installing C12 my Cubase 11 continued to work exactly the same…