Is my project f**d up ? Cannot select a midi region on one track

(Mac) Cubase 12 Elements.
I just added a Halion 6 track and recorded some notes.
If i click on the region, it does not highlight it.
If i double click on it, the lower pane does not open. It appears that a new region is created superimposed onto the original region. I can even drag it past the region i created. it looks like a new empty region.
I am therefore unable to access the midi window on the lower region.
I re-started cubase and even did a computer restart… and nothing works…
Not sure if trying to copy all my good tracks to a new project will work .
i created a new empty project and laid a halion track… and everything works as it should. So it doesn’t look like the whole application is corrupt.
Before i depress myself and copying all the tracks to another empty project doesn’t work, i would like to know if i can fix what is happening…

Can you post some screenshots showing how you have things setup. Problems like this are almost impossible to diagnose based only on a description.

hi… the first is after i record. The next shot shows what i see after I double click the region… It looks like a cycle record… where there is a new region sitting on top of the my original recording… The next shot is after I dragged the new overlapping region , to the right… There is nothing there…
note
Come to think of it… before that happened, I duplicated the piano track from above and then deleted all the midi. when i played the song, that track was playing something… but that cleared up.
BUT::::::
MAYBE A HINT
THE PROJECT WAS CREATED BY IMPORTING FROM CUBASIS. A SCALER2 TRACK on my iPad, DOES NOT WORK WITH CUBASIS IMPORTING, AND IT CREATED A ‘DUMMY’ TRACK, WHERE I COUDN’T EDIT THE INSTRUMENT (although i also have a scaler VST on my Mac)…
d 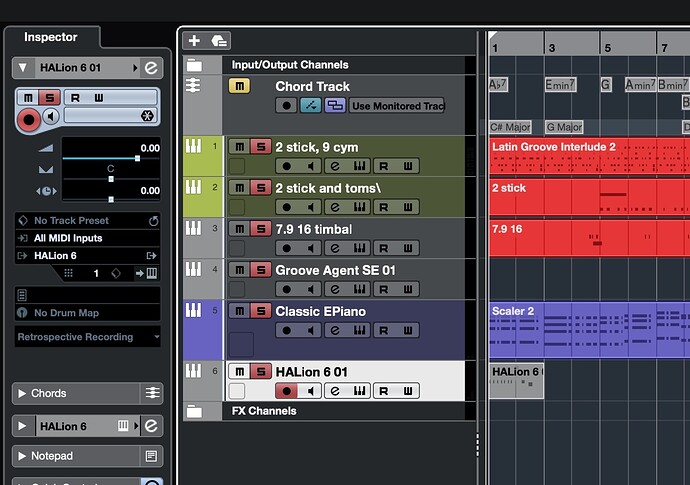 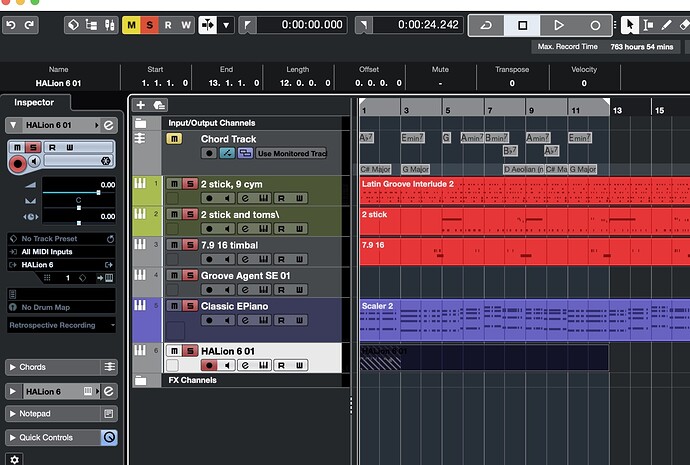 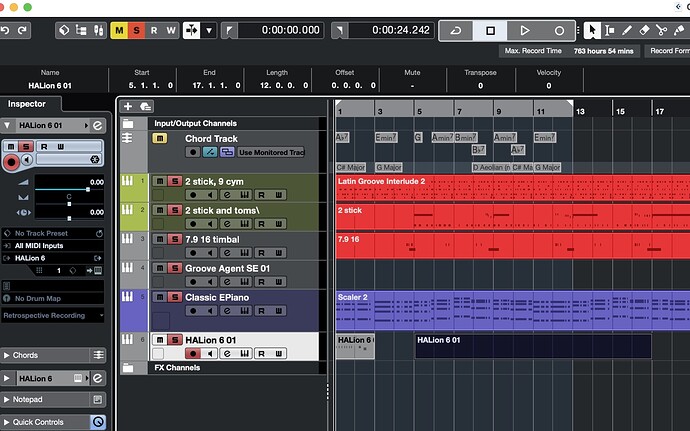 OK… so i held my breath and copied all good tracks to a new project… My new Halion track is working well…
That means that there was a corrupted project
or
IMPORT FROM CUBASIS did something to alter the project.
or
maybe i changed a setting somewhere.
I think its a corruption, as my screen shots show a bizarre situation.
What do you think ?

Keep in mind that unlike some other DAWs the fundamental things you edit in Cubase are MIDI Parts and Audio Events and not Tracks. You’re editing a MIDI Part on a Track and not a section of the Track.

hi !
Well you just taught me a new trick. great since some of my midi recording is done note by note in a new region. i will use your trick from now on
HOWEVER

i AM indeed clicking on a gray region !!! Go friggin figure !!!

i AM indeed clicking on a gray region

That seems odd. First lets make sure we’re talking about the same things. The term ‘region’ in Cubase is some jargon for Audio work that isn’t really applicable to this situation. I’m assuming you are referring to the MIDI Part on Bars 1 & 2 of the Track when you say region. If that’s the case what happens if you just Select the Part and use the MIDI Menu to open it in the Key Editor - does that work as expected?

Also I’m wondering if there are any Preferences that might come into play here. Unfortunately I can’t get to my DAW to take a look for a day or two because of some construction taking place.

yes, when i select (one click) the region, it doesn’t change color (it goes black i think ?) In my case , A double click creates anew empty region over one and two… (and the locators are not between those two tracks…
but as was mentioned (by you ?) about double clicking a blank region… , maybe cubase does not see my recorded region !!! when i double clicked the gray region between bars 1 and 2, cubase thought the track was empty and created a new empty region. which became superimposed over my recorded region… As i said before , this happened after an Import from Cubasis… maybe that did something ?

As i said before , this happened after an Import from Cubasis… maybe that did something ?

also the step2 above should select the part on the track so you can open editors. Maybe it will cure once you open and edit the part and/or move the part boundary in the editor (you can change the size of the part within the editor.).

thanks for that… i can’t seem to find the project now… (i have several versions)… I will look for it and try your steps.