Is there a "default" score order for clarinets?

With the “Orchestral” score order enabled, Dorico 4 sorts some clarinets like this:

This strikes me as a little strange, but I thought it’s best to ask here. I expected to see something like this:

Is Dorico following some convention here? Curious to learn!

It looks as though it goes from high to low… Why is it strange?

Why is it strange?

I always thought Clarinet in A is a twin brother of the B Flat Clarinet and that they would be both
(a) below Piccolo Clarinet and
(b) below the E flat.
Perhaps I’m wrong, so wanted to clarify…

Sorry, I misread your post and thought the second picture was the result…

Your list is correct. Dorico’s is wrong. Don’t know why.

It appears that Dorico’s internal score order machine needs to be further enhanced. Besides, I’m assuming that any instrument can still be dragged to a different location in the list.

Both A and B flat clarinets are aliased as sopranos but for some reason they are very far apart on the list. The e flat is listed as sopranino but the piccolo version of e flat is missing. I recall there was a really informative thread here some time ago once about all of the clarinets.

Perhaps in this case it’s just a matter of moving the first two lines in this segment to sit right below the two entries for the b flat clarinet (with proper backup, etc)? Maybe Daniel could clarify…

It’s definitely wrong regarding the Clarinet in A; it’s labeled as soprano–which is correct–, but putting it over the sopranino/piccolo/Ab. Maybe a detail overlooked because of the apparent note logic (A natural over A flat).

So I guess it follows the xml file in that the sorting is done by letter rather than by group first, family second. And what’s the difference between Clarinet (A) and Soprano Clarinet (A) - just more detail?

There’s really no difference. Both are one and the same, in common usage. The thing is there exists, as far as I know, a very rare type of sopranino also in A–it is listed by Nicholas Shackleton, a famous clarinet collector–, but I’ve never seen one and I know no music that includes one.

I recall there was a really informative thread here some time ago once about all of the clarinets.

From a clarinettist. Small thing maybe but this is the straight scoop on how it really works. I’d drop the D clarinet - don’t encourage composers to use that! Nobody has one, I’ve never heard of it in professional circles, and certainly not amateur. If you use it you’ll just have the clarinets asking you for a transposed part anyhow. Buffet’s cost $8k these days, and they don’t even make one I think, I did a search a while back and there’s only one or two manufacturers. I certainly won’t buy on…

Anyhow as discussed in the thread above there’s a lot of confusion in Dorico about the clarinets.

OK if Wikipedia is correct then the Bb/A are called Sopranos, for the reason they are higher than the basset and alto. But it’s a poor nomenclature maybe as sopranos usually can’t hit a low E

A soprano clarinet is a clarinet that is higher in register than the basset horn or alto clarinet. The unmodified word clarinet usually refers to the B♭ clarinet, which is by far the most common type. The term soprano also applies to the clarinets in A and C, and even the low G clarinet—rare in Western music but popular in the folk music of Turkey—which sounds a whole tone lower than the A. While some writers reserve a separate category of sopranino clarinets for the E♭ and D clarinets, those Us...

But again, don’t write for the C or D clarinets, unless you don’t want your music ever played! Everybody would just transpose, if it’s even possible with the key change.

I’m sorry to disagree with you Dan; I don’t want to create controversy. But the Bb AND the A–just as you said, they are alternates–, both are sopranos. The most common clarinet (the Bb) is a soprano clarinet.
The Eb (and the alternate D) clarinet is a sopranino, not a soprano. The piccolo term, used colloquially, varies form region to region.
BUT… a very big BUT…
I totally agree with everything you wrote both in this last post as in your posts on the referred thread, taking into account the common practice and being practical. What I just wrote is a technical, zero important, clarification.

It’s a historical nomenclature; that’s why it’s not practical. Ha, ha… It has to do more with the relation of the instruments themselves in the family, than the relation with human voices.

And DEFINITELY, completely agree with this request for composers: Please don’t write for the C or D clarinets.

Here’s a very short, useful video showcasing the modern, common clarinets being made today. I say common, but really only the Eb, Bb, A, alto and bass clarinets are common. The other ones are bought by very rich clarinetists or special rare ensambles. 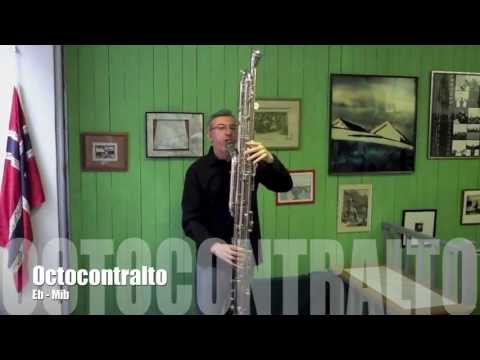 The others aren’t unknown. I played in clarinet ensembles in San Francisco where all sorts of oddities showed up. Major orchestras have libraries too, I didn’t own a professional Eb and borrowed from SF Symph library, they probably have a collection. Hell a Buffet Bb costs $8k these days and as a pro you have to replace every decade or less. The problem is finding them, I’d love a Buffet Basset but would probably have to go to Paris to have a good audition stock.

But there’s no point as I said in the thread above, any clarinettist worth his salt can alter their tone to suit.

Back to the original question: The XML quoted in post #7 is nearly correct in terms of range order. It’s only the two A-Clarinet items that need to move down below the B flat ones.

The A♭ Clarinet is another fourth smaller than the high E♭, so it does belong on top (as nicely demonstrated in that great video which I have enjoyed multiple times before).

Why must clarinets be so complicated? When I last looked they were quartino (Eb), terzino (D), in C, B natural, Bb, A, G, (rare F), Alto Eb, Basso Bb.

Why on earth does a piccolo Bb exist? What happens with the players? Are substitutions allowed mid-concert or should the ball go out of bounds first?

Why must clarinets be so complicated?

It’s a pretty key instrument, the winds are all soloists and the clarinets are the glue. OK I’m biased but I’ve had that drummed into me enough.

I talk about all this in the thread above, it all depends on the ensemble your writing for. Berlin/Chicaco/NY/SF etc have dedicated Eb and Bass clarinets, who also double as third Bb/A. That’s all you have to know, that trio (Bb/A, Bass and Eb) are 99% of what is used in orchestras.

In bands you have Bb’s, Bass and Alto, and occasionally Eb’s. Rarely you’ll see contra but I played in a band once that had one.

That’s about it, like I keep saying C’s, D’s etc are basically non existent in the real world .