I’m trying to get this cross-staff beam 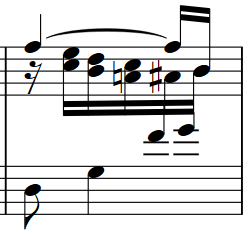 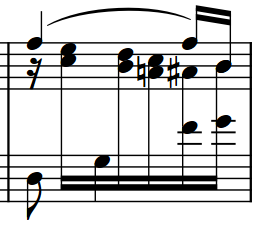 It’s because that would require stems on both sides of the beam, which Dorico doesn’t currently support.

No, Dorico doesn’t currently have the capability to show a single stem at the same rhythmic position on both sides of a centred beam.

Oh, that was fast! Thank you, Lillie. I will try to fake it somehow.

It works with two up-stem crotchets in the left hand: 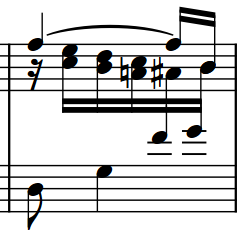 This same excerpt came up some time ago in this thread:

I’m trying to input this bar from an Intermezzo by Brahms. At the third and final eighth of the bar there are two sixteenth two-note chords, which are split between the two staves. I can’t reproduce this in Dorico. The problem seems to lie in the beam being positioned between the two notes and not above or below them. When I chose the two notes and made them cross staff Dorico automatically moved the beam up. I had to go to Engrave Mode and pull it to the middle, but then, as can be seen in the…

My workaround managed to create the visual effect - not an entirely satisfactory solution, but it might do for what you need.

Here is a screen shot: 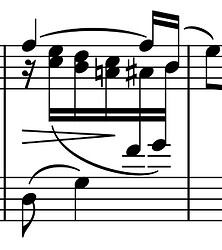 @Juerg_Loeffler 's solution is probably better, and is another way of doing it.

Oh, that very example has been discussed already

But it’s always interesting how there are different approaches for uncommon tasks. Thanks for the hint @stevenjones01