I’m using Dorico on two different machines, and I’ve noticed some strange things going on with one of them, a Surface Pro 3 tablet. I’ve put together a few screenshots to better illustrate my problems - perhaps it’s just a settings issue, but I can’t find any option I could tweak, and none of the other programs I’m using on the Surface are exhibiting this behavior:

When I start Dorico, the menus and buttons/panels are abnormally large. The menu is using a font twice as large as the window title, and the “Fenster” (“Windows”) menu obscures the entire screen when opened. The text buttons (Setup/Write/Engrave) are gigantic, but the font they’re using is so big that the button labels get cut off, at least in the German version (“nrichtur” instead of “Einrichtung”, “iederga” instead of “Wiedergabe” etc.). All in all, the menus/toolbars use up over 60 % of the screen (and that’s without having opened the bottom panel), leaving only a tiny part for editing the actual score: 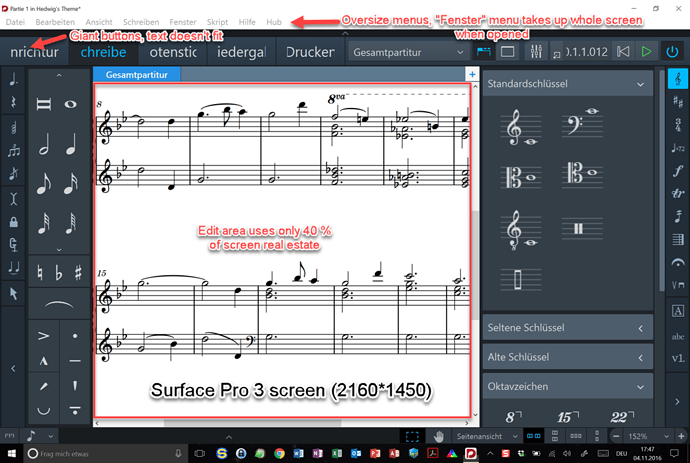 ), the buttons expand to a width that does make them legible (“Notenstich”!), but now the right-side panel has moved largely off-screen. Since there is no scroll bar, it’s not directly possible to bring it back: 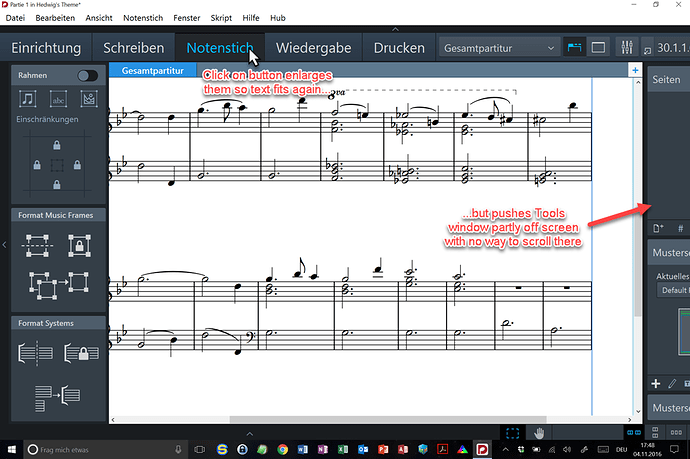 Dorico_Surface (2).png1080×720 193 KB
I can get the panel back by turning the full-screen window into a normal window and back to full screen. But then, the button texts are again cut off.

By comparison, on a normal HD monitor, menu/button sizes are well balanced, and the menus/toolbars/panels only take up 40 % of the screen: 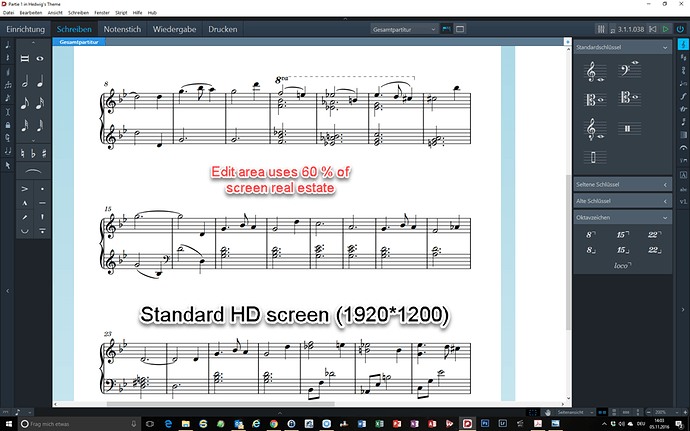 Not a fix, but a workaround- If you set Settings>System>Display set to 125% before launching Dorico the UI sizes more appropriately. After Dorico is running you can switch back to 150% if you like, and Dorico will keep it’s UI scaling for the session.

Thank you for the fix! Hoping friends at Dorico will give us High-DPI people a little love in the next update.

I’m on a dell laptop with 3200 x 1800 screen resolution. You can only imagine how difficult that is after looking at the surface pro 3 (2160x1450) Was hoping Dorico would be more useable than Sibelius, but I have faith in you folks!

I believe when I last ran Dorico on our borrowed Surface Pro 3 I was doing so at a display scaling of 150%, and I didn’t see any of those weirdnesses. We’re not doing anything beyond simply specifying how big we want the UI to be in logical units, and then allowing the OS to decide how many pixels that should be, and we’re doing that on both Windows and macOS. I will try to reproduce this tomorrow when I can put my hands on the Surface and see if I can figure out what’s going wrong.

did you find out anything about scaling issues on the Surface Pro 3? Thanks!

I’m sorry to say that I completely forgot to look into this! However, I have just fired it up and run the application in German and I can see the same problems that you do. I don’t think these problems are intrinsic to the Surface: you would see very similar things running on a 13" MacBook Pro with a Retina Display using its default settings. We’ll need to think about what we can do to improve matters for these kinds of high-density but small screens. I’m afraid there won’t be any improvement in this regard in the forthcoming 1.0.10 update.

That’s OK, the workaround of quickly downscaling before starting Dorico is all right for the time being. Thanks!