For those who are able to host full Kontakt in VEPro, do you have an instance of Kontakt for each instrument or do you load several midi channel’s worth of instruments in a single Kontakt instance? If the latter how do midi channels get mapped?

I’m starting to use Infinite woodwinds and Infinite Brass bit can’t get my head around how this will work. I’m preparing g for when VEPro supports VST3 so not an issue right this minute.

I use VEPro in both situations you describe. For the latter, each VST instance is assigned a MIDI port, e.g., 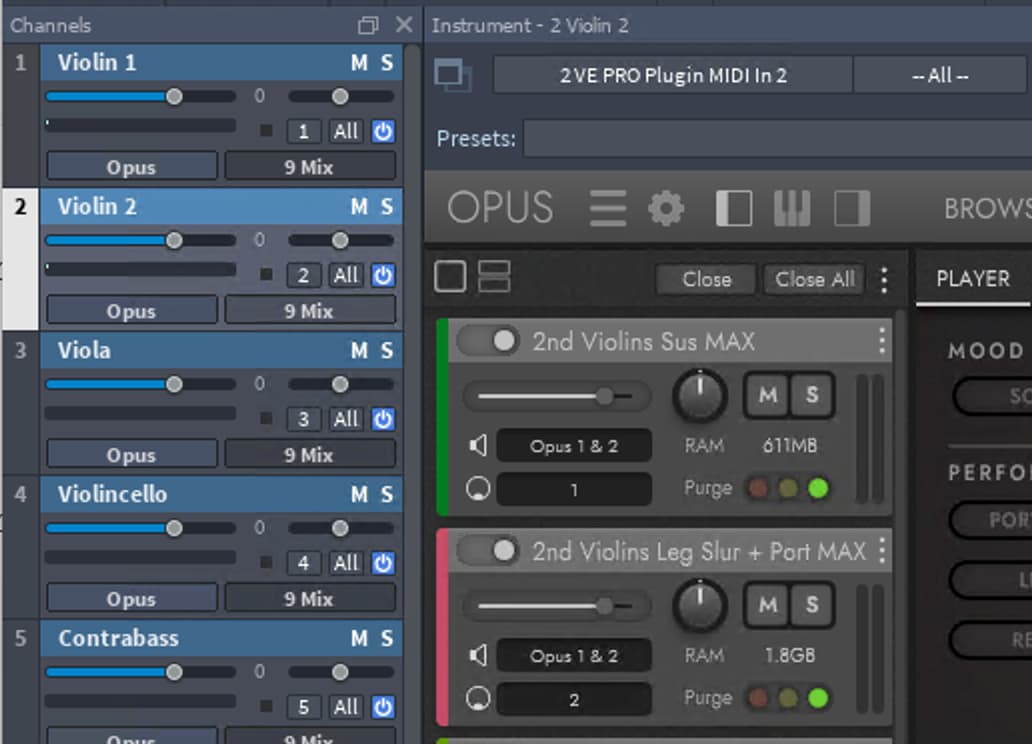 You can see I have multiple instruments for Violin 2 and the instance of Opus is assigned to: 2 VE PRO Plugin MIDI In 2 and set to receive on all channels.

In Dorico, you simply add the VST3 VEPro VST, connect to the VEPro instance and set the routing to the correct port and channel:

Of course, the expression maps need to handle the channel changes based on desired articulation. You also need to make sure that the end point configuration has more than one port enabled:

Thank you @derAbgang . I think I get it. I do something similar to you with Kontakt player when I use Spitfire chamber strings for example. I think it’s 3 or 4 instrument’s worth of patches per string part but I set them all to the same midi channel in Kontakt player but reference whatever VEPro midi channel they’re on in Dorico. But that library has, for example, a core techniques, decorative techniques, legato performance for each string part.

But in the case of infinite libraries it only has 1 Kontakt patch per instrument (single piccolo patch, single flute 1 and so on). It seems like a waste to have a separate Kontakt instance for each instrument but maybe with this library that’s how it has to be done.

You can load up a 16-piece band (separate instruments) into one instance of Kontakt (assuming VEPro MIDI In 1) and in Dorico, just route the channels appropriately, e.g., 2 flute and an alto flute: 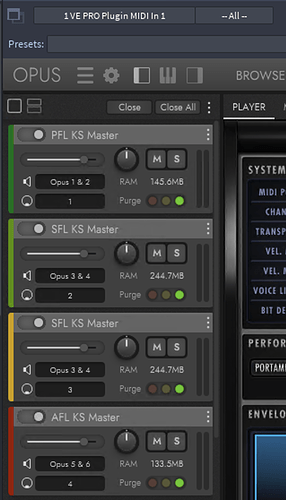 … and the routing in Dorico: 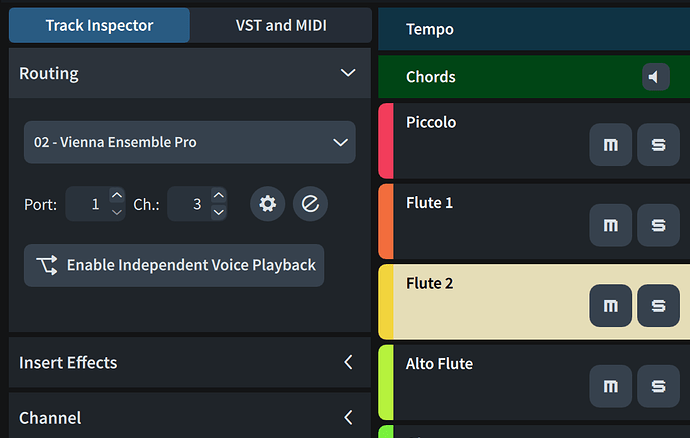 That’s the way the Halion and Noteperformer playback templates function as well.

I use Kontakt in VEP with Dorico. If I were using Kontakt as extensively as I’m using EW Play, I would definitely use a different instance for each instrument.

In Kontakt, I have an instance for all the strings, another with voices. I also use East West Symphonic Orchestra Platinum in the same VEP session. For this, each instrument has its own instance of Play (one for violin 1, another for violin 2, etc). Sometimes, I’ll load additional instruments into a given play instance. For example, EW Violin 2 does not have a pizzicato sound in the keymaster. So I load a pizz sound into channel 2 of the Play Violin 2 instance.

I hope this provides some ideas. BTW, there seem to be quirks in how VEP is handled by the Dorico mixer. I haven’t entirely figured it out. My work around is never to touch the mixer but to make adjustments in the Key Editor.

Yeah the routing is another matter, although I’m more or less resigned to not worry about Dorico’s mixer and mix inside VEPro only. I also use MIR 3D and can host a limiter in the master out of VEP.

I think I follow what you both are saying but I think I’ll have to wait (hopefully not too long) until VEP can host Kontakt 7 to experiment.

Thank you for sharing your setup ideas.