Losing bus settings and all VST connections, WHY?

I am using Cubase 5.1.1 Essentials, RME Babyface, and Superior Drummer 2.0 on a Macbook Pro.

Everything has been fine until this week. I went to open up the project I’ve been working on and all kinds of crap was different. Under VST Connection the inputs defaulted to Stereo and were no longer set to mono and when the project opened a box popped up saying “Missing Ports”. I have attached some screen shots of it to this post since I don’t know how to explain it. All my previous EQ’s, inserts, etc. are lost. I then re did everything in a VST instrument channel instead of a VST instrument track. Not only did I lose all that hard work, but all the audio channels in my project were not set to any busses so I had to go redo everything which is very tedious. Worked on it a few times the past few days always saving. I went to open the project and it happened again! I have not changed anything, this just seems to happen at random.

I tried opening other projects and they are fine, but none of them had drums that were set to multi-channel. 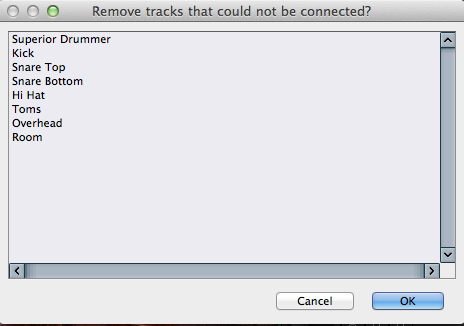 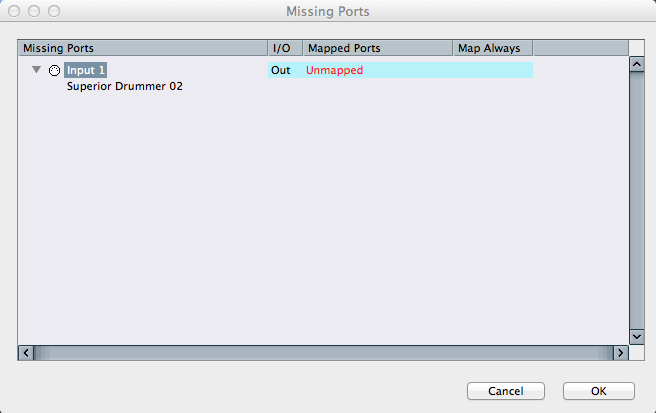 Made 1 small advance in this debacle. I made a preset VST connection. When ever I would open Cubase it would go to default connection settings. Then I would open the 1 project I’m having issues with and no busses would be routed. The the outs now show up an all the audio tracks, but the ins still say “no bus”. What is really confusing me is that this wasn’t happening with other tracks I would just open them and they were all working properly and they were set up just as the one I’m on other than the multi-channel drum tracks coming from a instrument channel instead of an instrument track. Why do the other projects have some kind of saved VST connection that engages when I open them and this project doesn’t? More importantly is I’m still trying to get the work back from the “tracks that couldn’t be connected”.

Another thing I forgot to mention. I use Reason 6.5 and the rewire tracks disappear as well. I haven’t been connecting it lately, just working in Cubase without Reason loaded. And the Superior Drummer Instrument track disappears as well, but leaves the midi track with all the data for the drum map. It shows the other channels if I don’t choose to remove them, but if you click on them nothing shows up in the inspector column left of the channels. No fader or anything.

Still having this issue. Everything was fine for 4 days. I just got done working on the project a little, saved it, closed Cubase, shutdown my Mac, restarted, open the project back up and everything is all messed up again. Didn’t do anything different.

So, the only thing I can think of that might be causing this debacle is when I set the drums to their own separate tracks I was renaming the tracks in Cubase. Guessing it might be a glitch where it is not syncing up with SD2 and completely ditching the VST altogether. Seems a bit far fetched, but so far it hasn’t repeated the problem when I keep the original names. Not a big deal if that’s all it is. Though it would be nice if they fixed it. Maybe Cubase 6 doesn’t have that issue, but I’m not upgrading to find out.