I think this might be a minor bug. I entered this notation in a piano score into the bass clef, then used Move to Staff Above for specific notes. Then I added m.d. designations and added the line, but as you can see, the line thinks the notes are in the bass stave.

I know this is (probably) fixable in Engrave mode (I haven’t tried it yet) but I thought I’d mention it here so that Dorico might be smarter about this in a future version:

Notes that are crossed to other staves, still “belong” to their home staff. You’ll need to move the lines to the upper staff (Alt/Opt-N).

@Lillie_Harris: I have a second question which is sort of related (though not exactly). I’m entering the following bar of piano music, and they are all entered into the bottom stave, then I’ve selected specific notes to move to the top stave. I want to select the orange notes and put an 8va marking on them, however, when I do this, Dorico does nothing. Any idea why?

Use Alt+Return to confirm the Shift+C popover, so that the octave line is created on the top staff.

Thanks to you both, but it led me into mass confusion. First I selected my notes, hit shift-C, and typed 8va: 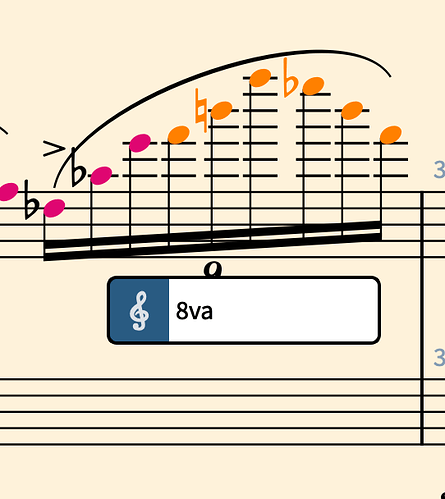 Dorico created the correct 8va line, though on the bottom stave: 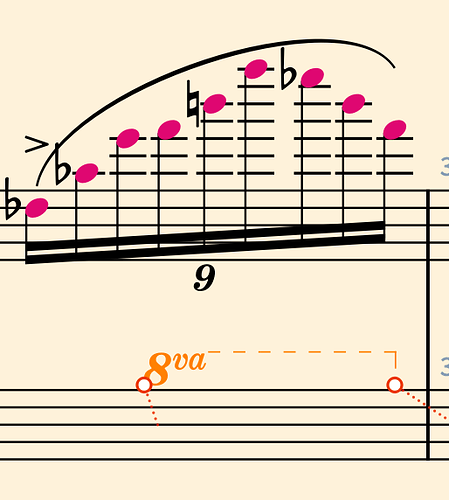 So using the trick you showed me above, I clicked the 8va sign and hit opt-N to move it to the top stave. But it did this: 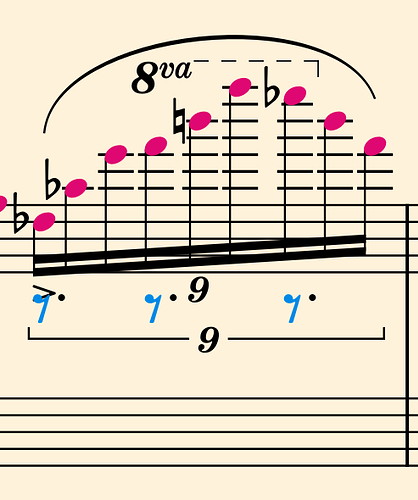 As you can see, the range of notes covered by the 8va has now changed. (I also see the blue vestigial rests, but I know how to get rid of those through Remove Rests.) I thought I could simply click on the 8va and re-extend it to where I needed, but Dorico won’t move the ending circle: 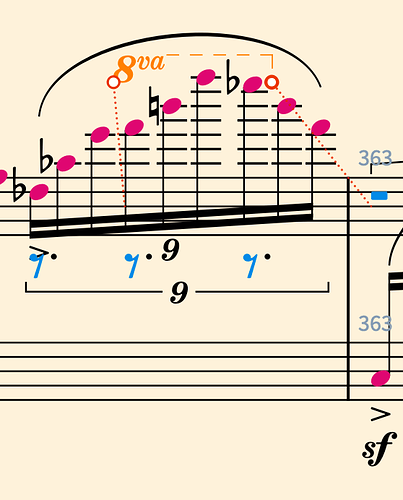 Furthermore, when I hit multiple undos, Dorico gets very confused. It starts selecting notes in different measures, and I somehow couldn’t get this bar back to its original state!

I would move all these notes to the top staff and cross the few at the start of the bar to the bottom staff. Then you won’t have any of these weird problems with the octave line.

Try Daniel’s first suggestion of closing the popover with Alt/Opt-Return, not just Return, to input a voice-specific octave line that will follow the notes (rather than an octave line that applies to a whole staff, in this case being the home staff of the crossed notes, i.e. the bottom one, which you then move up).

I know this thread seems like it’s getting complicated, and I’m trying to solve this from multiple angles but still encounter problems (and some may verge on bugs, while others are just complicated Dorico behaviors that I wish were simpler). I think this discussion is forking, so let me know if it’s your preference to create separate threads to debug separate approaches.

As things stand now, I have not entered those 9 notes directly into the top stave; they are entered into the bottom stave then I’ve used Cross To Staff Above. I did try selecting the orange notes, pressing shift-C, typing 8va, then pressing opt-return, as suggested. This yields the 8va sign over the bottom stave, not the top: 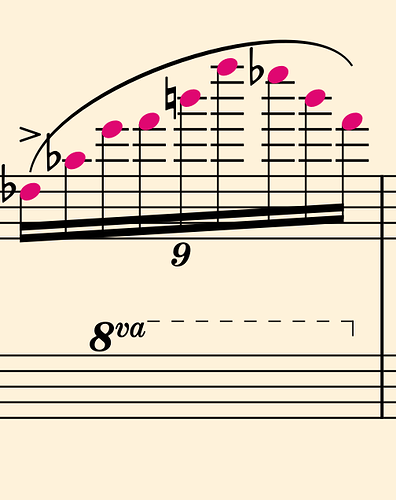 If I select the newly-created 8va sign and press opt-n to move it to the staff above, this is what results, and I would say this must be a bug because it doesn’t cover the same notes, AND has not shown the notes an octave down, AND creates vestigial rests: 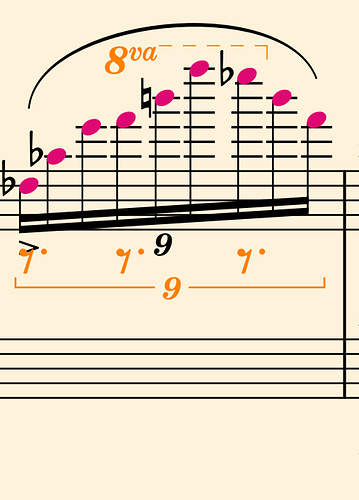 If I follow this train, my only way to fix it would be to try and extend the 8va line to the end of the bar (instead of two notes before, as shown in the screenshot), but it can’t be dragged. I still don’t know why.

At this point, I’m beyond frustrated, so I hit undo. After hitting undo 7 times, I get back to this, which is NOT my original music - the selected notes are now drawn down an octave compared to before I started doing all this! This must be a bug, right? 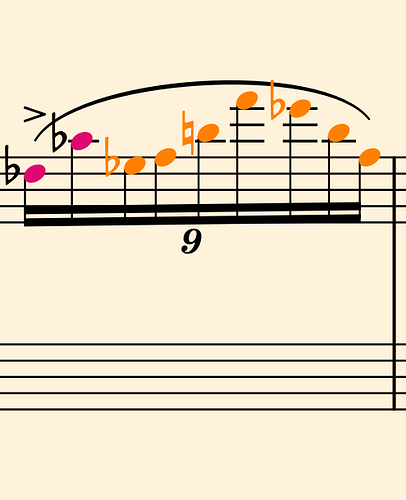 So to urgently fix this and protect the original notes in the score, I manually select those notes and use Write > Transpose to transpose them up one octave. After I do this, they look like this! Again wrong, and it must be a bug: 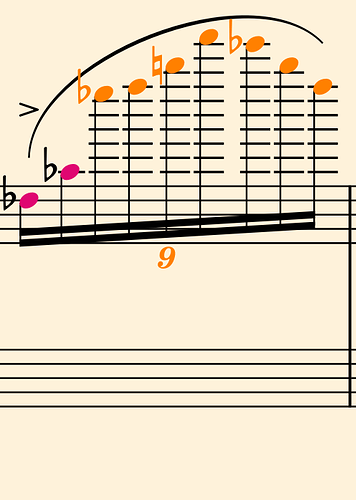 But now if I hit undo one more time, NOW the notes go back to their original place: 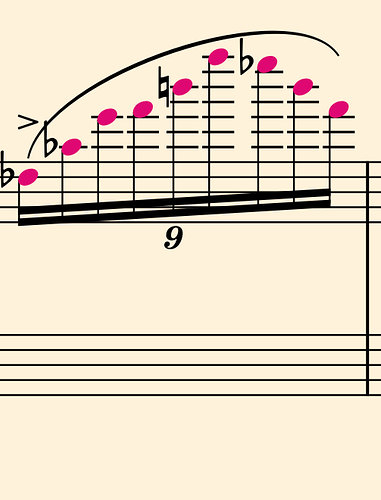 And I’m back where I started, having not solved the original problem of trying to put a simple 8va over those notes.

Currently, with all of the above approaches, these notes “belong” to the lower stave. Entirely separate from this, I’ve also tried to Edit > Cut those notes from the lower stave and paste them into the upper stave, which should be a simpler solution, but I encountered problems doing that too. I’ll refrain from posting them at this moment, because I don’t want to clutter an already cluttered thread. (I can post them later, or in a different thread.) I realize that might be the simpler solution to my overall problem, but, one problem at a time, and feel free to tell me to give up on the above approach (applying an 8va to notes that are crossed over from the bottom stave), but I did want to document [what I believe is] buggy behavior first.

@user450
Why not make copies of your original score and try the suggestions you have already been given? Then come back here to report.

If nothing else, you will then have learned a bit more about how Dorico operates.

If you’re experiencing unexpected behaviour in a specific project, share the project file as per the forum guidelines.

@Mark_Johnson: I did actually try this, but it led to a separate set of problems, so I elected to go back to the original problem and try and get to the bottom of it through the original avenue. (Sorry I didn’t mention this.) I will probably end up going with your suggestion, but didn’t want to over clutter an already cluttered thread.

@Derrek: If I’m sensing frustration in your tone, it’s because I really have been trying all the suggestions in this thread, and still find myself stymied. In the course of this (as mentioned to Mark above) I’m also trying my best to keep my presentation focused and not go into separate rabbit trails, in an effort to help you all help me.

@Lillie_Harris: good idea and I hadn’t thought of that. I didn’t realize that was part of the forum guidelines. I’m not comfortable sharing the ENTIRE massive project, but I made a duplicate of it, then removed all the other content. I’m eager to LEARN what’s going on here so I can better apply the knowledge to future scores. So here is the pruned file, with the problem piano passage in m364. The goal is to get the last 7 notes of m364 to be notated with an 8va sign.

@Mark_Johnson: In reference to the attached file in the previous post, it would be nice to learn how to migrate content to a different stave, but I’m finding that process problematic. Here’s the problem: in the current version of m364, all the notes are entered into the bottom stave (with certain notes Moved To Staff Above). So I tried selecting all of beats 3 and 4 (i.e. the 3rd and 4th group of notes), Edit > Cut to the clipboard, then double-clicking in the top stave to paste those notes into beat 3 of the top stave, and nothing appears.

This is a separate problem than all my other questions mentioned above, but another aspect of what I’d really like to learn/understand about Dorico. I can make a screen recording of my effort to do this, if it helps.

I made some room at REh. DD and moved all your notes to the top staff (ALT+N). Then I lowered the required notes to the bass clef (M without the ALT, which leaves the lowered notes still actually as upper-staff notes). Then I applied the 8va to the notes indicated in your earlier post.

@Derrek: Thank you very much for this. It looks great. So…I’m trying to understand the philosophy behind this. Am I right in saying:

(I don’t know the exact Dorico nomenclature for this phenomenon, but hopefully that’s clear.)

If that understanding is correct, then it perfectly solved my problem and I now know how to solve it in the future.

(Why my previous attempt to do the same via cut and paste failed is a separate issue, and one I’d still like to understand, but at least I’ve finally figured out how to solve the problem.)

Thanks for your patience with this.

These commands are essential for editing piano music. They also undo any cross-staffing in the process, so you can see where the whole selection ends up. Then you can cross to the lower staff as you see fit, and add the 8va line.

I recommend this method because the great majority of the notes in this bar should be in the top staff anyway.

Yes, you are right in saying that.
And I also used ALT+N (think N as in north to go up) to raise your m.d lines to the top staff, so it does not work only on notes.