Hi guys.
I am jazz musician and I only need very simple notation software to create lead sheets. That’s all.
Sounds like something simple right ? I had experience with Finale and Sibelius. I searched forums and read opinions that Dorico is more sophisticated than the other two, is much newer, better almost in every aspect and much more intuitive and user friendly BLA BLA BLA
So couple years ago I purchased Dorico ver 1. That was my first mistake. The software didn’t have midi note input and for me it was useless for long time. Since then I updated it 3 times or so and I think it might be close to $800 or more all together. I am Steinberg fan and own Cubase, Halion and other products. So I own latest Dorico and to be honest never used it. Just because it was never intuitive or user friendly. And again all I want to do is simple jazz lead sheet.
Is there anyone at Steinberg who can make a video tutorial for that?
I have been struggling with midi note input. I am getting double flats on some notes and this is very frustrating. I read couple posts but there was no explanation to this.
I attached PDF. Please compare bar 2 and bar 4. You can also have a look at the pick up bar. I read instructions and watched tutorials. I set the key to Bb major. It doesn’t help because Dorico puts notation its own way. The Bb major scale is (Bb, C, D, Eb, F, G, A). Why in bar 2 there is Double flat E instead of D which is in BB major scale??? And on top of that in the bar number 4 Dorico did outstanding job and put proper simple notation. Any help will be appreciated. I don’t want to wait couple years and paid for upgrades anymore. Can this be fixed?? Merry Christmas and Happy Holidays

For double flats and sharps, read this thread and see if it helps: Feature Request: Turn off Double Flats/Sharps when spelling a note - Dorico - Steinberg Forums

There are quite a number of excellent video tutorials on Dorico YouTube channel. But here’s one I made on just lead sheets: Creating a lead sheet in Dorico - YouTube

Thank you very much. I am going to watch them now. Why there is a difference ? If you look at my pdf. Bar number 2 and bar number 4. Same notes. Different notation. That i don’t understand at all. Bar number 2 has Db and Ebb (double flat) and 2 bars later the same phrase is C# and natural D.
Thanks

I understand why you (and other jazz musicians) don’t like that spelling, but it’s “technically” correct. It displays the melodic contour as going up, then down.

@woocaash, sorry that you’re finding note input frustrating in Dorico. Try changing the setting for Allow spelling of notes to be adjusted retrospectively on the MIDI Input page of Write > Note Input Options.

You should in general also find that Dorico will retain whatever spelling adjustments you make, so if you change the spelling of a note, the next time you input that note via your MIDI keyboard, Dorico will use the spelling you previously specified.

I really don’t understand. Which bar is “technically” correct? Or you are trying to say that they are both “technically correct”. You have the same notes and different notation. And they are going the same way up or down. There is a reason I attached my pdf. If you could just point it on my pdf or be more specific on my example that would be great. Thanks

This is the setting I tried last night and it didn’t help. Thanks

I don’t think your tutorial is relevant. I don’t want to use my mouse or keyboard for note input. I want to use MIDI.

There is an intrinsic ambiguity with MIDI, in that Dorico has to make a guess as to whether it’s a C# or a Db. Use Alt— and Alt-= to give Dorico the correct first note, then hopefully once it’s on the correct footing it’ll keep going in the same direction.

What spelling do you want to see here? My own inclination would be to spell the notes C# followed by D natural. Dorico doesn’t have a huge amount to go on, so it’s erring on the side of spelling things flat, but if you select the initial D flat and change it to C#, I expect that will help with subsequent spellings.

I don’t use a mouse either. I usually use MIDI. Computer keyboard works the same way in regards to workflow.

Daniel. You are a great guy. Can you or somebody at Steinberg take a jazz lead sheet and do tutorial how to transcribe it fast to Dorico with MIDI ? Some simple standard. Autumn Leaves, Lullaby of Birdland etc. Play the melody, play the chords and the tune should be in Dorico. How about creating new template “Jazz Lead Sheet”, or “Realbook Lead Sheet” ??? That would be awsome. Thank you guys.

I can’t remember if these are default or if I created them, but you can assign keycommands to respell notes. I use Alt and Numpad + or - to respell above or below. If Dorico guesses wrong, just quickly use a keycommand to respell it while the note is still selected. 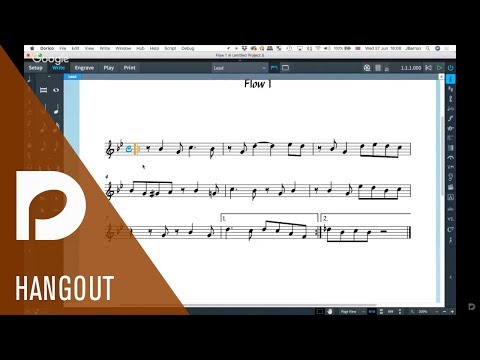 correct spelling in jazz lead sheet would be C# and D natural. You have it in the bar number 4. Dorico create this spelling from my MIDI. What bothers me is at the beginning at the flow you have exact same notes and crazy notation. Basically why Dorico is not consistent. Same notes, same pitch, same direction but different notation. Thank you

woocaash, I guess I hadn’t refreshed before posting and just saw Leo wrote to use Alt— and Alt-=, so maybe that was the default. In any case, whatever command you want can be specified in keycommands.

If you start inputting that music again, and immediately after you see that initial D flat, you type Alt+- (which is the shortcut for “respell using note name below”), it should become a C sharp, and thereafter I believe you will get the results you’re looking for without any further intervention other than playing the notes.

Agreed, but Dorico doesn’t know to spell it C# (Db is more logical as a default) until the D natural appears. With “Allow spelling of notes to be adjusted retrospectively” turned on, you can see that Dorico will change the spelling to C# once I input the D natural.

Look at the pick up bar. I am in Bb major scale. I played natural D on my keyboard and Dorico noted it as Ebb (double flat).
So why Dorico didn’t use natural D which is part of the Bb major scale to begin with ?

I didn’t change anything. It was recorded in one take. Ideally I would love to transcribe 300 songs of my repertoire to the Dorico. I have not started yet. I have to figure out a way first that will enable me to do it relatively quick. I can not spend a lot of time on one single simple lead sheet. Process should be 2 takes. First time the melody and second time chords. I still did not figure out if Dorico will allow me to put chords live in real time. Probably not but this would be ideal. I understand that there are always some cosmetic corrections after recording but 10-15 is maximum time I can spend on jazz lead transcript.