Just update to Dorico Pro 4. In a project created in 3.5, there are missing tracks in the console. Any clue? 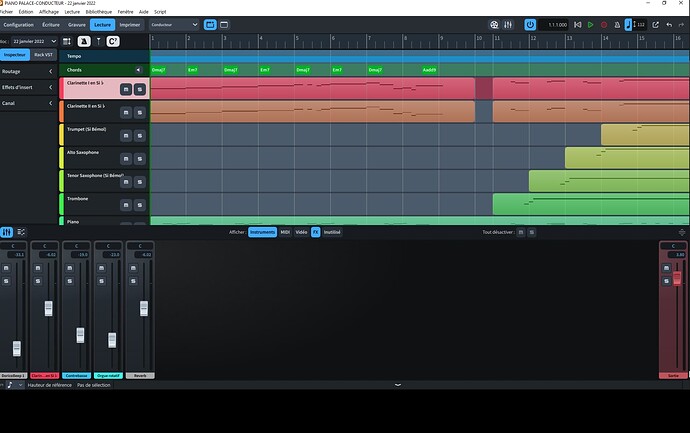 Do they play back as expected? Do they reappear if you do Play > Playback Template and reapply the playback template?

Did what you said Daniel. Lost the organ, the bass (but it was played by Halion Sonic SE). Also, my two clarinets became flutes, and my vibraphone, a piano. I corrected the instruments in NotePerformer. Everything is playing ok with the right instrument, but if I reapply the template, the flutes come back and I still miss my main piano.
Windows Pro 10, Steinberg UR-RT 4, Asus StudioBook ProArt 32 Ram, 2T

Can you attach the project here, so we can take a look at it?

It still a messy work in progress…

The audio engine data of your project shows that only one NotePerformer instance gets loaded. In Play Mode, try to do ‘Play > Playback Template’ and choose the NotePerformer template. That will build up the necessary instrument instances and mixer channels anew. Is it then okay?

No it doesn’t solve the problem. In fact, it changes my two clarinets for two flutes again. Attached are a few screen captures 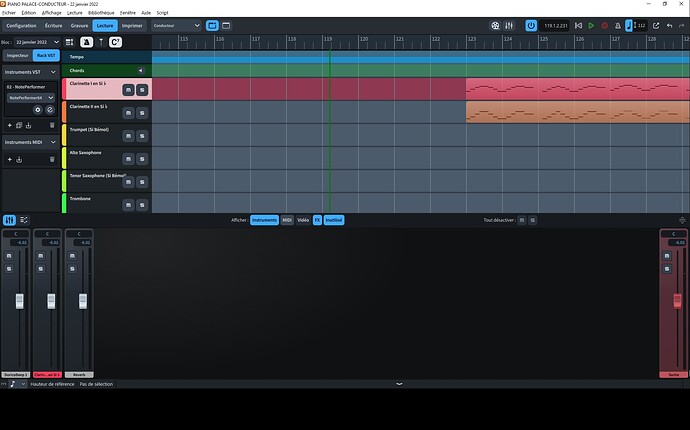 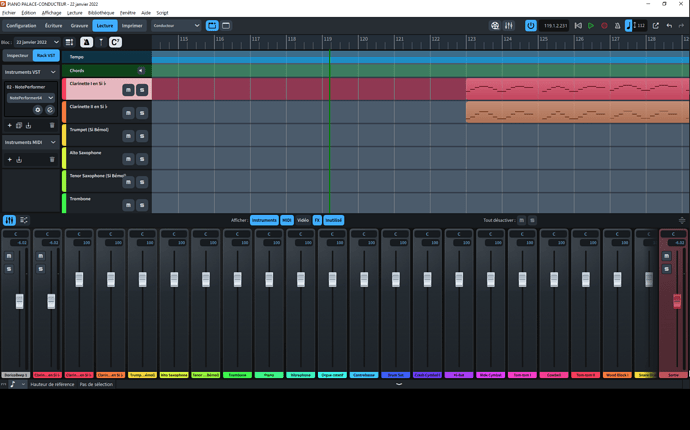 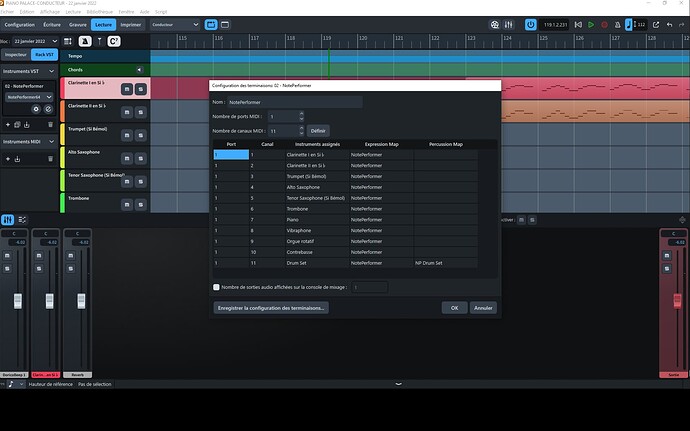 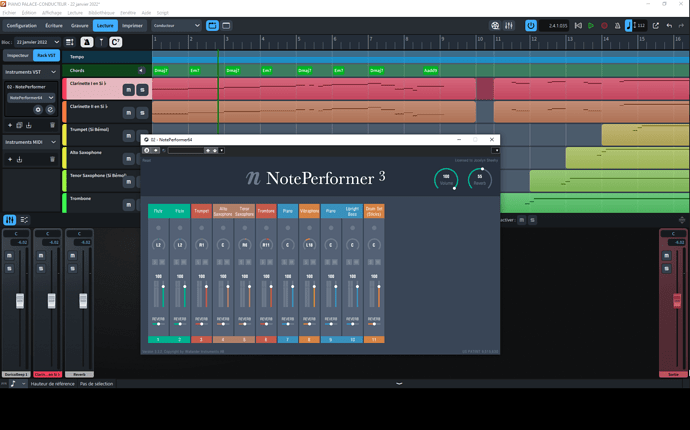 Capture d’écran (133)1919×1196 492 KB
to give you an idea. Oddly, when I click in MIDI in the console, my instruments appear… They play well (after changing my flutes to clarinets in the NotePerformer console), but no signal is showing in the console, except for the first clarinet in b flat.
Ulf January 23, 2022, 8:13pm #8

Thanks for the screenshots, but they don’t help me any further. Then Daniel or someone from the team needs to take a look at the score data, because the audio engine data looks all fine.

The reason why, say, the “clarinets” play back as flutes after you reset the playback template is because… they’re flutes! I’m not sure how you set this project up to start with, @Joss_Scarlatti, but you may want to consider using the Change Instrument feature to make sure your instruments are what they appear to be. 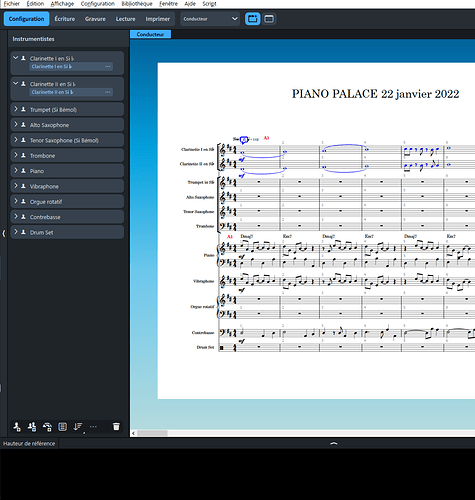 Those are flutes, I’m afraid! If you click the little … label in the blue instrument label and choose Edit Names, then click Reset to Default in there, you’ll see that the default name for that instrument is… Flute. Because it’s a flute.

But, as I said in my previous reply, you can use the Change Instrument feature, found in that same menu, to change your flute into a real clarinet, so that when you reapply the playback template, it will load a clarinet sound by default, rather than a flute sound. (The flute sound being, of course, the default sound for a flute instrument!)

Just to make sure we are on the same page here Daniel. In french it is Revenir à la configuration par défaut. I clicked that and nothing happens… Am I right or completely lost? Thank you for your help. 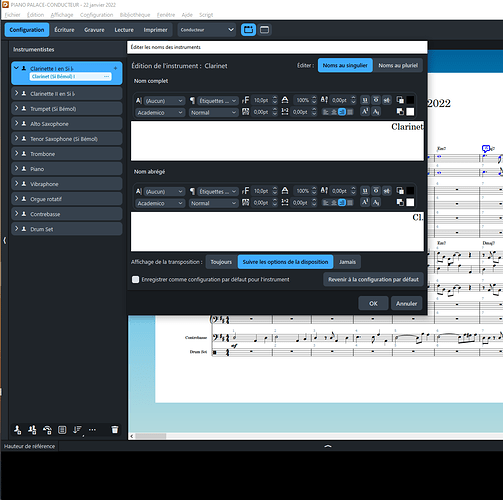 I think I know why it does nothing (the reset by default). Before you asked me to do this procedure, I had change my two clarinets for… two other clarinets (NotePerformer added two new tracks) in order to get rid of the flutes.

I had the same problem with my Organ (a piano was played instead of an organ). I did a Revenir à la configuration par défaut and, what do you know, the word Piano showed up! I did a Change Instrument and the organ is playing now.

Strange thing, in NotePerformer I deleted the two flutes slots, but they keep coming back!

It might be worth checking each of the instruments in your project to see whether they are all really what they appear to be – I only checked the clarinets.

I’ve checked all of my instruments and everything is correct now. Still, slots are missing in Dorico’s console and even after a reset, there are 2 flutes slots (and 1 piano slot number 9 that should’nt be there) that I can’t rid of in NotePerformer’s console after deleted them.
Some ghost in the machine… 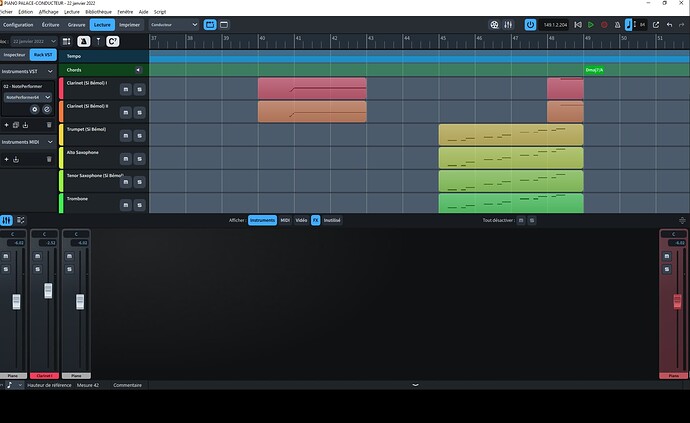 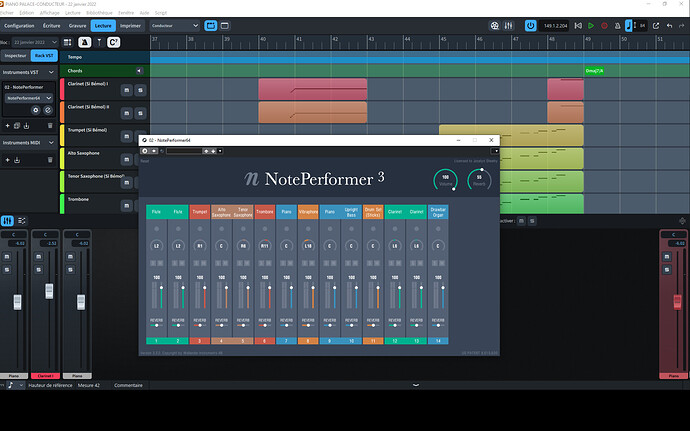 You need to re-apply the playback template. Is it w y at you’ve done?

In the Dorico mixer you will see just one track (Clarinet I) between the DoricoBeep1 and the Reverb. If you want to modify the level of the instruments you need to use the Note performer mixer.

I 've applied yesterday the Reset instrument names and and the Playback template and I don’t know why, maybe because I opened and reopened my project many times since yesterday, the NotePerformer console is perfect now and reflect exactly my configuration. Go figure…

I found strange that I have to use the NotePerformer console to modify the level of the instruments while I enjoy the nicer and more complete console of Dorico. When I click the MIDI button’console , all of my instruments are there but only one track is active (Clarinet I). It doesn’t make sense to me.

Also, I wonder if its possible to have Dorico’console always on top.