I have a 27 inch iMac, with a 22 inch second monitor that flips vertically. The plan was to be able to work on scores (I write mostly large ensemble music) on the portrait monitor and parts in on the landscape iMac. However, I find that I really need a much larger monitor for the second (portrait) monitor.

With all you composers and arrangers out there, I figure some of you must have dealt with this. Does anyone have any suggestions for the second monitor, either portrait or very large landscape?

I use a 4K 42" Dell monitor (in landscape) and am happy with it, but I do not know whether Dell sells those any more.

If you can’t find a large monitor that does rotation, just make sure it’s got a VESA mounting thingy. Then you can get a third-party mount for it, many of which allow for free rotation. (Of course, you’ll need to tell the computer what rotation it’s in in System Prefs.)

[Edit] Does that mean one can turn any monitor on its side and the SysPrefs can convert it from landscape to portrait? I had no idea that could be done. (If it can.)

It was listed as a monitor. I have a hunch it was a model they were phasing out, perhaps for lack of interest.
P4317Q, 43" Ultra HD 4K

[Edit] Does that mean one can turn any monitor on its side and the SysPrefs can convert it from landscape to portrait? I had no idea that could be done. (If it can.)

You have to do something with clever with the Alt/Option key to get System Prefs to show you that rotation option, I believe
edit: on my antiquated machine, running High Sierra, you actually have to hold down the Alt and Cmd keys while you’re opening System Preferences (!), and then keep them held down while clicking the Displays icon within System Preferences. Only then will the Rotation dropdown appear.

Really? They show on mine by default… Maybe I ‘set something’ so long ago that I can’t remember…

That should be a standard option. It has been on my macs for years. (And I’m running a 5+ yo machine now.)

Maybe it should be, but it isn’t. I’m running a 2015 machine here, and this is what my display settings look like if I don’t hold Opt and Cmd while going through System Prefs. 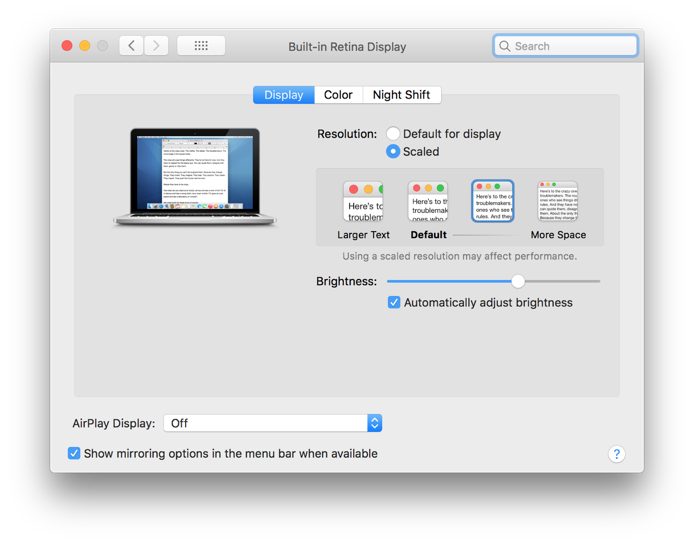 How very odd. Well, at least you discovered the trick to accessing the prefs. I wonder if it is due to not having a discreet graphics processor?

I have the same behavior as Leo on Mojave. Maybe it’s related to the fact that we both use laptops.

I have the same behavior as Leo on Mojave. Maybe it’s related to the fact that we both use laptops.

Yeah, I think it’s only available on external displays. I wouldn’t recommend putting a laptop or iMac on its side.

Ben, it’s possible on my MacBook, it just needs some extra modifier keys…

Flipping the screen display by 180 degrees makes sense if you use a foldable laptop in “tablet mode”.

Sure, but we’re talking about Macs and, to my knowledge, Apple don’t make any foldable laptops.

Sure, but we’re talking about Macs and, to my knowledge, Apple don’t make any foldable laptops.

Actually mine crashed of a high shelf pushed of by my cat some years ago, surely looked like a foldable laptop after that.

I’m writing mostly for full orchestra. I really like the idea of being able to see the full score on a landscape monitor whilst keeping other windows such as the mixer open on the MacBook Pro. Is anyone doing that and how is it. I’ve heard reports it can be uncomfortable and awkward working with a monitor in landscape mode like that?