Here’s a sample of what I want to acheive:

Here’s what happens in Dorico:

Using the move function in Engrave mode, the chords lose their proper stemming or disappeatr.

I attach a minimal example for study.

I feel I am missing something very basic. This must be something to do with the cross staff assignment of notes to begin with.

Yeah it’s not quite right. I got closer:

I placed the notes in the upper staff, Downstem Voice 1, selected them all, and set Stem–Force Centered Beam. Then I moved that second chunk to the bottom staff using M. I can’t get it totally the same though.

You can’t directly control beam corners (i.e. which side of the beam any little chunks of beam appear) so you may not be able to match the appearance exactly, but Dorico’s result should look good all the same.

I don’t follow. The example I gave shows the beaming fails, and I included the sample file as proof. Can you therefore elaborate? The secondary beams are on the wrong side of the beam and the stems dont follow through. Note sure that fits my concept ot it should look good.

I am not following this. Isn’t it a defect?

Following @DanKreider this is the best I can get:

That cannot be right.This is very normal notation. I am sure I have missed something.

The one kind of cross staff notation Dorico doesn’t really support is the type where notes appear concurrently on either side of the beam, e.g. the Ab above and the Bb below.

Everything else in that beam should be possible natively via cross-staffing up and down with M and N. The beam doesn’t need to be dragged from one side of the notes to the other, and it mustn’t be or the stems will end up on the wrong side of the noteheads.

(That said, the manuscript appears to be very liberal about where noteheads fall in relation to stems. If you’re trying to replicate that faithfully, well, er…)

No, the MS is not fussy about exact note bobble position. I notice that it’s when I add the B flat on the lower stave combined with the A flat on the upper stave it goes awry.

So am I right in my take on this: a) that particular notation can’t be done in Dorico, and I’d class that as a defect (sorry), b) I am stuck and there is no way to do this currently?

I am surprised because this is commonly used notation.

It can still be done, though; it’s just slow and laborious. 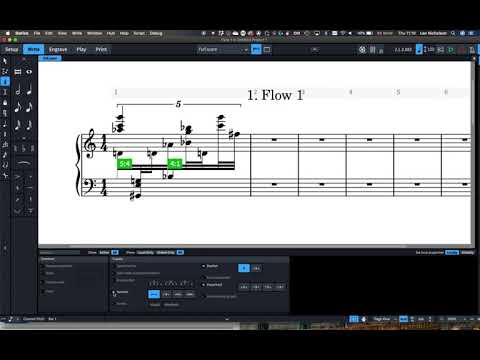 That’s really a pity, because in almost all of those cases notation is hand sensitive (meaning top staff r.h. bottom staff l.h.) so you really have to move the Bb to the lower staff. And suddenly the centered beam gets lost. And the result looks awful.

To me it looks like the composer is just keeping the notes within the staves, rather than showing actual hand distribution. But this is only part of one bar.

(That said, the manuscript appears to be very liberal about where noteheads fall in relation to stems. If you’re trying to replicate that faithfully, well, er…)

I often thought, wouldn‘t it be great if you not only could flip the stem direction, but also the stem attachment point.