When creating lead sheets for rehearsals I often add two different chords (in two rows) so the musicians can choose which one they prefer.

Sometimes I put chord symbols into paranthesis to express that a chord is optional and just a suggestion.

Both did not seem to be possible yet. Entering “(Cmaj7)” won’t add a chord symbol at all. Using Shift+X for adding “(” and “)” and move them around the chord symbol of course is a very dirty solution. And adding a second chord symbol at one position (as it’s possible with lyrics) doesn’t work as well.

Are there plans to add these features? Especially the bracket thing is very fundamental and important for me when working with lead sheets.

+1. This is really common. Flip through any of the Sher “New Real Books” for example and probably a third of the tunes have optional alterations or implied chords like this:

Because this is so common, Dorico really should support this type of notation without involving complicated work-arounds.

I don’t know if this is exactly related, but I got hung up today by Dorico’s inability to easily have chords appear slightly different in different parts. I had to transcribe and write an arrangement of Bobby Watson’s “In Case You Missed It (Fuller Love).” For much of the solo section the rhythm section is continuing the rhythmic pattern which needs to be shown clearly in their parts, but of course the various soloists don’t need or want to see that, they just need the chords. 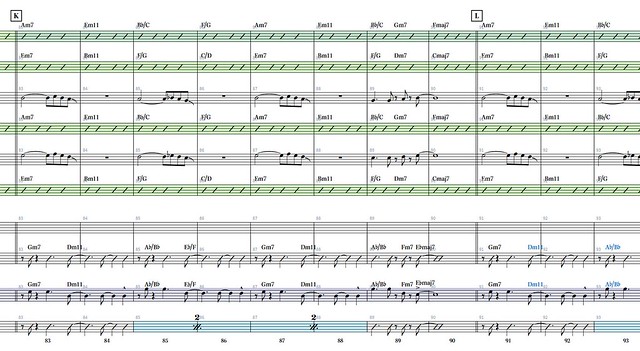 Hiding all the superfluous chords that appeared was very time consuming, not to mention that they don’t propagate so all the edits needed to be made twice, both in the score and parts. I’m not sure what the answer is here, but there has got to be an easier way to do this. Simply allowing chord symbols to propagate, or better yet auto-propagate, would at least be a huge time saver in situations like this.

I also would like to know if this is possible. I often prepare study pieces which give shell chords above extended or altered chords. The ability to do this easily would greatly enhance my work.

Daniel has intimated in another thread that “player-based” chord symbols - chords on a player’s staff which differ from the system chords - are indeed planned for the upcoming free update.

Yes, you’ll soon be able to create player-specific chord symbols, but that will still limit you to a single chord symbol at a particular position for a given player, ostensibly allowing you to choose between the global chord symbol or a chord symbol specific to that player. To produce the kind of alternative chords shown in the first post i this thread, I would probably put them in a short rhythmic duration after the main one (e.g. 1/16th note later), then move them in Engrave mode, but of course there’s a certain amount of labour required to achieve that.

Yes. Alternate chords needed on specific beats. Also ability for chord symbol to be bracketed. Surely this could be an option here

Ah, if only one could just add a checkbox to the User Interface and all the background programming would take care of itself.

No updates regarding this matter yet? You can add my vote to include this on the next update!

Local chord symbols exist as of Dorico 3.1. See page 24 of the Version History

Welcome to the forum, @R_R. We know that users need to be able to enclose chord symbols in parentheses, and this is definitely something on our list for future versions.

thanks, but to have a second chord line for substitutions would be a must,

in any case, good job

I’m not sure if I’m missing something, but I don’t see how to enter alternative chord symbols in Dorico 4 (like in Autumn Leaves as shown a few posts above). I seem only to be able to make chord symbols optional, but I can’t add alternatives.

Perhaps the wording we’ve used to describe the feature makes it sound grander than it is. You can’t add multiple chord symbols at the same rhythmic position, but you can indicate optional or alternative chords by parenthesising them.

The new alignment lines make it easy to get this;

… but now I’m left with manually adjusting the music spacing, which won’t look as good as Dorico’s default music spacing here. If 2 chord symbols could occupy the same beat with a vertical offset, that might be ideal, but a Properties checkbox to ignore for horizontal music spacing could also work if the user has to manually align the chords.

Another request for multiple chord symbols at the same rhythmic position like seen in the Sher ‘new real books’.

You can use @dankreider’s excellent MusGlyphs font (if you’re writing chord symbols in Academico) for the vast majority of chord symbols you might need.