Naming a part which has multiple players

I’m working on a score in which I have the following 3 players:

I think I set up the third part correctly: as you can see in my screenshot, the part is called “Flute 3 & Piccolo” and contains those two instruments, and if you look on the right side, I have staves for each (which are visible in Setup and Write mode, but not Print, since Print correctly condenses Flute 3 and Piccolo to the same stave). 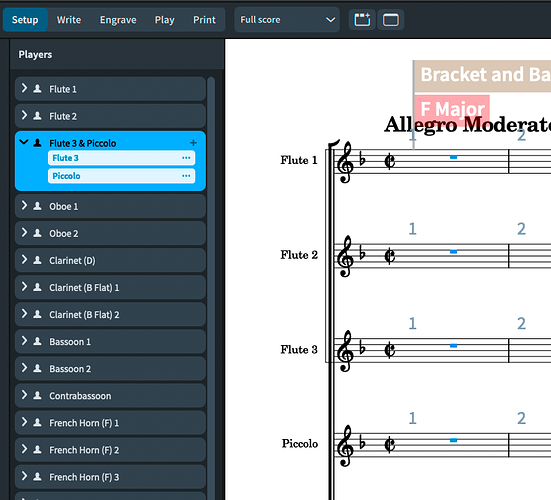 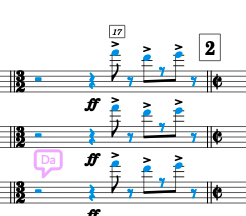 (I do correctly see, later in the score when the piccolo plays its first notes, Dorico has labeled it as “to piccolo” so that part is correct.)

But there is no mention in the score that the player should play the flute as opposed to the piccolo.

Of course there is, it’s your first picture. That’s traditionally how scores are shown, which player holds which instruments usually goes into the preface, often labeled „Orchestration:“.

But if you must, you can chose to show the player name instead of the instrument name in Layout options for the flute 3, but then you‘d have to create a text item (shift-X) in the beginning, stating the first entrance with flute.

You can also use this setting in Layout Options in a player’s part to let them know which instrument they start with: “Show instrument change label at start of flow”, very useful. 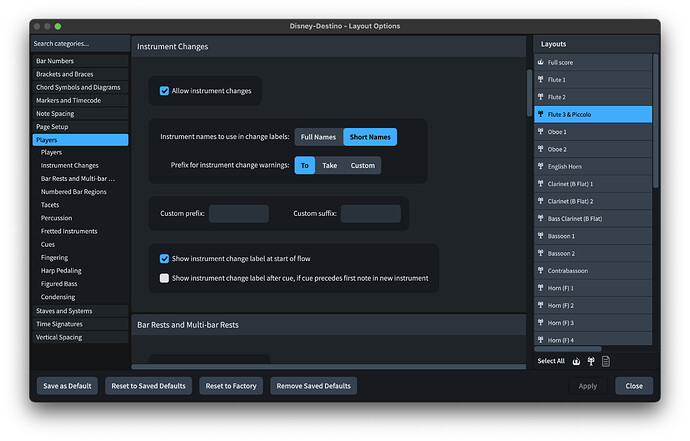 The option in Layout Options to show the player name, instead of Instrument, is here: 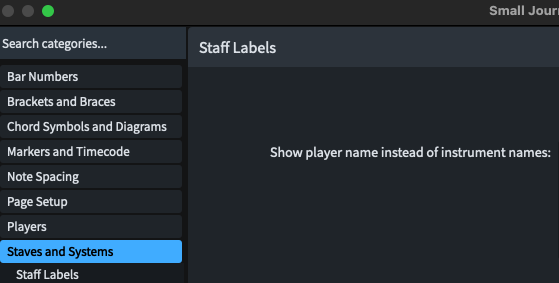 Hi. Note that you seem to be in galley view in Write mode (which reflects in Setup mode), otherwise, the piccolo staff would not appear. What you call Print mode view is actually Page view, which is also accessible in Write mode and is also the only Engrave mode view.
The other doricians have already answered the questions, as far as I know, but I felt it would be wise to make sure you understand the differences between galley view and page view when it comes to multiple instruments held by one player.

Is there any combination of settings that would show “Flute 3/Piccolo” on the first system but just the current instrument on subsequent systems?

I realize this would require an extra “Flute:” text above the first entrance if on the first system. I’m not sure this is how I would want it, but I know some scores state all the doubling in the staff labels on the first system rather than a separate orchestra list page. I just want to discuss the possibilities.

This question has escalated into a myriad of complexity, which, hopefully, the developers will notice and perhaps consider improvements for a future version. I did solve my issue, but only by manual workarounds to the existing “intelligence” built into Dorico.

First, to those who suggested I use Layout Options > Players > Instrument Changes > enable Show instrument change label at start of flow, I tried this, but didn’t like the result. Here’s why: Right at m1 on this stave, Dorico now prints “Fl. 3” - that doesn’t seem intuitive to me. I would have wanted it to print “Flute” since to the player, the choice is Flute or Piccolo:

So my manual solution is to disable that option, then go into Setup mode, and rename the first instrument inside the Flute 3 player as “Flute 3/Piccolo”; this allows the stave to be named the way I want it on the first page: 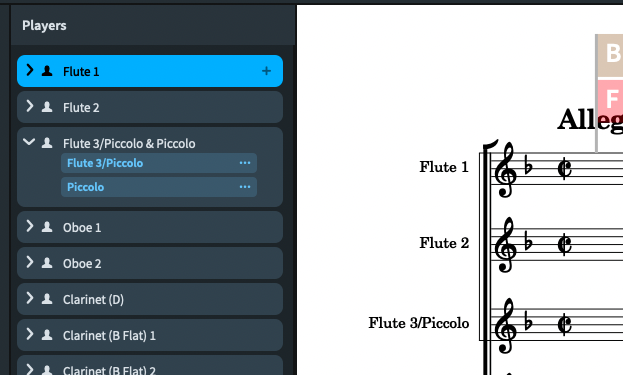 Then at the first entrance of Flute 3 in the score (m17), I manually added staff text there (shift-X) labeling it as “flute” just so it is 100% clear to the player that they are starting this piece on flute: 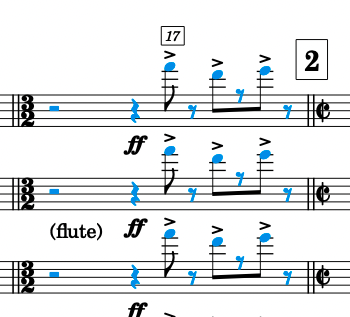 And from that point on, Dorico’s automated features take care of things for me. On pages of the full score that the player is playing flute, Dorico shows the abbreviated “Fl. 3” as the name of the stave: 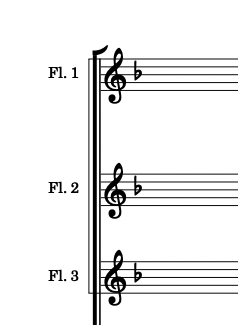 And later in the piece when this player switches to piccolo, the stave is renamed accordingly: 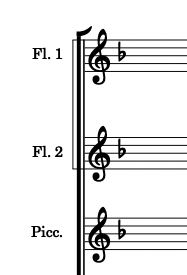 So I’ve solved it, but it was a little weird and manual, and I found Dorico’s options to be lacking.

I agree, an option to show the player name only on the first system would be nice.

Could you have just named the Instrument “Flute”, instead of “Flute 3”? (Maybe add a space to avoid auto-numbering.) And kept the Abbreviated name as “Fl.3”.??

I just discovered a problem with my workaround: now in the score when this stave changes back from a piccolo to a flute, Dorico writes in: “to Fl. 3” which is not the way I’d prefer it to appear:

@benwiggy I kind of like your idea, except now I lose numbering which is important to me. I tried renaming the short name to “Fl.” and now all my pages after page 1 look like this: 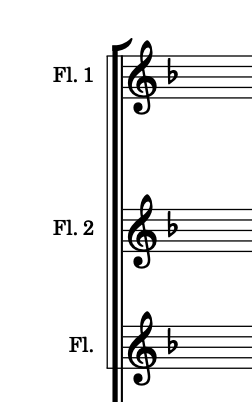 Argh. I would sure like to hear from someone on the Dorico team if there is a better way to handle this. To summarize:

• I have a 3rd flute doubling on piccolo
• I’d like the first page to show “Flute 3/Piccolo” as the staff name, so that the conductor can understand that clearly.
• I’d like the first notes of the flute to read “Flute” (not Fl. 3), although I can do this manually with staff text.
• I’d like subsequent pages to show “Fl. 3” as the staff name when the player is playing the flute.
• When the player changes from piccolo to flute, I’d like it to show “to flute” or “to Fl.” and not “to Fl. 3” (I don’t know how to override this)

Did you try my suggestion?

You should reset all your flute names in setup mode. For me it’s not the case that the player number is shown in the score, when the player changes instruments.
It might appear in your case because you have added the numbers yourself.

Then, only change the full name of the Flute 3 Instrument.

It should also lead to you being able to use the layout option instead of using staff text at the beginning of the system.

Could you have just named the Instrument “Flute”, instead of “Flute 3”? (Maybe add a space to avoid auto-numbering.) And kept the Abbreviated name as “Fl.3”.??

You should reset all your flute names in setup mode. For me it’s not the case that the player number is shown in the score, when the player changes instruments.
It might appear in your case because you have added the numbers yourself.
Then, only change the full name of the Flute 3 Instrument.
It should also lead to you being able to use the layout option instead of using staff text at the beginning of the system.

But I didn’t add the numbers myself. They appeared automatically.

You say to “reset all your flute names in setup mode.” Reset them to what?

I’m hoping someone can spell this out for me exactly, because this is getting really confusing. (For reference, I created a new Dorico file from the orchestral templates, and they are labeled the same way my file is; see below.) 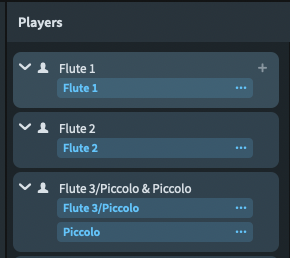 Hold on, don’t reply, I just made some progress…will post a follow-up in a moment.

I think I’ve now mostly solved it, although I have no idea how this got to be such a mess.

First, the solution: players look like this (note that the numbering of the instruments is added by Dorico, not by me):

Then I edited the name of what shows above as “Flute 3/Piccolo” and changed it to simply “Flute”, which results in this: 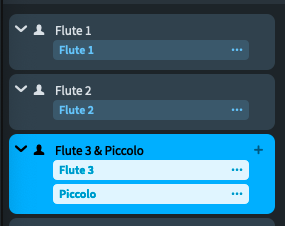 Then I double-checked the Editing Name dialog box for Flute 3 to make sure it showed this: 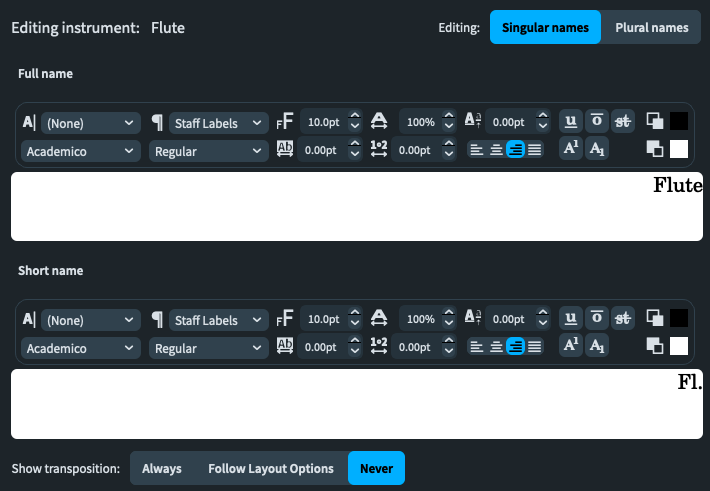 Now, within the score, things show up properly. After the flute 3 plays its first material, Dorico then shows a “To Picc” notation, then after some piccolo phrases, Dorico shows “To Fl” which is correct.

NOW…the only disadvantage to leaving things this way is that the first page of the score only shows Flute 3 and that gives the conductor no indication that this stave is for one player who is playing both flute 3 and piccolo. Any opinions on this? I would have preferred seeing both instruments listed on the first page of the score, but I can live without it if no one thinks it’s a big deal: 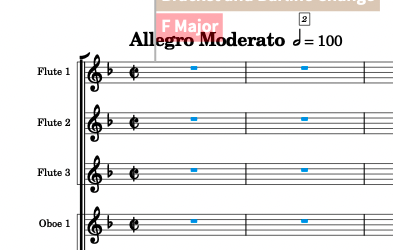 (Yes, I’m aware I could clarify this by inserting an Instrumentation page before the score begins, but still, as a conductor, I’d like to see this on the first page of the score.)

You should reset all your flute names in setup mode. For me it’s not the case that the player number is shown in the score, when the player changes instruments.
It might appear in your case because you have added the numbers yourself.

Then, only change the full name of the Flute 3 Instrument.

If you follow my instructions, you should get what you want. I tried it, and it worked for me.
To reset the instrument names, click the „reset to default“ button in the instrument name editor that you have screenshoted in one of your Posts.

@klafkid: Ah, I hadn’t noticed/found that reset to default button. Could be helpful for the future. Meanwhile, I think I’m mostly solved now, with the exception of wishing I could display “Flute 3/Piccolo” on the first page of the score, for that stave.

Is this what you want? 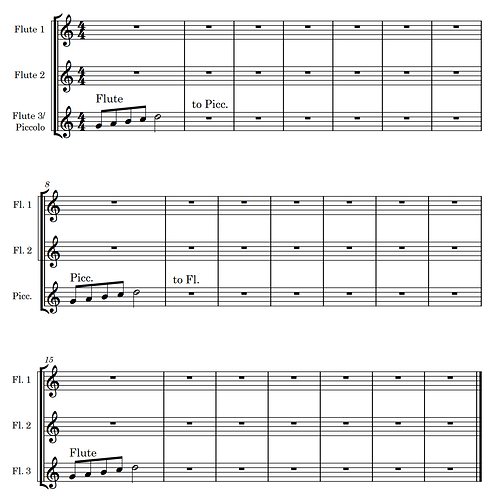 If so, here’s the file. There are a couple of little things you have to do to get that result so I figured it’s easier to just let you see the file.
flutepicc.dorico (1013.5 KB)

EDIT: Oops, I probably should have used “Piccolo” at the entry instead of “Picc.” for consistency, but that’s easy to change.

@FredGUnn that’s pretty much exactly what I want. Thanks so much for going the extra mile and demonstrating it for me. I’ll download it and reverse-engineer it into my own orchestral score!

Another oops, I was doing this fast and only focusing on the score so forgot to change the name so it will appear correct in the part layout. Obviously that’s also an easy fix.

Here’s a file with those details corrected.
flutepicc.dorico (1014.7 KB)