I’ve taken another one of Florian Kretlow’s ‘unfinished’ font projects, and worked on it a bit.

Nepomuk is a text font modelled on the punch type used in a lot of 20th-century music engraving, including Durand and post-war English publishers.

I’ve adjusted the tracking and kerning, to make it more suitable as a font for lyrics, and added lots of glyphs, including Czech and Icelandic chars, currency and copyright symbols. There’s non-breaking hyphens, other additional punctuation, and useful symbols like versicle/response.

Unicode flat, natural and sharp symbols have been added, and I’ve given them ‘easy access’ ligatures.

If anyone wants to try them out, you can find them here: 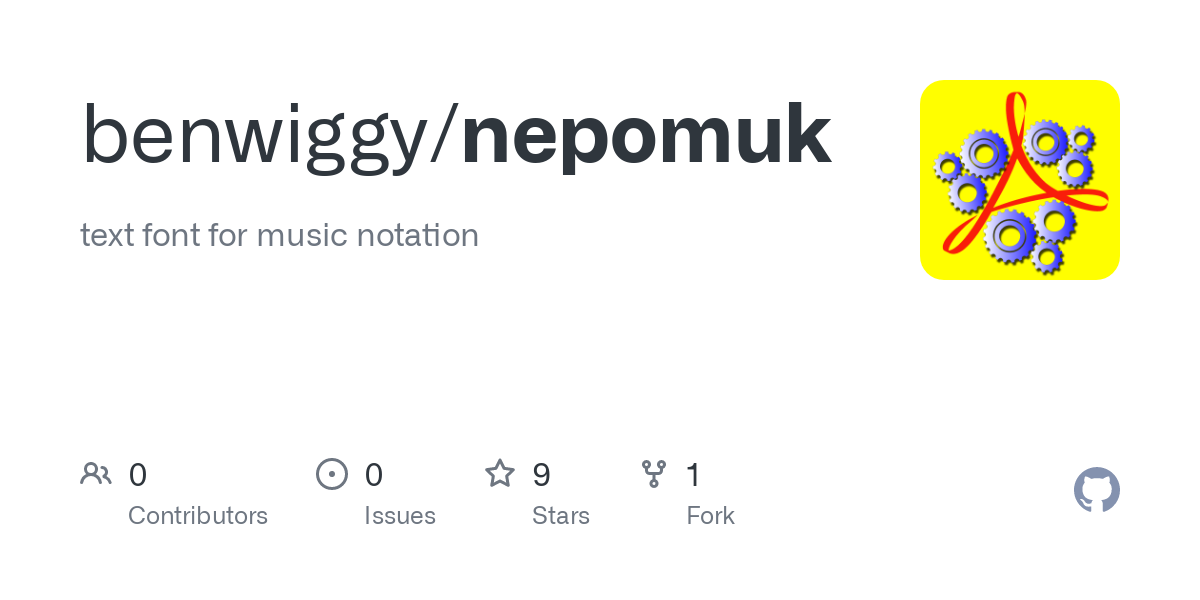 text font for music notation. Contribute to benwiggy/nepomuk development by creating an account on GitHub.

along with more sample pages. I’d be interested to know if they work well on Windows.

I’ve really found it amazing how this font seems to evokes the spirit of traditional music engraving.

Thanks very much. The addition of the bold faces now makes Nepomuk fully usable for engraving. Very classy. Using Nepomuk with the Haydn music font gives that classic pre-1900 Breitkopf look. Unfortunately Haydn has a lot of problems and it’s unclear whether it will ever be fully developed.

@benwiggy what font creation program do you use? I have always found Fontforge terribly diffilcut to use with an appalling user interface from 1970 and very poor documentation. And the other programs all seem to be USD$800.

I bought TypeTool many years ago, which is/was FontLab’s basic entry-level app. They had an upgrade sale to FontLab a few years ago, so I got it at a considerable discount.

FontLab is both amazing and terrible in equal measure. It is incredibly powerful, with all the features you can eat; but it’s prone to crashes; the devs are very slow to act/react, and the scripting functionality is a mess.

(To give some idea about the development: TypeTool is still 32-bit, so won’t work on MacOS beyond Mojave; so they’ve released “a special build for macOS 10.15 and newer, which offers Windows-like user experience on the Mac.” – they’ve basically wrapped up the Windows version in the WINE emulator…

The alternative is Glyphs, which seems like “the Dorico of font apps”. Yes, they’re all pricey. Font creation is even more niche than music notation, so I imagine the market is quite small.

FontCreator for Windows is great, and not that expensive. That’s what I use.

Just to say I’ve issued a v2.01 release, which has improved kerning, and the addition of SMALL CAPS ! in the Regular and Bold styles.

Of course, you can’t use OpenType features in Dorico yet, so…

I’m toying with adding things like Greek, Cyrillic and even IPA, and possibly some SMuFL bits. But all of that (except the SMuFL bits) will be in a longer-term fork.

Anyway, I’d be grateful if someone could confirm that it all works on Windows. Thanks.

FontLab is both amazing and terrible in equal measure. It is incredibly powerful, with all the features you can eat; but it’s prone to crashes

FWIW FontLab is rock steady on Windows - it was probably originally developed on that which is why it is less stable on Macs. They offer a good sale on it at the end of the year Black Friday

FontLab was made for the Mac first. They also bought Fontographer (the original Mac font app) from Macromedia, years ago.

FontLab 6 was supposedly a major remake (using Qt!) designed to modernize their code and make it ‘future-proof’, but the scripting is almost unusable and they claim they need another complete strip-down.

I’ve ironed out as many kerning wrinkles as I can find, and I’ve been testing the fonts pretty thoroughly over the last weeks, so unless anyone points out any problems, I’m declaring the v2.02 version the ‘stable release’.

Here’s Debussy’s Trois Chansons, done as Durand ought to have done it.

I’m leaving Greek, Cyrillic and IPA characters as a longer-term project, as there’s millions of the things.

Beautiful! Tiniest remark possible: I think @MarcLarcher would agree that you should insert modest non-breaking spaces before most punctuation marks.
And the lack of Egyptian hieroglyphics, of course.

Someone else mentioned that in another place; though it doesn’t look like the original Durand score has added extra space (though obviously the letters were freely punched onto the plate).

That’s not a rule I have heard of in print typography. It may be an obscure house style. I’d not rececommend it.

It is specifically for French in France.

That explains it! I am a miserable Anglophone.

It’s a real rule in French typography, for nice typed texts. In scores? Well, in mine… I seldom see it in historic scores, as if music engravers simply ignored that “basic” French typography rule.
Description here, for example.