I’m writing this question on behalf of a customer that bought a Mackie extender from me. Thanks in advance for your support.

My customer recently acquired a second hand Mackie Control Extender (firmware V 4) to add to his existing control surfaces. His current configuration is:

So he added the new extender (firmware V4) to this configuration.

When he turns on the extender, everything fires up correctly. When he opens up a project in Cubase SX2, all faders (in his MCU and the new extender) jump to their corresponding position satisfactorily, same as the leds in the rotary encoders in all surfaces. The names of the tracks also appear satisfactorily on the scribble board of all surfaces.

The problem happens when he presses Play and the project starts running.

At that point in time, the track names change to a line of dots in the scribble board of the new Extender (firmware V4) (I have attached a picture of the problem AFTER pressing play)

Everything else remains ok, the faders positions, the rotary encoders leds. The faders and rotary encoders also stay ok controlling the levels. The only thing that happens is that the track names change to dots (as per the picture)

He swapped his existing XT with the new one, and it did exactly the same thing.

It’s important to note that this Extender was satisfactorily working with Logic 9 in a Mac Mini 2012 just a few days ago.

Thanks very much for your help! 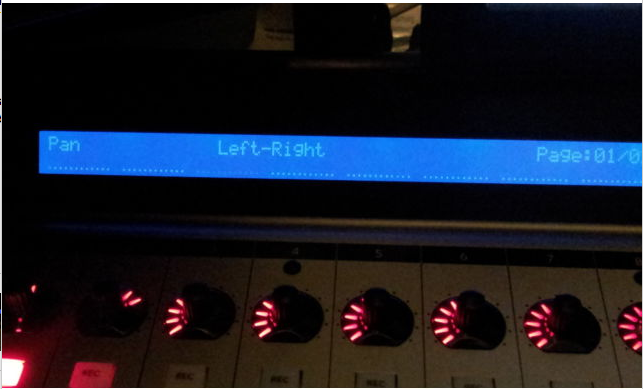 From the Manual (P.435):
If you have more than one remote device of the same type, these will be numbered in the Devices list. For example, to be able to use a Mackie Control Extender, you must install a second Mackie control device.
Also, there are two modes available from the Mackie Device popup (menu-Devices) “compatability” and “Cubase” you’ll probably have to set for the compatibility mode.